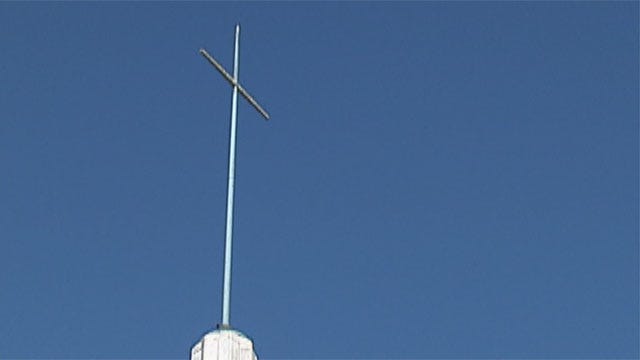 A battle is brewing between the Catholic Church and the Obama administration over a new mandate from the federal government.

Churches across the country, including churches in Oklahoma, are sounding off over being forced to fund abortions. Catholics are getting an earful from the pulpit. The archbishop of Oklahoma City is calling on followers to stand up for a change.

At Little Flower Church in southwest Oklahoma City, the congregation is small, but the voices for change are big and growing louder.

"I can't see taking our religious rights away," one parishioner said,

The outrage is over a recent federal mandate that will force all employers, including the Catholic Church, to offer health insurance to employees that will cover contraception, sterilization, and drugs to force abortions.

"This is a direct assault on the religious freedom of Americans," Oklahoma City Archbishop Paul Coakley said.

Coakley says the mandate is of deep concern.

"They have given us one year to comply, which is no concession at all," Coakley said. "If anything, it's an insult. It says you have one year to prepare to violate your conscience."

"Anything that would coerce us as followers of Christ to contribute toward or fund the ending of life, we're not big on that, and we're going to oppose it," Melton said.

On the other side of the issue, Planned Parenthood of Central Oklahoma says in a statement, "This decision is based on sound medical science. It means that millions of hard-working women will have access to affordable birth control."

No matter the debate, experts say the mandate will undoubtedly face court battles. In the meantime, the Catholic Church says it's prepared to follow its teachings over what it calls an unjust law.

The mandate will go into effect in August. The Catholic Church is asking its followers to contact members of Congress to voice their concerns.