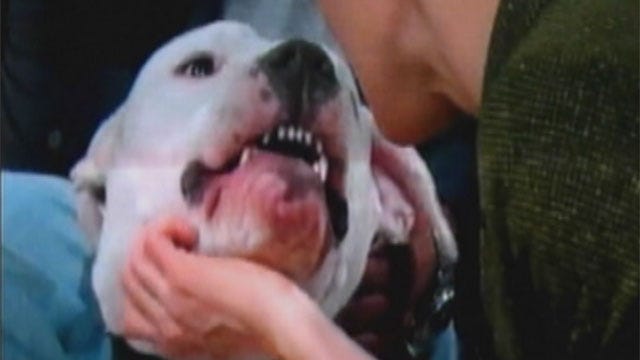 A disturbing video has gone viral after a dog bites a Denver anchorwoman on live television. The attacks seemed to come out of the blue but one canine-behavior expert watched the video and felt all the warning signs were there, if only someone understood what the dog was trying to get across.

Susanne Shelton is the owner of Clickety Split Dog Training. For decades she has worked with dogs one-on-one and in groups focusing on behavior modification. She says body language was the key to avoiding this incident. She watched the video of the attack and pointed out some warning signs.

"When you see the communications of the dog, you realize that this could very well end badly," said Shelton as she watched a clip of the attack. "They don't realize that the bite is coming."

She paused at the very moment the dog committed to the bite. It took only a split second, but Shelton thought this bite, like most other dog bites, could have been prevented.

Shelton rewound the clip and paused about 30 seconds before the bite occurred, "Here we've got the tongue flicks. I've counted four, that might be five, six, seven and then we have these cheeks that are pulled so far back."

The tongue flicks, according to Shelton, are a big warning. She looked up several other dog bite videos and all of the dogs show the same behavior. She described it as the dog trying to lick something quickly off of its nose. The cheeks are another big sign to watch out for. In this particular case, the viewer can see the dog panting with its cheeks pulled back. Shelton explained that because the dog was in a cool studio, his panting meant he was nervous.

"At this point, he's looked away from her and this is a classic canine behavior that dogs will do if they're alarmed by our actions," Shelton explained as she continued with the video. "The ears back, the eyes, at this point you can see the white of his eye."

When the dog looked back, Shelton said it had already made up its mind and the bite was a last resort to gain back its personal space.

"This is too close to be to any dog you don't know. It's just too close," explained Shelton. "Now he's decided, so his lips are coming forward and he's making an offensive pucker."

Shelton reacted with a "boom" as the dog snapped at Kyle Dyer. Dyer needed some 70 stitches and a skin graft as a result of the bite. As bad as that is, Shelton said it could have been a whole lot worse.

"He immediately released her," she explained. "If he'd wanted to maintain his hold on her or to shake her or to do more damage to her, he absolutely could have."

Shelton said she believed, from the evidence in the video, that the dog's goal was simply to get Dyer out of its face, not to inflict serious injury. She likened the bite to a person slapping another to get them away, but said a dog's only weapon or defense is its bite.