Bicycle Sharing Program To Start In Downtown OKC In May Rental Bicycle Program To Start In Downtown OKC In May 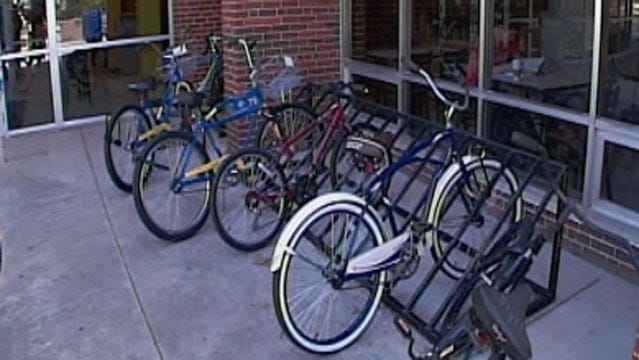 Cities across the country are turning to two wheels instead of four to get around. Oklahoma City is the latest to consider a bike share program. It will start in the downtown area.

The bikes will be available at stations in downtown Bricktown and Midtown. One will be on the southwest corner of the Cox Convention Center.

Residents can use a credit card to rent a bike for the day.

"You can think of it as another form of transit," said Jennifer Gooden.

Traveling around downtown Oklahoma City will no longer be limited to four wheels or two feet.

The city is starting a bike share program called SpOkies.

"If every person would get out of a car and onto a bicycle, it improves street life and helps burn a few calories," Gooden said.

The city is modeling it after the Bum-A-Bike program the University of Central Oklahoma started four years ago.

"We've grown from ten donated bicycles to a full blown program of over 110 bicycles owned by the university," Tim Tillman said.

It's made life easier for faculty and students. This student has been taking advantage of it for three years.

"This time of the year when the weather is nice, I like to cruise on in," Tramica Foster said.

They can check a bike out for two weeks.

"The bikes are in constant circulation. They are always out," Tillman said.

He thinks the program will be just as popular in the downtown area. The city is paying for the startup costs through a federal grant and will rely on residents for the rest.

"The cost to operate it will be paid for by membership and user fees and sponsorships of the program," Gooden said.

The city will use the same heavy duty bikes that UCO uses, and the program kicks off in May.

The University of Central Oklahoma holds the maintenance and assembly contract for Oklahoma City.

Bicycle Sharing Program To Start In Downtown OKC In May