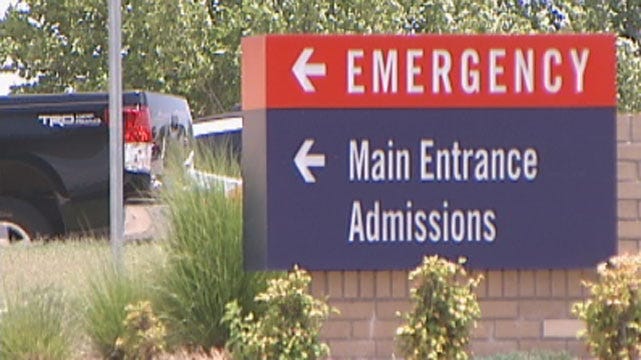 A metro mom is outraged about the way she says a local doctor treated her daughter. She says her daughter was raped over the weekend. And when they came in to seek treatment and get a rape exam, the doctor refused to help them.

It's hard to imagine being turned away for a rape exam. But it turns out the nurses who specialize in those exams rotate every month to different hospitals around the metro. They are called Sexual Assault Nurse Examiners (SANE) and they are specially trained to conduct those exams.

However, that's not what this mother is angry about.

The mother said she and her daughter did file a police report about the rape. She's angry that she brought her 24-year-old daughter to the Integris Canadian Valley Hospital emergency room on Sunday, and that the doctor who came in and saw them refused to do any sort of exam or to provide them with any emergency contraceptives.

Not only that, she says the doctor was less than sympathetic when dealing with her daughter, even though she was told she was a victim of a rape.

This mother does say she and her daughter were treated much better when they went to Integris Baptist Medical Center in Oklahoma City and that they did get a rape exam done.

We know the mother was encouraged to file a complaint against the doctor.

YWCA SANE are trained in the proper collection, preservation, and documentation of evidence. They offer a unique contribution to forensic investigators by providing a comprehensive, objective physical examination for victims of sexual assault. The collaborative efforts of the all the agencies involved in the program ensure the evidence is collected without re-traumatizing the victims

Victims of Sexual Assault should receive STI Tests/Pelvic exam within two to three weeks of assault and HIV Tests at 6 weeks, 3 months, and 6 months after assault. Victims can file a claim with Victim's Comp for reimbursement of costs for these treatments.

"The INTEGRIS Canadian Valley Hospital Emergency Department personnel wanted to ensure that the patient was examined and treated appropriately for rape as coordinated through the SANE program. The Emergency Department staff confirmed that a specially trained Sexual Assault Nurse Examiner (SANE) was on call and available at INTEGRIS Baptist Medical Center. The patient was told that she should go to that ER for treatment. The YWCA SANE program is a collaboration between the YWCA, Metro Area Law Enforcement, Oklahoma County District Attorney's Office, and three medical centers: Midwest Regional, INTEGRIS Southwest and INTEGRIS Baptist. While YWCA Hospital Advocates provide emotional support for victims, specially trained Volunteer Sexual Assault Nurse Examiners perform forensic examinations following sexual assault or rape. SANE's are specially trained to properly collect, preserve and document evidence of sexual assault; all without re-traumatizing the victim during the extensive exams."