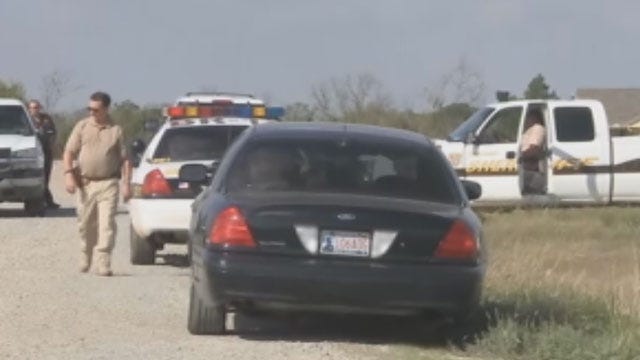 A 12-year-old girl took matters into her own hands during a home invasion in southeast Oklahoma.

It happened on Wednesday when the girl was home alone. She told police a stranger rang the doorbell, then went around to the back door and kicked it in. She called her mom, Debra St. Clair, who told her to get the family gun, hide in a closet and call 911.

That was when St. Clair dropped what she was doing and raced home.

"I drove home at a really fast pace to try to get to her, and when I got here the police were already here. And they had the suspect," she said.

During that time, the intruder made his way through the house. St. Clair's daughter told deputies the man came into the room where she was hiding and began to open up the closet door. That was when the 12 year old had to make a life-saving decision.

"And what we understand right now, he was turning the doorknob when she fired through the door," said the Bryan County Undersheriff Ken Golden.

The bullet hit the intruder, who deputies identified as 32-year-old Stacey Jones. He took off but did not get far before officers took him down.

"He was sitting down, the policemen had him apprehended at the end of the block. All I saw was some blood coming down his back. I'm not exactly sure where his injury was, but I saw some blood there," explained St. Clair.

Jones was taken to a Texas hospital by helicopter after the incident. An investigator on the case said Jones was released from the hospital Thursday and extradited to the Bryan County Jail.

The 12-year-old girl was not injured during the ordeal.