Surgery Scheduled For Dog Thrown Off Bridge In OKC 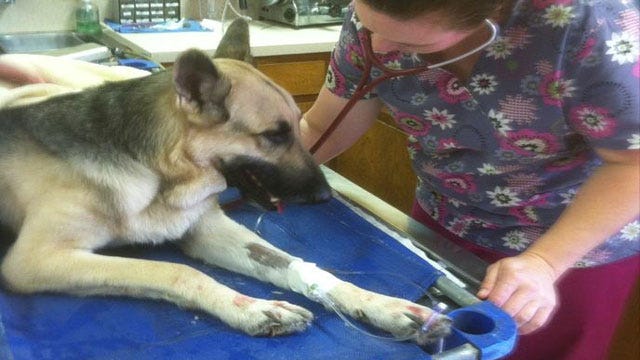 A German shepherd who was thrown off a bridge in Oklahoma City will undergo surgery on Monday. The dog is currently in stable condition, according to the Oklahoma County Sheriff's Office.

The German shepherd named "Rookie" was thrown from a bridge on S.E. 59th Street down to Interstate 40 on Wednesday. An Oklahoma Highway Patrol trooper pulled him off the road. A truck driver reported seeing someone throw the dog off the S.E. 59th bridge.

Deputies say Rookie received several injuries, including an open fracture to his rear left leg. He is also suffering from internal bleeding. He has been transported to the Oklahoma State University Veterinary College Teaching Hospital to be treated for his injuries.

According to the Sheriff's Office, Rookie will undergo surgery on Monday. Veterinarians will attempt to repair and save Rookie's shattered leg.

12/6/2012 Related Story: Dog Survives After Being Thrown Onto I-40, Investigation Underway

Authorities are still looking for information from the public regarding the animal cruelty case. If you saw the crime or have information about it, call the Sheriff's Office at (405)-869-2501.

The Humane Society of the United States has agreed to cover all veterinary care costs for Rookie, and is offering a $2,500 reward for information leading to the arrest and conviction of the person responsible for this crime.

Surgery Scheduled For Dog Thrown Off Bridge In OKC