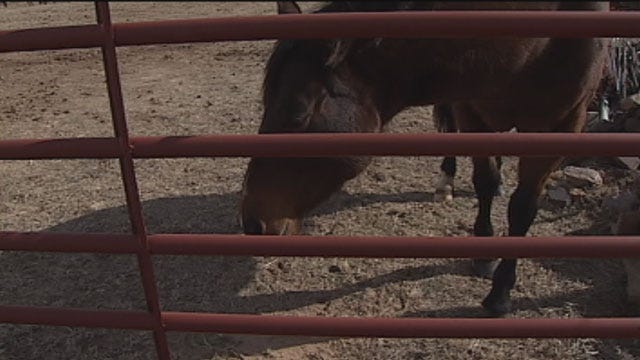 Oklahoma may become the latest state to allow horse slaughtering. A bill is quickly making its way through the legislature. In fact, critics say lawmakers are trying to pass the controversial measure before public opposition can mount.

Horses are a part of the family for many horse owners. So to them, the idea of allowing horse slaughter in Oklahoma is inhumane. But the author of one of the bills that could repeal the horse slaughter ban says since horses are so valuable in their lives, there's no reason they shouldn't have value in death.

"To me there not like animals, they're more like friends than anything else," said Ray Betts, an opponent of the slaughter bill.

Betts loves his two horses Drifter and Hope. If one of his horses got sick or injured, the idea of putting them down is out of the question.

"There really should be a much more noble (sic) end for an animal like this than to end up in a slaughter house or on someone's dinner plate," Betts said.

But some Oklahoma legislators want to repeal the state's 50-year-long ban on horse slaughter, and make horse processing plants legal as long as the meat is sold overseas.

"These horses have a value as a life animal. They are very well cared for. There's no reason they shouldn't have a value after their usefulness is over," said Rep. Skye McNeil.

McNeil is one of the co-authors of house bill 19-99. She says more than 150,000 horses are being shipped across the border.

"We need to be protecting those 160,000 horses, by having regulated facilities in the U.S. that are USDA regulated," said McNeil.

But to many Oklahomans, horses are a part history that should be respected.

Monday afternoon in Oklahoma City, horse advocates will voice their opposition to the two bills. Both bills are headed to the house and senate for approval.