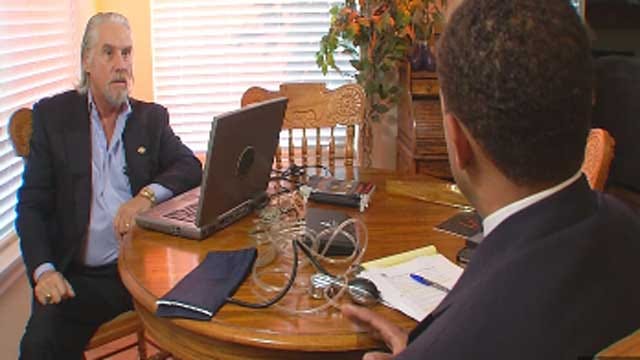 Federal agents investigate a metro instructor who teaches people how to pass lie detector tests. The former OCPD cop has publicly said for more than four decades that the spikes and dips on a polygraph do little to unmask a lie.

Doug Williams spent nearly 10 years as an Oklahoma City police officer, and at the time was in charge of the polygraph internal affairs department. Now, he's known internationally as the only licensed polygraph tester that has ever told the "truth" about the polygraph.

Williams has appeared on various network news programs over the years including 60 minutes, CBS Evening news, and CNN. But after more than 40 years of teaching polygraph-beating methods, Williams says this is the first time he's been approached by federal agents.

He thinks he may know why.

"Two or three months ago I wrote this book, and I rubbed it in their face," Williams said.

William's book, "From Cop to Crusader" tells his story of the fight against what he calls, the dangerous myth of lie detection.

"And I proved that I can teach a person how to control every tracing on that chart, and the only thing they will see is a truthful chart," Williams said.

Federal agents have tried to bring Williams in for questioning, but Williams says he's been advised against it by his attorney.

According to a report from the McClatchy Washington Bureau, Williams is one of two instructors who are part of a federal criminal investigation. Williams says the polygraph has been a sham since it was invented nearly 100 years ago.

"They've got me scared, but not enough to shut up," Williams said.

Williams says 65-percent of the time, even after passing a thorough back ground investigation, people are disqualified because they failed a polygraph test.

News 9 will keep you posted on the investigation.