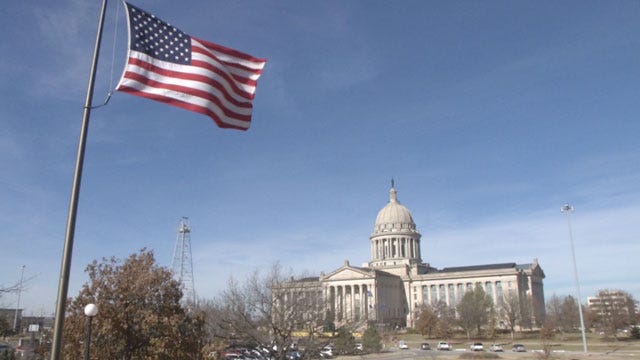 Take Shelter Oklahoma has taken its petition from the classroom to the courtroom.

On Wednesday, supporters of the $500-million bond issue appeared before the Oklahoma Supreme Court. The group is asking the court for clarification. Right now they are about 40,000 signatures short.

Take Shelter Oklahoma had 90 days to collect around 160,000 signatures in support of its petition. Those 90 days were over Monday, but the supporters of the petition say that deadline is not official.

"They're playing their political games…and I'm caught in the middle of it," said Danni Legg.

Exactly six months and 29 days after Legg's 9-year-old son perished in the May 20 tornado. Now she stands at the steps of the Oklahoma Supreme Court.

"If we do not get shelters in schools, then my surviving two children are completely at risk in their schools," said Legg

Legg and others with Take Shelter Oklahoma are asking the court to clarify the timeline to collect signatures of supporters for the shelters.

"We think the attorney general missed his deadline and we have to wait for the Supreme Court to tell us when those 90 days started and stopped," said attorney, David Slane.

In Wednesday's hearing, Senior Assistant Attorney General Neal Leader stated his office did not see the proposed ballot title until Sept. 20. Seven days later, Take Shelter Oklahoma claims that ballot title was denied by the attorney general until Sept. 27, which they claim is two days too many past their original submission date.

"Their ballot is insufficient, illegal, and can't be used," said Mark Nestlen.

Nestlen and Take Shelter Oklahoma did not agree with the attorney general's proposed ballot title which led to this appeal.

"We think their ballot title is defective and either go with ours or the courts," said Slane.

So with no official ballot title, supporters of Take Shelter Oklahoma feel their 90 day clock has yet to start.

"I pray the court straightens out the mess that has been created by that office," said Legg.