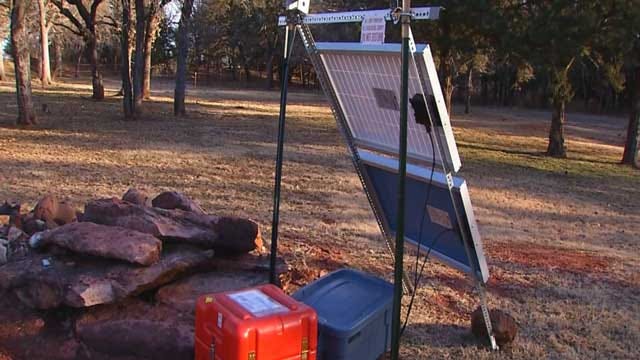 Many residents across the metro have been experiencing multiple earthquakes daily. The state has recorded more than 30 small quakes rattling on Monday alone, not including Sunday night's 3.8 that hit near Guthrie.

Scientists have recently placed a detector in Guthrie to better track the spike in activity there.

Guthrie has been at the heart of all the recent earthquakes reported in the state. With multiple epicenters scattered throughout area, scientists have placed a seismograph in town.

The latest earthquake numbers rattling Oklahoma continue to rise, and seismologists are working to keep up.

"Earthquakes tend to occur in the same places for a while, and then they'll move on, but right now, it seems to be the Guthrie area that's having a fair amount of earthquakes," Seismologist Austin Holland of the Oklahoma Geological Survey said.

Holland said earthquakes often move in spurts. And while some time ago, many felt them in Harrah and in Del City, they've now moved north.

Residents said they don't have much of any damage from the quakes, but they're hearing them loud and clear before they feel them.

"When you're local to them they generate two types of waves, a p-wave and an s-wave, and when you're right on top of the earthquake, all you're going to experience is just this boom as the s-wave comes from underneath your house," Holland said.

To keep track of the latest seismic activity, Holland placed a seismograph from the U.S. Geological Survey in one Guthrie family's back yard.

"Just a computer that records the vibrations in the ground and sends them to our office so we can analyze them," Holland added.

The homeowners said they hope the new technology will get to bottom of why their area keeps quaking.

The seismograph has been placed at Tammy's home in rural Guthrie, where she has lived for two years.

"I have pots hanging in the kitchen and they shake, but it only lasts for like a second or two, but it's over, but it's real startling."

Tammy said even stranger is how when she is in the house, she can feel them, but when her husband is outside, he said he doesn't feel a thing.

Seismologists have asked that whenever you feel an earthquake, you report the time and location on their web site so they can keep track of all the areas.