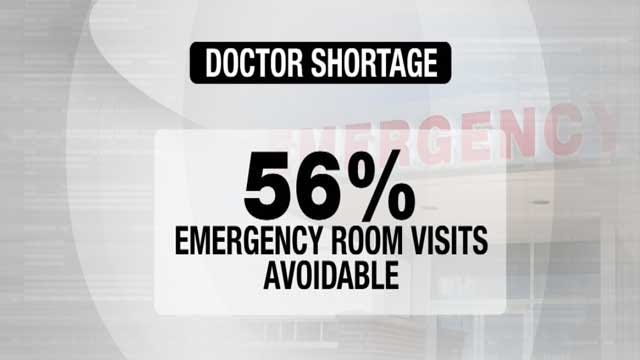 When Laura and Jon Cotner moved here from Tulsa last summer, they knew they would have to make some adjustments. Life in rural Oklahoma may mean less traffic and less hassle, but it generally also means less choice.

But when it came to doctors, there wasn't even one.

"It's just a different kind of world out here," Laura Cotner noted.

In Tulsa, the Cotners had their pick of doctors, for themselves and, most important, for their young son.

"The best part was," Laura grinned, "It was right around the corner!"

Alva, the county seat in Woods County, is certainly large enough (approximate population 5,000) to have family doctors. The problem is the few that do practice in town are overloaded.

Laura Cotner discovered that for herself a few months ago when 4-year-old David got sick, and she called the local doctor's office that friends had recommended.

She said they told her they would, at some point, be able to see David, but it might be a while. Cotner didn't think it was smart to wait.

"I was able to eventually find [a doctor] out in Cherokee, which is about thirty minutes away," said Cotner. "But it was a good drive, and luckily they were able to get us in."

An executive with the Oklahoma Primary Care Association said at least the family didn't give up and made the extra effort to find a doctor. Many in rural Oklahoma facing similar circumstances would let the illness go.

"What happens then," said Judy Grant, OPCA Deputy Director, "it goes unchecked, untreated, and then they show up in the emergency room, doubled over with some horrible thing that can't be reversed."

It's estimated 56 percent of emergency room visits are potentially avoidable. That's a waste of about $38 billion annually.

A major factor in America's over-reliance on the ER is lack of access to primary care, and access in Oklahoma is ranked near the bottom. One recent publication had Oklahoma 48th in the nation for access to family doctors.

"We need doctors," said Grant. "We need clinicians that know the value of providing good primary care and preventive care to Oklahomans."

Experts said part of the solution lies at the state Capitol. State lawmakers, they contend, could help the situation by approving incentives, like loan repayment programs, to get more young doctors to practice in rural areas.

Another part of the solution is already in place in Ramona, Oklahoma -- population 564.

The University of Oklahoma Medical School's Rural Residency Program operates out of Ramona, and Dr. Mike Woods runs it.

Dr. Woods understands the problem as well as anyone.  He said 20 percent of Americans live in rural communities, while only nine percent of doctors practice there.

"So we have dire shortage problems," Woods lamented, "and Oklahoma is one of the worst in the whole country."

Woods said, in the program's 15 years, they have put more than a dozen family doctors in small towns. He said he's chipping away at the problem, one resident at a time.

"I always see myself practicing in a small town," Ryan Forbess, one of the residents, said.

Forbess is currently the chief resident in Ramona and said there's reason to think the shortage of doctors in rural America could soon start to get better.

"I am starting to see, based on the last couple of years, more of a shift toward people wanting to look at primary care," Forbess stated.

The key though, experts admit, is getting them to open practices in places like Alva, so families like the Cotners have better access to primary care.

"I mean, my child is the most important thing to me," emphasized Laura Cotner. "I want to make sure that he's always okay."