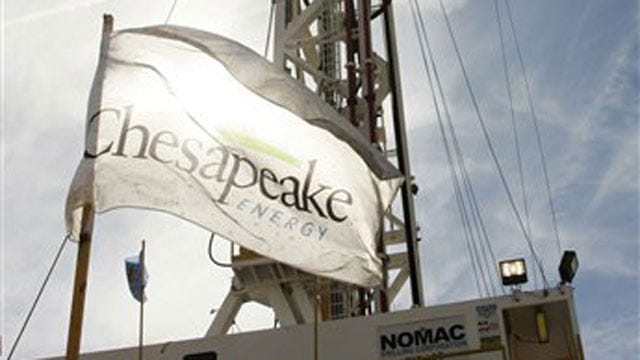 The Aubrey McClendon era at Chesapeake Energy isn't over just yet.

On Wednesday, Michigan Attorney General Bill Schuette filed criminal charges against Chesapeake for business dealings allegedly carried out in 2010 when McClendon was still running the oil and gas company.

In addition to Chesapeake, charges were also filed against Delaware-based Encana Oil and Gas USA.

In a news release, Schuette said, "I will aggressively prosecute any company who conspires to break the law."

The charges stem from an October 2010 public auction of state-held oil and gas leases by the Michigan Department of Natural Resources.

Chesapeake and Encana were primary bidders at the auction, and the leases sold, on average, for less than $40 an acre. Just five months earlier, at the May auction, the companies paid $1,510 per acre.

A 2012 Reuters news story uncovered communication between Chesapeake and Encana executives -- following the May auction -- in which they seemed to show a mutual interest in avoiding bidding against each other in the October auction. Such conspiracy could be deemed a violation of U.S. antitrust law.

In the wake of the story, Chesapeake's Board of Directors brought in independent counsel to investigate the allegations. That investigation concluded the company's activities did not violate antitrust laws.

Attorney General Schuette filed "one count each of antitrust violations relating to a contract or conspiracy in restraint of commerce, a high court misdemeanor" punishable by a fine of up to $1 million.

Each company also faces one count of attempted conspiracy, a misdemeanor carrying a possible fine of $1,000.

"It is disappointing that the Michigan Attorney General has filed these charges against Chesapeake regarding leasing activity in Michigan in 2010. No agreement was ever reached between Chesapeake and Encana. As previously disclosed, a thorough investigation conducted by independent counsel retained by Chesapeake's Board in 2012 concluded that Chesapeake's activities in Michigan did not violate antitrust laws. This action has no merit and we will vigorously contest it."

Under pressure from a reconstituted Board, McClendon left Chesapeake in early 2013. He has since started a new oil and gas business, with offices just down the street, called American Energy Partners.

Chesapeake's new CEO, Doug Lawler, has praised McClendon for building a great company, but has also made it clear, through restructuring and reduced spending, that Chesapeake won't be doing business the way it was done in the past.