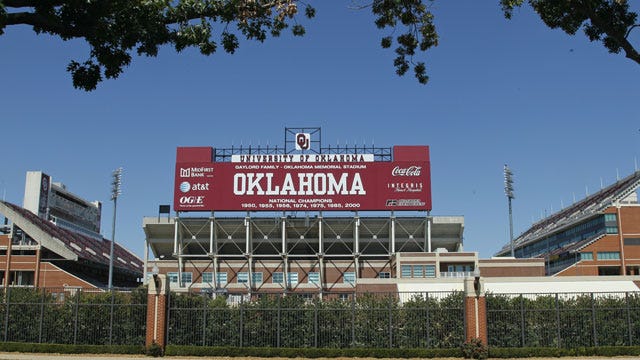 KWTV's Dean Blevins has confirmed through multiple sources that a Master Expansion Plan for Gaylord Family-Oklahoma Memorial Stadium has been approved and is expected to be announced at a future OU Board of Regents meeting.

The project would commence following the final home game of the 2014 season against Oklahoma State on Dec. 6, with work being basically done around the clock. One source said they hoped to have it completed for the 2015 home opener on Sept. 5 against Akron, but another said that was highly unlikely.

Sources put the cost of the Master Plan between $350 and $400 million dollars.

The most noticeable upgrade to the fans would be in the south end zone, where additional seats would form a bowl, and for seating to increase from its current capacity of 82,112 to close to 88,000.

But the Master Plan is about much more than adding new seats.

Current suites are expected to be upgraded with new suites made available in the south end zone area.

A new press box would also stretch the entire length of the west sideline.

Substantial facilities upgrades in the south end zone, where the players currently dress, meet and press conferences are held, would result in a state-of-the-art weight room and training facilities – a huge recruiting tool in today's environment.

This is the first extensive work done on the stadium in a decade.

There are 15,000 fans currently on the waiting list for season tickets. OU's sellout streak is currently at 92 games, beginning in 1999.

Here is an overview of upgrades made to the stadium over the years:

- Bud Wilkinson was dominant when in 1957, the capacity was 61,826 with south end zone bleachers.

- 1975, Barry Switzer was feeding the monster and capacity rose to 71,187 with the addition of the west upper deck.

Gaylord Family-Oklahoma Memorial Stadium ranks among the 15 largest on-campus facilities in the nation and, almost since its inception, the stadium has been a work in progress.

OU ranked No. 13 in average home attendance for the 2013 and 14 seasons at 84,800, operating at 103 percent capacity with a total home attendance of more than half a million for six home games.

The tradition of the program and the optimism about the future give university leaders the confidence that selling out a bigger stadium will not be a problem. No program has won more games than Oklahoma in the modern era and only Alabama and Oregon have won more than OU in the past six seasons.

The biggest emphasis for the University of Oklahoma is on player and fan amenities.  Also, OU is one of very few self-sustaining athletic departments in the United States.

It's expected OU will be the Big 12 favorite, a preseason Top 5 pick nationally and Sporting News recently picked OU to win next year's national title. No pressure on a coach, right?