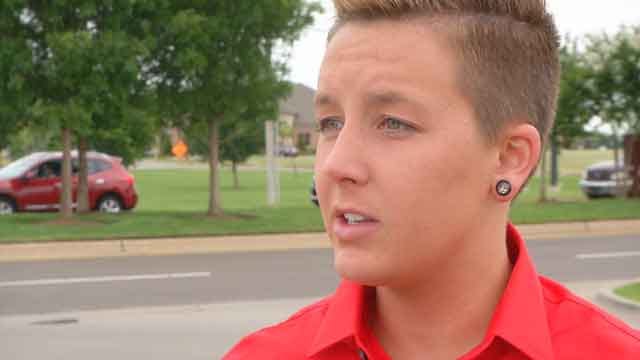 An Oklahoma City woman  is expelled from Southwestern Christian University after marrying a woman. Her union is in conflict with the university’s “lifestyle covenant”, which all students must sign.

The university tells News 9 it firmly stands behind its decision to expel Christian Minard.

Minard met with school officials Tuesday morning, but it wasn’t a meeting to appeal her dismissal. She wanted to express her displeasure in the way she was told to leave.

“Just because you are homosexual, you can still have faith in God. You can still be a member of these religious communities,” said Minard.

Minard is standing her ground, and admits, even though she agreed and signed the university's lifestyle covenant, she feels disrespected.

“The desire to play basketball and receive money for schooling kind of overtakes the, well maybe I’ll get caught, but there’s so many other kids on campus that are also doing this,” said Minard.

“Our handbook is very clear. Certain types of violations, our dean of students are empowered with the ability to issue an immediate dismissal,” said Wenyika.

Minard and her wife were married in New Mexico on March 17th, a state where same sex marriage is legal.

Minard said she got a letter from the university on July 3rd.

“I do kind of feel like I was used as an example,” said Minard.

The letter reads in short, "Due to this recent event, you will not be able to attend SCU in the future."

“And this applies to faculty, staff, administrators, and students. We wish her well. We have firmly held beliefs that govern our community,” said Wenyika.

Students can appeal their dismissals at SCU. Christian declined to appeal and is looking at other places to finish her senior year.