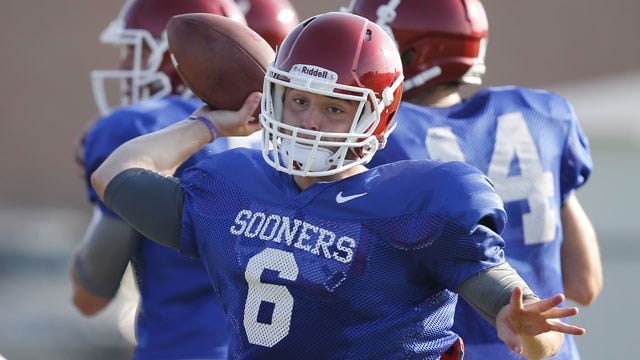 Baker Mayfield finally caught a break. And so did the Oklahoma Sooners.

The talented Texas Tech transfer won his appeal with the NCAA and has been granted a third year of eligibility. Oklahoma finally got good news after striking out with three other potential difference-makers they'd hoped/expected to play this season (Dorial Green-Beckham, Joe Mixon and Frank Shannon will not play this year for various off-the-field reasons).

There is some conversation about Mayfield redshirting this season and then having three years to play -- presumably leaving him at least one year with Knight having finished his career. But if Mayfield were eligible, it would be hard to fathom Oklahoma not pulling off the redshirt should Knight be unable to play.

Although Mayfield hasn't been taking reps with the ones and twos (he and DGB are tearing it up with the scout team), the Texas native is talented and experienced enough to jettison into the back-up role quickly. This doesn't mean that current back-up Cody Thomas will not have a successful career in Norman. Same with redshirt true freshman Justice Hansen. Both are gifted. But neither is currently what Mayfield is as a proven major conference passer, runner, leader and playmaker.

The NCAA should have given an answer sooner to Mayfield. And the Sooners should have done more to get the transfer rule appeal earlier. Sources confirm the Mayfields were disappointed with the timing of the process.

But that was nothing new for them. Red Raider coach Kliff Kingsbury came off looking bad throughout the process. His starting QB was not given a scholarship initially, then in the spring, and then blocked the transfer because it was within the Big 12. It can be argued that his delays led to it being too late for the Sooners to even be able to offer him a scholarship. You can bet big that Mayfield, who stunned observers when he chose a quarterback-laden Oklahoma, will eventually get his much-deserved scholarship the first chance Bob Stoops gets to extend the offer.

How good is Mayfield? Whether a tad of hyperbole were added or not, one very high-ranking source said not long ago that if Mayfield gains immediate eligibility "Josh has a tough decision to make."

Of course offensive coordinator Josh Heupel is not about to demote his latest star pupil in Trevor Knight. Knight possesses intangibles that are rare. He also has running back awareness and the ability to accelerate and pick up important yards with his feet. And Knight's passing is an improving work in progress — which considering Oklahoma has rolled to double-digit margins in each of its four wins and he's throwing to smallish receivers with limited experience, that's not too shabby.

But Mayfield is a plucky personality who takes that confident and fun-loving aura to the field. His passing at Tech in his seven starts was the major reason he was voted the Big 12 Offensive Newcomer of the Year in 2013. Mayfield has tremendous instincts, quick feet, and good decision-making that would allow him to succeed in the zone read offense.

The biggest reasons that this is such good news for OU is that all-of-a-sudden they have an insurance policy at the most important position on the field. Oklahoma's top three priorities have been to 1) protect the QB; 2) protect the QB; 3) protect the QB. While that will remain a paramount theme, the addition of Mayfield will give play-caller Heupel the ability to utilize the QB run game much more than what we've seen so far. Knight's only carry at West Virginia was the last-play kneel down.

If Mayfield is eligible this season and the governor were lifted from his QB run game play-calling, OU would be able to utilize the weapon that won Knight the job in the first place; his rare and innate ability as an option game running threat. Knight has developed into a solid passer. But there's not question his number one asset is his wheels and run-pass ability; not as a drop back passer as he was Saturday night in Morgantown for much of the evening.

With the emergence of RB Samaje Perine, the dominance of their massive offensive line, the continued development of receivers and the picture-perfect 4-0 start, Oklahoma just got the news it needed to stretch the field and stress opposing defenses to the max. Couple that with tremendous defense and the Sooners are in prime position to make a run at the national title.

Mayfield's addition would mean the Sooners now have two "gamers" at QB. Today's news turned a shaky situation into an invaluable strength. Because those in the ivory towers believe they've just doubled the number of QBs who can take them to the mountaintop.