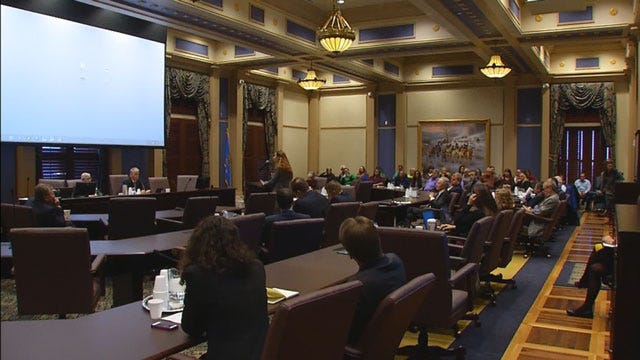 The Director of the Oklahoma Bureau of Narcotics said he would support a study that would allow parents to give non-intoxicating levels of cannabis oil (CBD oil) to their children. The announcement was made Monday at a legislative study.

The issue of legalizing CBD oil in Oklahoma seems to be gaining some momentum at the capitol. For one lawmaker who is working to get a law passed for this legislative session, it's personal.

Katie Dodson is 10 years old and has been suffering from seizures since she was just a baby. She has Dravet syndrome. Her parents have tried everything, even brain surgery, where doctors removed an orange-sized part of her brain.

“We have to sign off at the pharmacy that some of her medication causes liver damage and damage to organs and that can be terminal,” said her mother Kelli.

Katie is also the niece of Oklahoma Representative John Echols.

11/12/2014 Related Story: Oklahoma Families Move To Colorado To Get Medical Marijuana For Their Children

“If it's something that is going to help Katie, I'm going to fight for it,” said Rep. Echols.

Echols held the legislative study Monday where medical professionals testified about the benefits of CBD oil and parents pled with lawmakers to let them legally use it in Oklahoma. The hearing ended with testimony from OBN Director Darrell Weaver who threw his support to the cause.

“My position today of the Oklahoma Bureau of Narcotics is we support, we support the research and the trails of CBD oils at a low non-intoxicating .3% or less,” said Weaver.

Echols, who will author the bill, said he believes he can convince his colleagues at the capitol to do the same.

“There's no legitimate reason to be against this bill, it's non-intoxicating as the medical professionals said, there's no possibility of abuse,” said Rep. Echols.

Some parents, however, said they are pushing for legalization of an oil with a higher level of THC (the intoxicating part) saying both parts of the plant are needed. But Katie's parents said this bill is at least a beginning.

“It's potential, it's a step in the right direction,” said Jason Dodson.

There was a very similar study last year on legalizing CBD oil, but nothing ever came of it. No bill was even presented in the legislature.

Earlier this year, Governor Mary Fallin also said she would support a study of cannabis oil.