Yukon Family Fighting To Keep Dogs From Being Euthanized 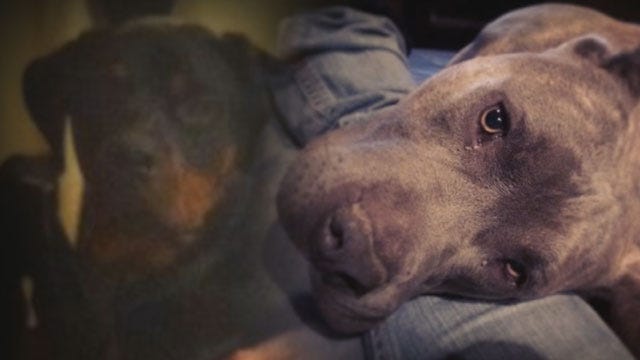 The lives of a family's rottweiler named 'Seiger' and their pit bull named 'Tito' hang in the balance in Yukon. Their owner said he is firing back at his neighbor and a Yukon municipal court judge who wants the dogs dead.

Dan Meier, who's an Air Force veteran, and his family lives in Yukon's Preston Park neighborhood. Meier said one of his neighbors told animal control back in late Oct. Dan's dogs attacked the neighbor's dog. The allegation was that Meier's dogs somehow pushed themselves through a small opening in a wooden picket fence that separates Meier's and his neighbor's backyards. The neighbor told animal control his dog was injured in the alleged attack, Meier and Yukon's police chief confirmed that neighbor has failed to provide a veterinarian bill or any kind of medical bill as proof Dan's dogs did anything.

Regardless, this past Tuesday, a Yukon municipal court judge ordered Dan Meier's dogs be destroyed. “We've been baffled,” Dan told News 9's Steve Shaw Friday afternoon as they stood in his backyard.

“I always thought the burden of proof had to be established in any kind of legal matter.”

“Would these dogs hurt a flea?” Shaw asked.

“No no never have,” he said. “They've been socialized with people, other dogs. Uh, there's never been an incident of aggression.”

Dan Meier's attorney Friday filed a temporary injunction in Canadian County District Court against the municipal judge's ruling. Meier said this legal fight will cost him thousands of dollars, and he fully intends to counter sue his neighbor for every last cent.

Yukon Family Fighting To Keep Dogs From Being Euthanized