Investigators Turn To The Public For Help In Anne Hill Case 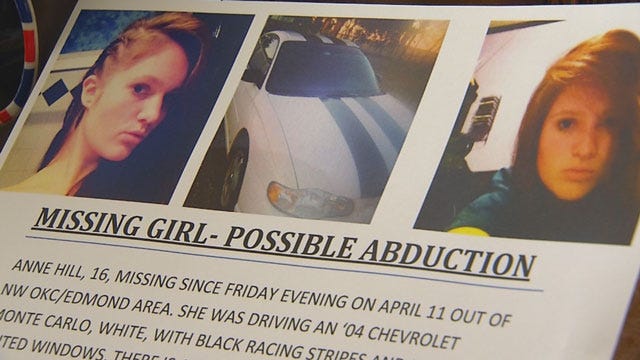 Private investigators said they are turning to the public for help in identifying an area where they believe and Oklahoma teen's body was left.

Anne Hill disappeared nine months ago. Investigators have searched for the Casady High School student near Edmond, but new clues have led them to other areas.

Sunday would have been her 17th birthday, but Anne Hill's family was not celebrating.

“We know we are looking for a field that is rural that has well sites on it,” private investigator Darcie Parton-Scoon said.

It was a vague description by Oklahoma standards, but it's one of a handful of clues private investigators have. They believe her body was left near the edge of a wooded area close to I-35 southbound or I-40 westbound and within three to five miles of the exit could be a natural or manmade rock formation.

Investigators have searched from Guthrie to Highway 9 as well as from Seminole all the way to Hydro. But so far, it's turned up nothing.

“It's just so frustrating to have to tell the family after every search, ‘No,'” Parton-Scoon said.

Meanwhile they asked for the public's help zeroing in on where Hill's body could be. They said they know it's near an oil pump or pump site in a large open field, is rural with wooded area in the perimeter, is within close proximity of a highway about five miles or less, has a white building of some type between the highway and well sites and could possibly be close to an exit with a natural or manmade rock formation.

“They need to know what happened that night,” Parton-Scoon said. “That's just something that every family with a missing person goes through. We work with tons of them, and they have to have that. There's no way they will ever be able to move on until that happens.”

One person was charged with first degree murder in this case after another suspect gave him up, but charges have been dropped against her. A court appearance was set for next month.

Investigators Turn To The Public For Help In Anne Hill Case