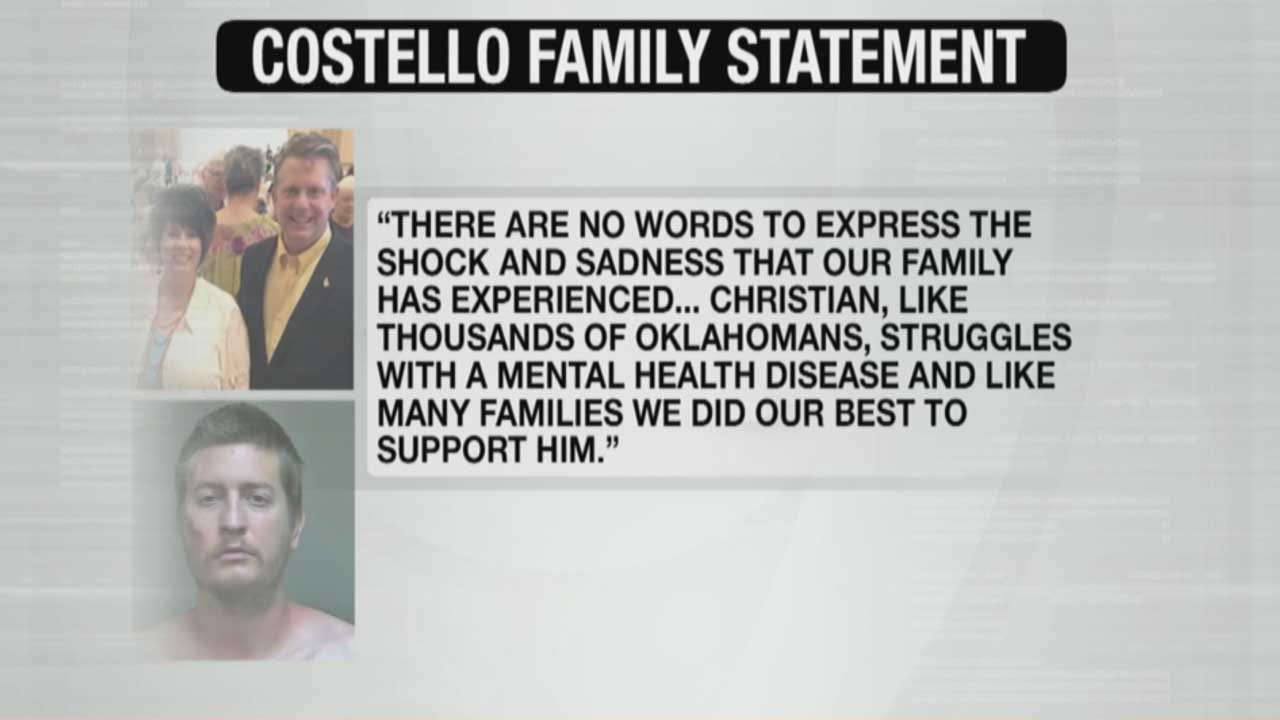 The family of a prominent state politician is mourning his death after his 26-year-old son is accused of killing him.

The family confirmed that mental illness played a major part in the homicide.

On Sunday, Labor Commissioner Mark Costello was brutally stabbed inside and outside the Braum's restaurant and store, 11224 N May Ave.

“We saw that happen in front of us,” said Patrick Spencer, one of several witnesses who saw the attack and called 911.

“There were several people in the parking lot who were trying to help. And they tied him up with belts and they were able to keep him under wraps until police got here,” Spencer said.

Witnesses said Mark Costello's wife also tried to separate Christian Costello from his father and get the commissioner into the family car, but she couldn't stop the fatal attack.

One of the witnesses bumped Christian Costello with his car to get him to stop assaulting his father, police said.

"There are no words to express the shock and sadness that our family has experienced the last number of hours. The outpouring of emotion and support our family feels is tremendous. Our son, Christian Costello, has experienced many difficulties over the past several years. Christian, like thousands of Oklahomans, struggles with a mental health disease and like many families we did our best to support him. Mark was committed to being there for his son and provided whatever help he could as a father. We ask for your prayers and support as our family tries to cope with and understand this life-changing tragedy.

Mark loved to brag about his kids and their successes, but like many in the public eye, he also viewed his family life as personal. We ask that you respect our family's privacy as we work through this very difficult time and please understand that our family will struggle with this for years to come as we try and find answers."

In a text, Cathy Costello confirmed her son was diagnosed with bipolar disorder with psychosis and schizophrenia. She also stated Mark Costello was always afraid that Christian Costello was going to kill him.

Mark Costello's oldest daughter posted a heartbreaking tribute to her father on her Facebook page saying in part, "Never going to be walked down the aisle by you … but most of all never will I be able to be held by my daddy again."

Those who knew and loved Commissioner Mark Costello have been coming by his campaign sign outside the Republican headquarters on Lincoln Blvd near NE 40 Street. and have been leaving behind flowers and other things for the family.

The Archdiocese of Oklahoma City said a Rosary for Mark Costello will be held at 6:30 p.m. Friday. A traditional Latin Mass is set for 10 a.m. Saturday. Both events will be held at the St. Monica Catholic Church, 2001 N Western Ave. in Edmond.

Christian Costello is being held in the Oklahoma County jail on a murder complaint. He has not been formally charged.

News 9 checked court records and discovered Christian Costello had several run-ins with the law throughout the years.

Court records show Christian Costello was arrested back in March 2012 after he drove through three road signs before crashing his car.

He was charged with assaulting a police officer and resisting arrest during that stop. He was also charged with a driving under the influence of drugs charge. He pleaded guilty and served 40 hours of community service.

Costello was seen exposing himself outside of St. Eugene Catholic School in The Village. A woman living nearby saw it and called police.

When officers arrived they discovered Costello wearing only pajama pants and one green shoe. They say was chewing on bird feathers, dandelions and weeds.

Costello was out on a $2,000 bond and set to have a court appearance on the misdemeanor charge this October.

The report states he told the officer he had a fight with his parents and he came out to his car to get away from them. The police report also states officers found five grams of marijuana in the car and state Christian Costello tested positive for marijuana.