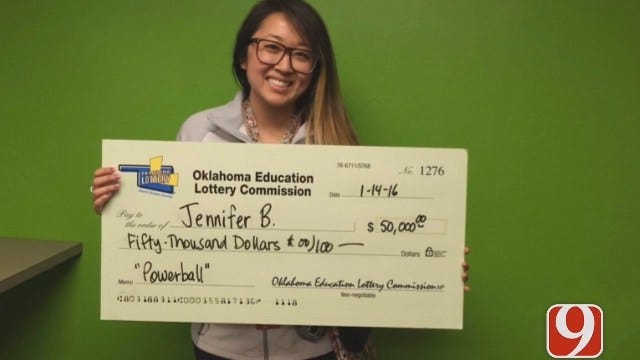 She didn't get the $1 billion but an Oklahoma woman did win big during last week's record Powerball drawing.

Jennifer Bui won $50,000 but it's what she's doing with it, that's truly impressive.

Bui is part owner of jiu-jitsu gym in Lawton, and works two other jobs.

Last week, she, like almost everyone else, took a chance to become a billionaire and bought a Powerball ticket.

“I saw the odds of winning, it was very, very low,” she laughed.

But this time, odds were in her favor.

Immediately, she knew what she wanted to do with it.

“I’ve always had my heart set to donate,” Bui said. “I always read about these charities and I always want to be able to help.”

And now, she can.

Bui is donating some of her winnings to the Lawton Humane Society.

Brown said they are currently struggling to help all the abandoned animals, many which require veterinary care.

“I don’t want to say we’re broke, but we are in the red and it’s medical expenses,” Brown said.

Bui, a veteran, is also donating to Mission 22, an organization that uses jiu-jitsu to end veteran and soldier suicide.

“Now, it’s time to do something to take care of the veterans and soldiers and give them a good, stable environment where they can call or come and talk and come train,” said Virgil Allen, who has benefited from the service.

Bui doesn't want News 9 to say exactly how much she's donating but it's a large portion of her winnings. She only wanted to share her story to encourage others to do the same.

“I’m hoping that I can inspire other people to go out and donate some of their time or some of their money if they can to these organizations,” she said.

Bui is also donating to the Bully Breed Humane Society.

Click here for more information about the Lawton Humane Society.