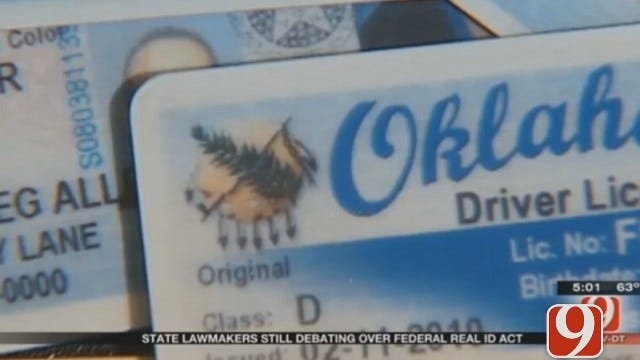 Your driver's license will be a hot topic for lawmakers as the state legislature meets next week.

Right now our state is not compliant with the federal REAL ID Act. That means after October, 2016, you can't even get on a commercial flight with your Oklahoma driver's license.

When the Oklahoma legislature meets on Monday, one of the bills the senate will consider is 1362, which offers two different types of Oklahoma driver licenses.

We've been following this story from the very beginning. A current Oklahoma driver's license does not comply with the Federal REAL ID Act, passed by Congress in 2005 to make it harder for terrorists to get fake IDs.

Oklahoma passed a law forbidding compliance with the act after some expressed concerns over personal information that would be released. Oklahoma has been given extensions to comply, but that extension runs out in October.

If you want to get onto a military base, or even board an airplane, your driver license won't make the cut.

Senate bill 1362 worked on by the governor and senate leadership would create two different types of driver's licenses, one that does not comply with the Federal REAL ID Act and another that does.

Anyone who wanted one that complies would submit the required paperwork and then go to a local tag agency.

Now if this doesn't become a law, getting on to an airplane would require a passport or another type of ID which complies with the federal law.