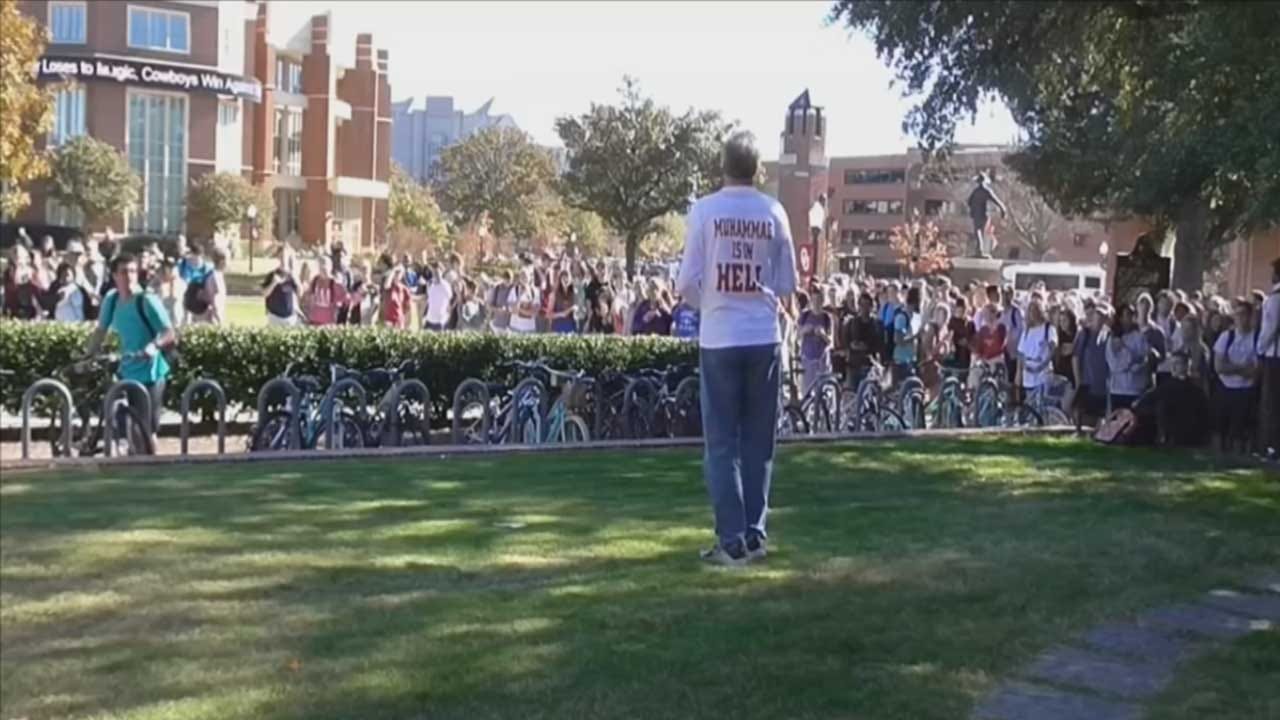 Gilles, who calls himself a pastor, although he has no affiliation to a specific church which News 9 could find, has been performing what he calls “open-air preaching” on campuses for nearly thirty years. He said he wasn’t expecting the kind of reaction from students he saw on Tuesday, despite performing on over 300 campuses.

“Not all sorority girls are whores! Just most of ‘em!” Gilles said at one point during his performance. Gilles posted videos, with the help of an associate, to YouTube of the incident at OU.

Eventually, he was asked to leave the lawn in front of a campus building to a sidewalk and hundreds of students both for and against Gilles, gathered around him.

“I condemn the hatred he's been spewing and this vision!” Boren said.

Gilles said he's not a racist and plans to sue OU for what he called a violation of his civil rights. Videos show him voluntarily leaving, escorted by police and apparent faculty blocking students from getting to Gilles.

“It's the only trick in their bag that they have that to call people they object to is racists, sexists, bigots, homophobes and xenophobes. It’s why Hillary Clinton lost,” Gilles said wearing a Donald Trump campaign button during his interview.

Gilles credited the recent presidential election for the increased intensity of his latest performance.

Critics of the President-elect have said his campaign ignited a movement from the Alt-right, a political movement with deep ties to white nationalism. When asked, he said he didn’t consider himself a member of the alt-right Gilles said he wasn’t affiliated with any singular movement.

In a statement, Boren echoed similar feelings about rhetoric heard in the nearly 600-day-long campaign fight.

“It is no secret that the recent divisive political campaign has unleashed strong emotions across the country. Some of the rhetoric has sought to turn Americans against each other along racial, religious and economic lines. Unfortunately, the national climate has spilled over onto campuses across the country,” he said.

This incident was the latest in a string of bigotry on campuses across the state. Last month, flyers from a white nationalist group, Identity Europa, were seen glued to campus buildings encouraging white students to “protect” their heritage and “make America great,” a play on Trump’s campaign slogan.

Last week, an OU student was punished, for posting a date and time online for a daily lynching with photos of mass lynchings and a racist image calling African-Americans, “mud men.”

In the end of Gilles’ performance, students at OU said it was time to fight back.

“At this time in America everybody knows, there's so much division. There's only one thing that can conquer so much hate, and that's f***ing love,” OU junior and redshirt running back Najee Bissoon said during the protest.