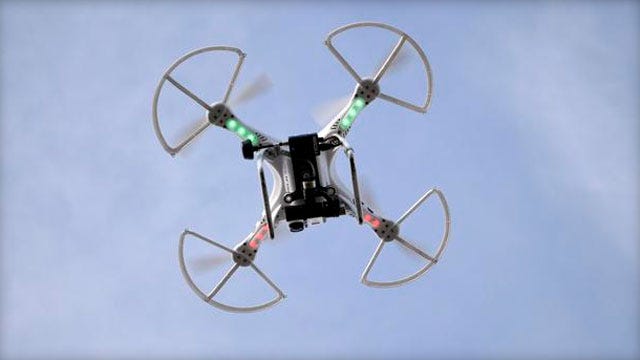 “It's becoming a pretty big issue, law enforcement are getting complaints all the time about drones flying over people's personal private property,” he said.

It’s for reasons like that, Shortey said makes drones, recreational or not, a security and privacy risk. Which is why he authored a bill currently on the State Senate floor; SB660.

“Citizens have a reasonable expectation of privacy and their privacy is being violated every day by these things,” Shortey said.

The law says anyone who owns property can damage or destroy a drone without being held civilly liable for the damage. As long the drone isn't in Federal Aviation Administration Airspace airspace or where a reasonable expectation of privacy exists. According to law that's within 400 feet of the property.

What's still unclear though is how someone is allowed to damage a drone. Shortey said it could range from shooting one down in a neighborhood or capturing one with a net. But according to the FAA, damaging or destroying a drone is a federal crime because drones are classified as aircraft.

“Once I read it I was just flabbergasted,” OKC Drones club president Don Price said. “I couldn't believe it that somebody would actually put together a bill like this.”

Don Price is an aerial photographer. He started OKC Drones about two years ago. The Facebook based group now boosts hundreds of members. He says the law doesn't make any sense, and that if passed, it could put people in harm's way.

“The safety issue's going to happen is when somebody shoots down a drone or they shoot at a drone and the bullet takes off across town and hits somebody else. That's where the real problems are,’ Price said.

The bill is still making its way through the Senate, leaving Price hoping it crashes and burns.

“There's got to be somebody in there, in politics they're saying hey you can't have this, it's a federal law to shoot down a drone,” he said.