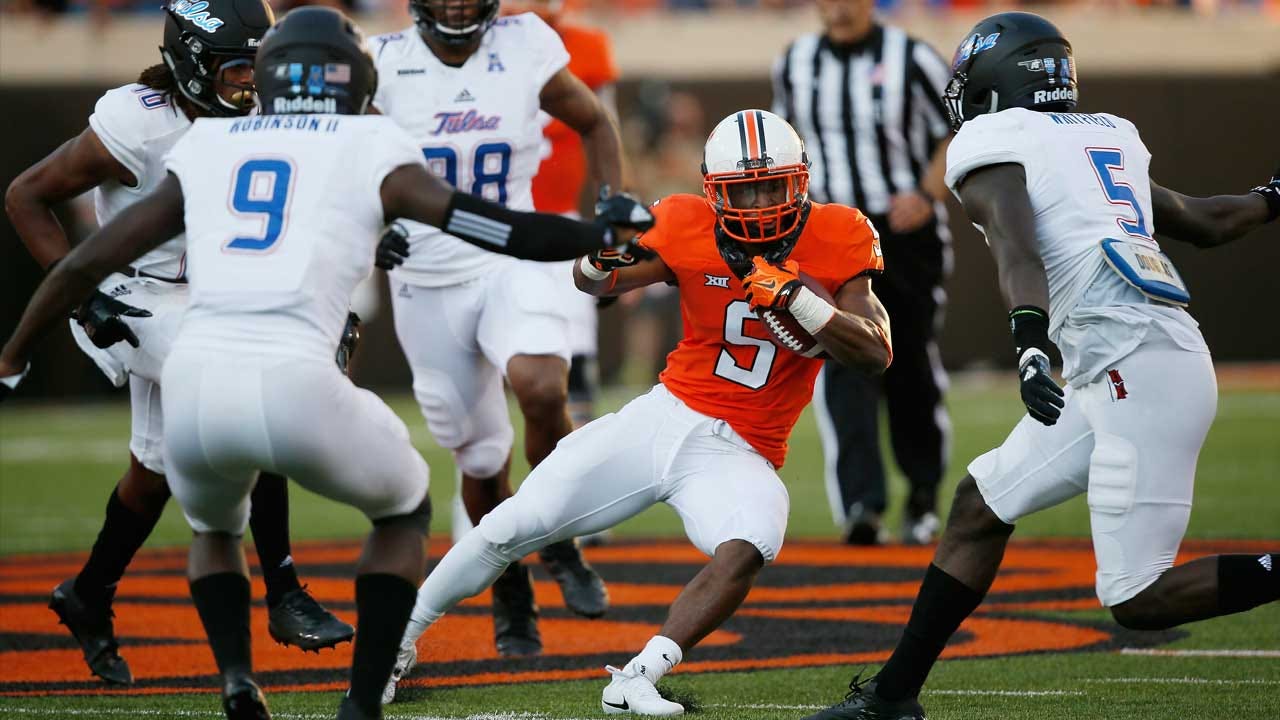 The Basics
The Oklahoma State football team travels to Mobile, Ala., to take on South Alabama at Ladd-Peebles Stadium on Friday, Sept. 8 at 7 p.m. on ESPN2. This is the first meeting between the two schools and it also marks OSU's first road game of the 2017 season.

On the Air
The game will be televised by ESPN2 with Adam Amin, Dusty Dvoracek and Molly McGrath on the call. The contest will also be carried live on the Cowboy Radio Network, with Dave Hunziker handling play-by-play, John Holcomb providing analysis and Robert Allen reporting from the sideline. Fans outside of the Cowboy Radio Network can listen to the OSU broadcast free of charge through TuneIn Radio or the TuneIn Radio app.

In the Rankings
Oklahoma State opened the season in the top 10 of the Associated Press Poll for the third time in the last nine years. The Cowboys entered 2017 at No. 10, just one spot behind their all-time preseason high of No. 9 in 2009 and 2011. Including this season, OSU has now reached the top 15 of the A.P. Poll at some point in nine of the past 10 seasons and the top 10 of the A.P. Poll in eight of the last 10 seasons. Although the week two rankings will be released Tuesday, Sept. 5, the game against South Alabama should mark the 85th time in the Cowboys' last 116 games that OSU has been ranked by the A.P. entering a game. The Cowboys were also ranked No. 11 in the preseason Amway Coaches Poll, matching their rank to close the 2016 season in that poll. Although the first College Football Playoff rankings of 2017 aren't released until October 31, it is worth noting that the Cowboys are one of only seven teams to be ranked in every set of CFP rankings since the beginning of 2015, joining Alabama, Clemson, Florida State, Michigan, Ohio State and Utah.

Oklahoma State From a Distance
After one game, much of the preseason attention directed at Oklahoma State seems to be warranted. The Cowboys were 59-24 winners over a Tulsa team that was receiving votes in both the Associated Press and the coaches polls. Mason Rudolph ranks among the national leaders in several statistical categories after throwing for 303 yards and three touchdowns on 20-for-24 passing with no interceptions. He also added a rushing touchdown. His performance was complemented by another standout performance from Biletnikoff favorite James Washington, who caught six passes for 145 yards and two touchdowns, and by a rushing attack that totaled 332 yards. That included a 132-yard night from sophomore Justice Hill and a pair of 90-plus yard outings from freshmen J.D. King and LD Brown. All told, the Cowboys hung 640 yards of offense on the Golden Hurricane and averaged 10.2 yards per play, which marked the second-best total in school history. The Pokes weren't bad on defense either, holding Tulsa 95 yards under its average from last season and forcing two turnovers, including a fumble that was returned 82-yards for a touchdown by linebacker Kenneth Edison-McGruder.

South Alabama From a Distance
As the only head coach in the history of South Alabama football, Joey Jones has played a key role in taking the Jaguars from a start-up program to multiple postseason bowls in less than a decade. USA has been bowl eligible three times in the past four years, including last season when it played in the 2016 NOVA Home Loans Arizona Bowl. That game was the cap of a historic season for USA football - one that included a 21-20 win at Mississippi State for its first-ever defeat of a Southeastern Conference opponent, and a 42-24 defeat of No. 19 San Diego State for its first ever victory over a nationally-ranked team. Now the Jaguars are trying to carry that momentum into the 2017 season. They opened the year on the road last week, facing Ole Miss in Oxford, Miss. The Jaguars fell, 47-27, but they did show promise in several areas. The Jaguars opening scoring drive of the season covered 95 yards in 19 plays and took 9:40 - the most snaps and time taken off the clock in school history on a scoring drive. USA quarterback Cole Garvin passed for 204 yards with a touchdown and no interceptions, and the Jaguars got 83 rushing yards on 12 carries from running back Tra Minter in his USA debut to lead all rushers in the game.

An Oklahoma State Win Would:
• Mark its sixth straight win over teams currently playing in the Sun Belt Conference, and improve its all-time record against those teams to 16-1.
• Make the Cowboys 1-0 all-time vs. South Alabama.
• Give the Cowboys wins in 10 of their last 12 true road games.
• Improve Mike Gundy's record in non-conference games to 43-11.
• Improve the Cowboys to 26-5 in their last 31 non-conference games.
• Give OSU wins in 10 of its last 11 games overall.
• Improve OSU to 54-6 in its last 60 games against unranked opponents, dating back to 2010.