Calls For Resignation And Concerns Over Retaliation At OU Rally 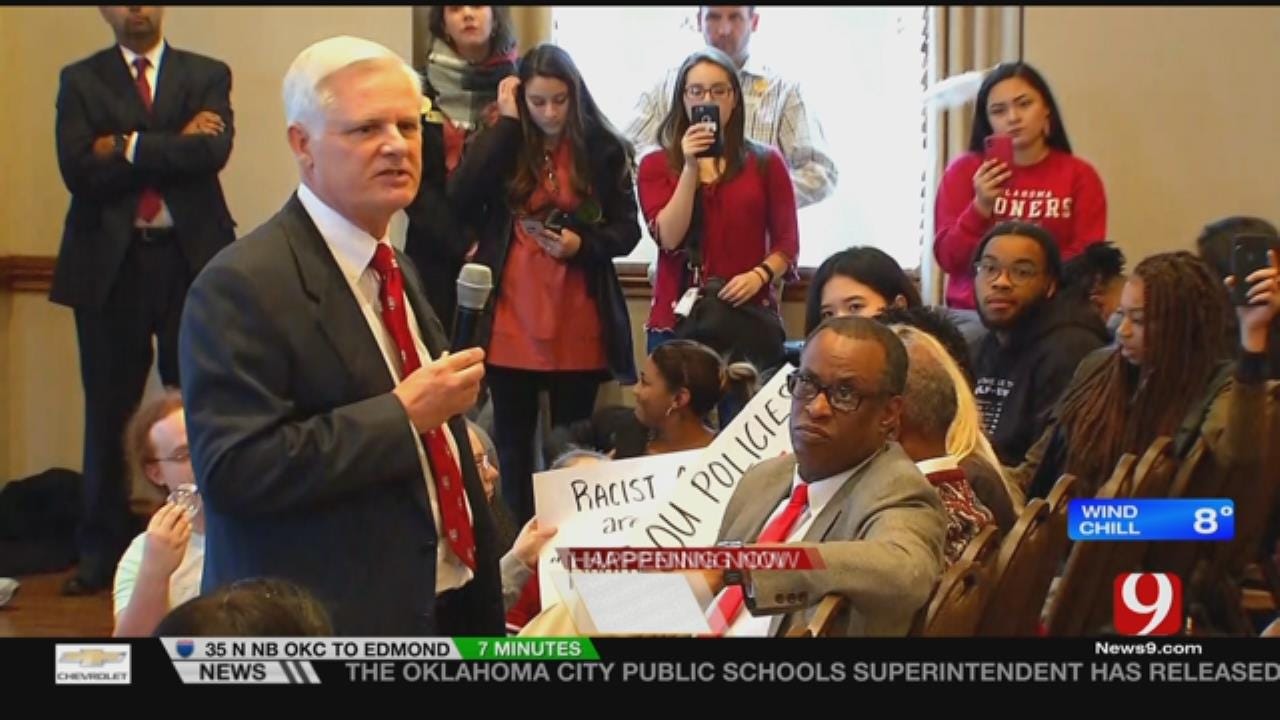 As tensions boiled over at a rally to stop racism at the University of Oklahoma, an explosive call for University President Jim Gallogly to resign is once again thrusting accusations of behind-the-scenes misdeeds to the forefront.

The rally was a part of the fifth day of outcry on campus after two OU students were seen in a racist Snapchat video. One of the students had painted her face black and used a racial slur.

The circulation of the video has sparked widespread outrage and calls for systemic changes at the university.

"I'm not going to be as kind as the people that came before me and say in a year from now we're going to ask for your resignation. I'm going to f****** ask for it now!” former Dean of International Studies and current professor Suzette Grillot said to Gallogly at the rally, holding a poster with the words “Resign now” in the president’s face. The students in the crowd erupted in cheers.

Gallogly was barely able to get a word in as students jeered during his responses to concerns.

“I've sat here in this chair and listened to people point at me, look at me, tell me things,” Gallogly said to the crowd of students. “Some of those things are my responsibility and I have a duty to lead our university to a better place. I am prepared to do that. I am here to do that, and I ask for your help to do that.”

So far Gallogly's time as president has been marred by suspicion from students and accusations from faculty.

Hired in June after a lengthy private sector career in the oil and gas industry, Gallogly promised to make cuts to departments and what he saw as wasteful spending at OU. Those cuts have been maligned by staff and students alike.

Grillot who was removed from her deanship on Jan. 18 wrote on Twitter in part, "I have been removed from my position in retaliation for being outspoken." Grillot said she had been vocal about her concerns with the Board of Regents’ hiring process of the new president.

She is the latest employee to say they were fired out of retaliation. The first was former University Vice President Jabar Shumate, in charge of campus diversity. Shumate’s position was created after the now infamous SAE fraternity racist video in 2015.

The University said Shumate was fired after repeatedly misusing his OU vehicle. He called his removal a "high -tech lynching."

Next, was Jess Eddy whose work to start an addiction prevention program at OU was halted. Eddy was a subordinate of Shumate. He talked to News9/Newson6 back in September.

“At this point in time, I believe the reason they canceled the program is to retaliate against me,” Eddy said.

All three faculty members making the accusations were considered loyal to former OU president David Boren, whom Gallogly reportedly threatened back in June over an Op-Ed in the local paper.

According to reports, Gallogly was angry over the opinion piece, saying "if [Boren] ever crosses me again, I will destroy him."

Gallgoly has maintained any firing or resignation while he's been president has been done as a part of planned cuts and not as a part of any vendetta. At a pair of appearances this week he vowed to address problems of racism on campus, review the university’s code of conduct and work to recruit more a more diverse staff and student body.