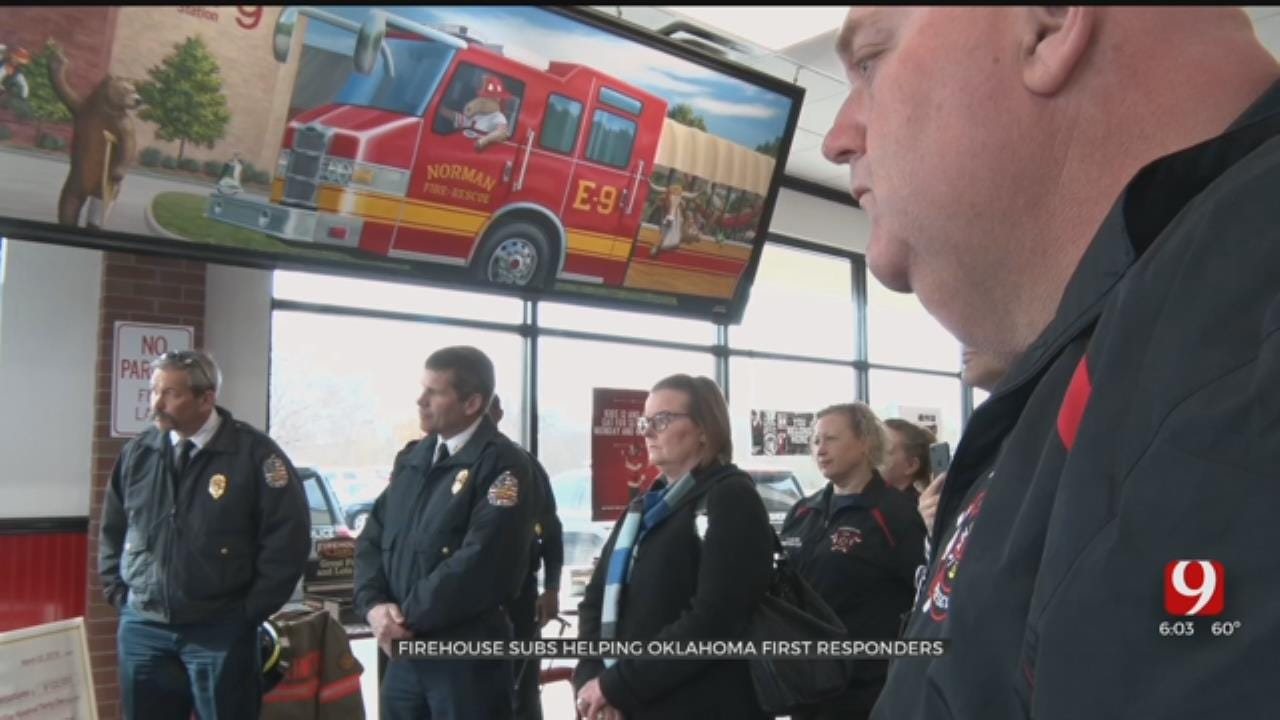 The Firehouse Subs chain is continuing its mission to give back to first responders, celebrating recent gifts totaling $122,531 for Oklahoma.

The six departments on the receiving end plan to save lives in a variety of ways.

One of the biggest awards went to the Edmond Fire Department for a Utility Task Vehicle, allowing them to respond to calls on the increasingly popular Arcadia Lake trails. With 20 miles of new trails along the lake and more in the works, Edmondites are enjoying the outdoors, but some are getting hurt and fire trucks cannot fit on the pathways.

“We can get to the scene, but we can’t get to the patient often, and our firefighters have to actually hike into those areas,” explained Fire Chief Chris Goodwin.

This will change thanks to the Firehouse Subs-donated UTV, complete with a stretcher to carry on the back.

The Woods County Sheriff's Office received a new ATV, and the toys do not end there.

A robot carrying a 360-degree camera has already been put to work for the Yukon Police Department. It helped police flush out a suspect who fled into the sewer system in January.

“Everybody was able to converge and apprehend him safely,” Major John Brown said.

Tuttle firefighters have been utilizing their gifts as well. Two automatic CPR machines that allow the volunteer team to work with less manpower on the 45-minute ride to the nearest hospital.

“Prior to these devices, we would take three to four people to the hospital,” said Battalion Chief Chris Kondos. “Now, the last one that I went with a crew on, there were just two of us in the back.”

The Tuttle crews have used the ROSC-U devices on 15 patients so far, and the difference is clear.

“Just seeing those decreased scene times is a huge increase for the patient outcome,” said Kondos.

As the weather warms up, Lexington Fire Department's volunteers are excited to suit up in 20 brand new wildland fire uniforms.

The Village Fire Department is upgrading its technology with a new thermal-imaging camera to help find hot spots.

These donations bring the Firehouse Subs Public Safety Foundations's contribution to Oklahoma to more than $700,000 since 2005, all thanks to customers who give change to make a change.

They can help yours, too. To learn more about the Firehouse Subs Public Safety Foundation, click here.