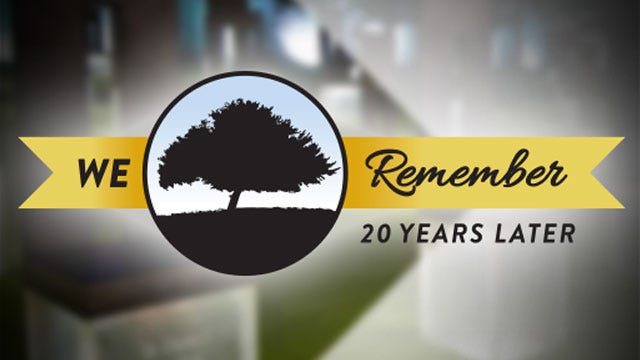 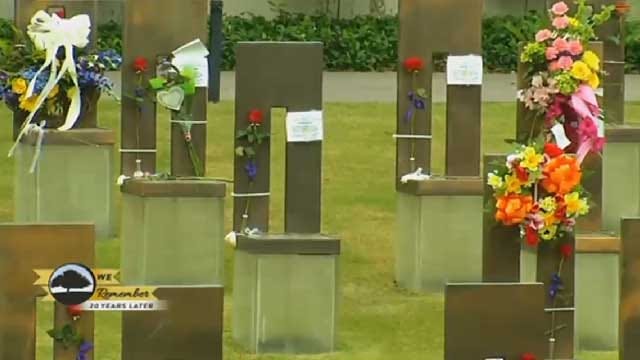 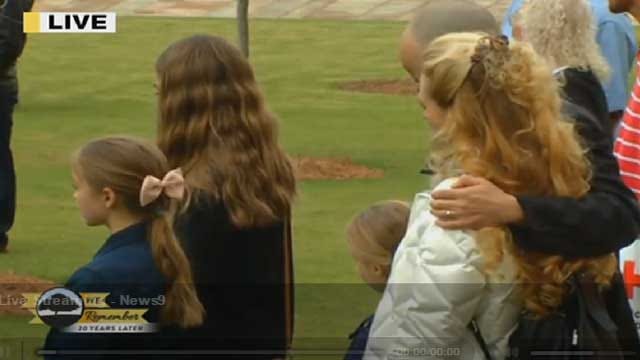 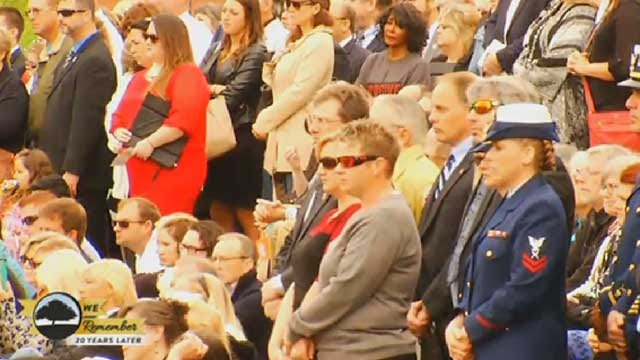 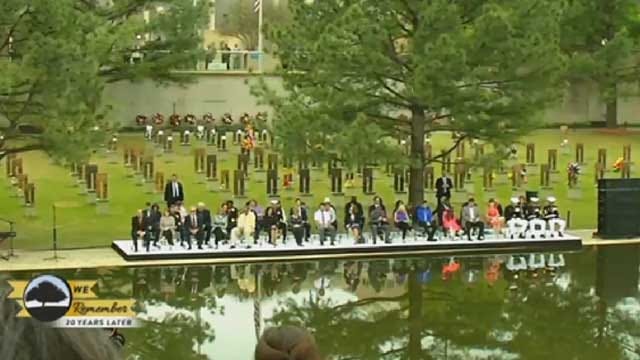 ?Sunday, April 19, 2015 marks the 20th anniversary of the Oklahoma City Bombing. The event remains the deadliest act of domestic terrorism in United States history. On that day in 1995, a massive explosion ripped through the north side of the Alfred P. Murrah Building in downtown Oklahoma City, killing 168 people, including 19 children. Officials estimate that almost 400,000 people in Oklahoma City knew someone who was killed or injured in the bombing.

Sunday's ceremony began with survivor Richard Williams and his two grandchildren reading the mission statement. Then Williams led the crowd into a moment of silence for 168 seconds, remembering each victim killed in the bombing.

At the end of former Governor of Oklahoma's speech he touched on the strength of the Oklahoma community and said that it was a "statement of faith and fellowship."

FBI Director James Comey said the the tragedy turned into a moment of history and that "It's not the moment that defines us. It's what comes next."

Former President Bill Clinton wanted to give his thanks to the Oklahoma community.

"A tragedy like this could have torn a city apart, but instead it has united this city... And that's an example to us all," said Clinton. "You had to choose far-sighted love over blind hatred."

"You have honored the memories of your loved one. You have reminded us we all should live by the #OKStandard - Service. Honor. Kindness."

The day began like any other beautiful spring day in Oklahoma. Then at 9:02 a.m., the blast took out a major portion of the building, which housed regional offices for several federal agencies, as well as a day care for employees.

Minutes later, News 9 began reporting the moments after the bombing from the air and on the ground as chaos erupted downtown.

Emergency crews from all over rushed to the scene of the explosion to try and save the victims.

About 90 minutes after the bomb went off, Timothy McVeigh was arrested during a traffic stop near Billings, Okla. OHP Trooper Charlie Hanger arrested McVeigh on firearms charges after pulling him over for driving without license plates. McVeigh was booked into jail.

Investigators released suspect sketches the next day as the rescue effort continued at the Murrah Building. Terry Nichols turned himself in after learning authorities were looking for him. He was held on a material witness warrant. McVeigh was then arrested in connection with the bombing, after being recognized as one of the suspects in the sketches. Then he was taken into federal custody.

Rescue efforts then turned into recovery efforts. And then on May 4, authorities ended the search for survivors. One rescue worker was killed and 85 others were injured trying to help save victims.

Terry Nichols was charged in connection to the bombing on May 10.

On May 23, the remaining part of the Murrah Building was imploded.

Four months after the bombing, McVeigh and Nichols were indicted by a federal grand jury on Murder and Conspiracy charges. Both would plead not guilty.

The case was eventually moved to Denver after defense attorneys argued media coverage of the bombing had tainted potential Oklahoma jurors.

More than two years after the bombing, McVeigh's trial began.

McVeigh was sentenced to death by lethal injection.

Nichols' trial began on Sept. 18, 1997. He was convicted of Conspiracy to Use a Weapon of Mass Destruction. He was also found guilty of eight counts of Involuntary Manslaughter in the deaths of eight federal employees. He was found not guilty of Destruction by Explosive. Nichols was sentenced to life in prison without parole.

In the years following the bombing, survivors, families, first responders and people from all over the world visited the memorial in Oklahoma City to honor the lives lost on April 19, 1995.

The event, now included in state history books, was a testament to the strength and generosity of Oklahomans. Efforts that day and the days after created what's now known as the Oklahoma Standard, #OKStandard.

Join us on Sunday, April 19, 2015 as “We Remember.” You can watch our coverage of the 20th anniversary ceremony on a special edition of News 9 This Morning, beginning at 5 a.m.

President Barack Obama released a statement on the 20th anniversary of the Oklahoma City bombing:

“Twenty years ago today in Oklahoma City, two terrorists attacked their own country, killing 168 people and injuring hundreds more. We will never forget the men and women who lost their lives in the bombing that day. The passing of time will never extinguish the pain we feel. But if those murderers hoped to terrorize the American people that day, to break our spirits or shatter the bonds that unite us, then they completely and utterly failed. We will be forever grateful to the first responders who risked their lives to save others, the law enforcement officers and prosecutors who brought the perpetrators to justice, and the ordinary men and women who set an ‘Oklahoma standard' for resilience that we still hold today.

It is with heavy hearts that Michelle and I send our condolences to the families of those we lost 20 years ago. And it is with great pride that we send our deepest gratitude to all those who have served as an example of America at its best.”

For a detailed look at the timeline of events since the bombing, a tribute to the victims and a word cloud representing emotions on that day, visit www.News9.com/weremember.    ?