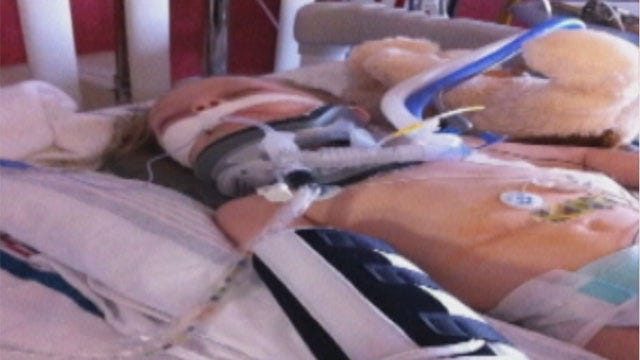 Braylee Hinkle is only 20 months old and has already endured more than most adults. A birth defect had the toddler in and out of hospitals for treatment, but this time both the family and doctors say her problems come at the hand of another.

If smiles are contagious then Braylee Hinkle infects her grandmother with just one look.

"She is an amazing child," Braylee's paternal grandmother, Sheila Thompson.

Thompson says in recent months the smiles have turned to tears.

"Her spine is fractured," Thompson wipes away as she explains the injuries to her granddaughter. "It tore the ligaments in her spine, it damaged her spinal cord."

Thompson says her one-year-old granddaughter sustained those injuries, leaving her legs paralyzed, plus two broken arms, broken ribs, and countless bruises while in the care of her mother, 18-year-old Kayla Pollock and Pollock's boyfriend.

"I could say we feel like the system has failed Braylee, and it has, and I mean it has or she would not be where she is at right now," Thompson said.

Now, hospitalized with only a 1% chance of ever walking, Thompson says the paralyzing injuries could have been prevented.

Thompson explains, she and her son Tyler Hinkle, Braylee's father, began noticing bruises on Braylee's face, legs, and bottom when they picked her up for visitation.  Doctors documented the possible abuse and turned its finding over to DHS.

"I don't want my grandbaby to go back to that house ever," Thompson explains, "because her mother is not going to protect her obviously, because she is not."

Despite the allegations against Pollock, Thompson says a Dewey County Judge repeatedly placed Braylee back in her mother's care.

"The judge said, ‘I have known that girl since she was born and I have watched her grow up,'" said Thompson.

Thompson says while her granddaughter survived the latest injures, she's worried next time Braylee may not,

"She is a fighter. I mean she is and there are so many people praying for her," said Thompson.

Thompson says Braylee is currently safe in DHS custody. The paternal grandparents are working to get temporary custody.  As for DHS, the judge, and the district attorney, laws prevent them from commenting on child cases.

News 9 made attempts to contact Pollock's attorney, but were unsuccessful. Investigators will not say if they are also investigating Pollock's boyfriend.