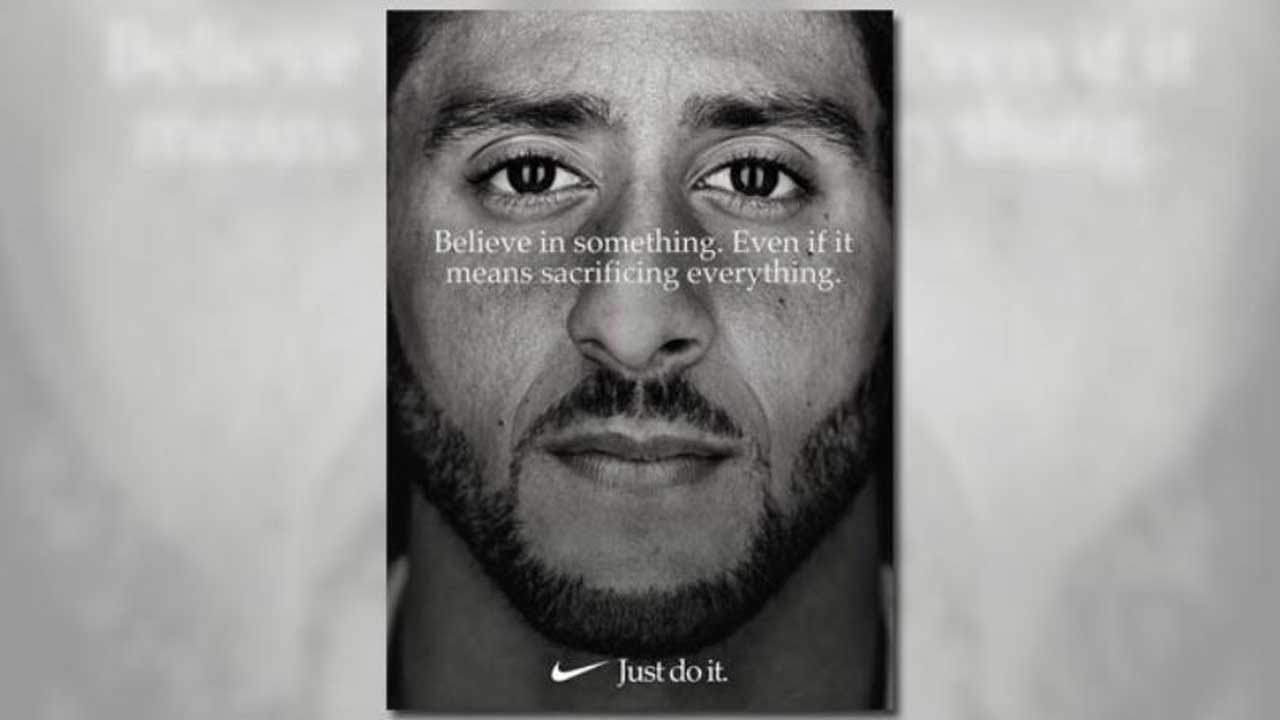 Most advertisers try to avoid controversy, but Nike welcomes it. Look no further than the sporting goods giant's decision to feature former NFL quarterback Colin Kaepernick in the 30th anniversary version of its "Just Do It" ad campaign. The company seems unconcerned that the move is angering some consumers so much that they're posting videos of themselves on social media torching Nike merchandise and caused its stock price to fall on Tuesday.

No matter. The largest maker of athletic apparel will feature the now-teamless football player in both TV and online ads -- whose tagline is "Believe in something, even if it means sacrificing everything" -- and will create an apparel line for him. It will also contribute to Kaepernick's charity, Know Your Rights.

Nike first partnered with the 30-year-old Kaepernick in 2011 and stood by him when he attracted heated criticism for kneeling during the national anthem to protest police shootings of unarmed African Americans. Many other players followed Kaepernick's lead. But President Donald Trump and his allies denounced the player protests as un-American and called for teams to fire any participants.

Kaepernick opted out of his contract in 2017 when it appeared the San Francisco 49ers would cut him during the off-season. He subsequently sued the National Football League, alleging that team owners are colluding to prevent him from signing with another organization. An arbitrator ruled last week that Kaepernick's case can proceed to trial.

"They are aligned with their athletes and always supported their athletes … in a very authentic way," said Joe Flores, executive vice president and co-head of sports and entertainment at MWWPR. "It wasn't forced. Colin Kaepernick's stance on this has been steadfast throughout the entire process. It's not about picking one side or another. It's really about applauding what Mr. Kaepernick had to give up to make his point."

Other marketers noted approvingly that the campaign has made a big splash and set Nike apart. And they said it could solidify Nike's bond with athletes, especially black ones, an important consideration for a company that relies heavily on sports stars to endorse its products.

Brian Gordon, CEO of Engine Shop, a sports and entertainment marketing agency, said the ad is provocative but "authentic to who they are and the communities they represent and speak to," including the athletes. "Even in the face of potential backlash, they support their athlete partners, and that's an incredibly powerful statement to the athlete community," Gordon said.

"What you stand for is almost as important as what you make," BrandSimple marketing consultant Allen Adamson said. "It's a polarized marketplace. No matter what you do, you offend some people." Nike is focused on what it stands for, he added, "and if that upsets some users, so be it."

Robert Passikoff, founder of marketing consultancy Brand Keys, said an ad like Nike's will divide people, but the outrage won't last. "My guess is that the audience that is reacting so badly to this aren't buying a lot of Nikes anyway," he said. "They'll move on to the next thing. Welcome to the 21st century."

Nike noted that Kaepernick will be one of many athletes in the "Just Do It" campaign, which is "a compilation of the most inspirational athletes around sport -- athletes who have chased crazy dreams, no matter the obstacle or outcome," a company spokeswoman told the The Wall Street Journal.

Earlier this year, Dick's Sporting Goods decided to quit selling assault-style weapons and high-capacity ammunition magazines in the wake of the massacre at Parkland High School in Florida. The sporting goods retailer also restricted gun sales to consumers aged 21 and older. Apple has also taken positions on hot-button issues such as immigration and climate change.

"Controversy is increasingly becoming the cost of doing business for brands," said Mike May, vice president of business strategy for Huge, a digital marketing and advertising agency. "What we have seen over the past couple of years is that customers across a range of industries are increasingly choosing the brands they want to engage with based on value systems that match their own."

Nike has a "world-class marketing organization" and understood that its campaign would anger some customers while connecting with many more, according to May.

"It's seductive for brands all of a sudden to be at the center of a conversation of 20 million or 50 million or 100 million people," he said, "when previously you were paying millions of dollars to reach a fraction of that."