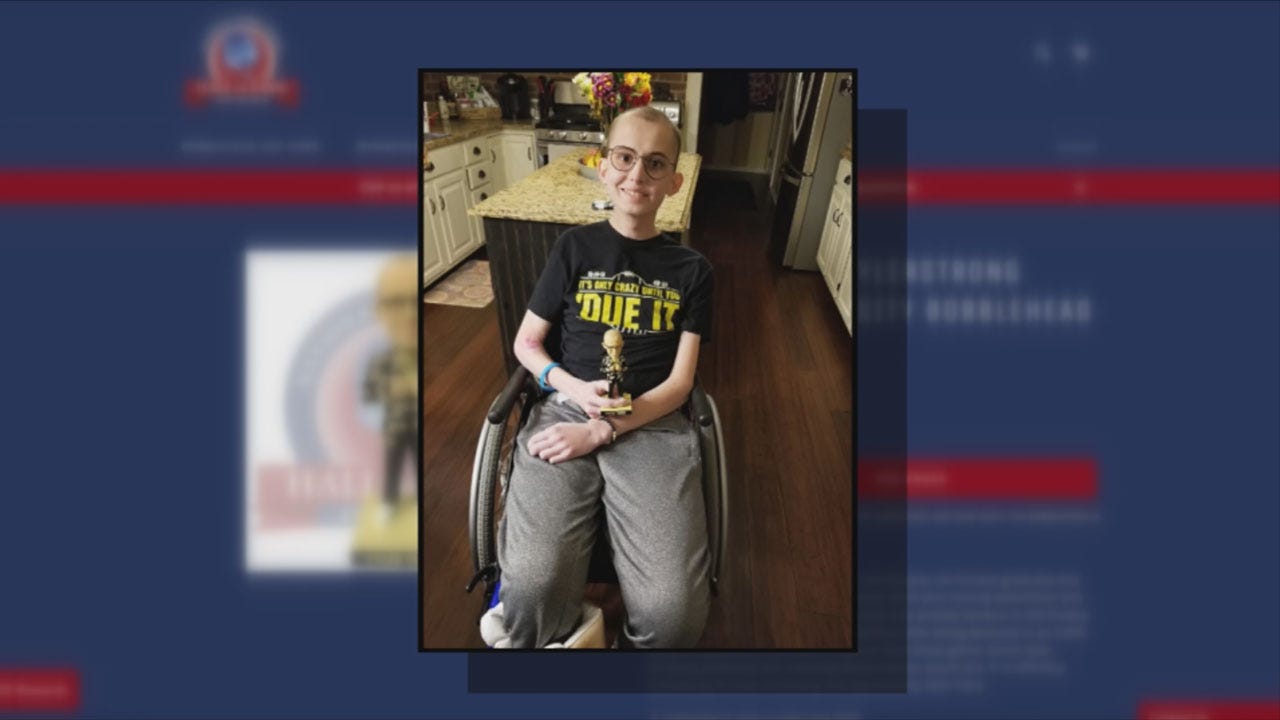 For Wes Jameson, his love of the Chicago Cubs is probably only matched by his love of bobble heads.

"I just went to a Cubs game one time, got a bobble head and after that I was just kind of hooked,” he said.

He’s collected the dolls with the oversized wobbling noggins for five years now. One hundred of them grace the blue shelves of his son's playroom in Yukon, all attached with a special memory.

And while his collection primarily rallies around his beloved Cubbies, he recently embraced another team, the Purdue Boilermakers. Not the team per say, but the team’s superfan Tyler Trent.

“Something pulled at me that I needed to help,” Jameson said.

Tyler has a rare form of bone cancer. ESPN highlighted the former Purdue student on its College GameDay special in October when Tyler’s team pulled off the unthinkable upset over Ohio State.

“I think that's when the world got introduced to him,” said Jameson. “It was really touching, kind of emotional. I felt like I needed a way to help. For whatever reason, I thought of bobble heads.”

So, Wes set out to make it happen by first contacting the National Bobble Head Hall of Fame, then Tyler’s family and Purdue University.

And not long after, the Tyler Trent, #TylerStrong bobble head was born. Tyler received one of the first ones made.

“He really was floored when he saw it and couldn't imagine or believe that first and foremost that somebody would want to buy a bobble head of him and secondly that someone would think there would be a value in having it,” said Tony Trent, Tyler’s father.

But that’s exactly what happened. People drawn to his story were buying the bobble head. In fact, 1,500 have already been pre-sold.

And it showed, at the College Football Awards show, when he received the 2018 Disney Spirit Award.

“He was in the room with the nation's most elite college athletes,” Trent said. “Both of the Oklahoma coaches have gone out of their way to tell Tyler they love his story. As a father there is nothing that pleases my heart more than to know that his life made such a big difference in people's lives.”

The bobble head can be purchased here.

The cost is $30 with a portion of the money going to the Jimmy V Foundation and the Tyler Trent Cancer Endowment at Purdue, which is being matched dollar for dollar.

Tyler hope to raise $1 million dollars for pediatric cancer research through sales of the bobble head and his autobiography, “The Upset,” available now for pre-order here.