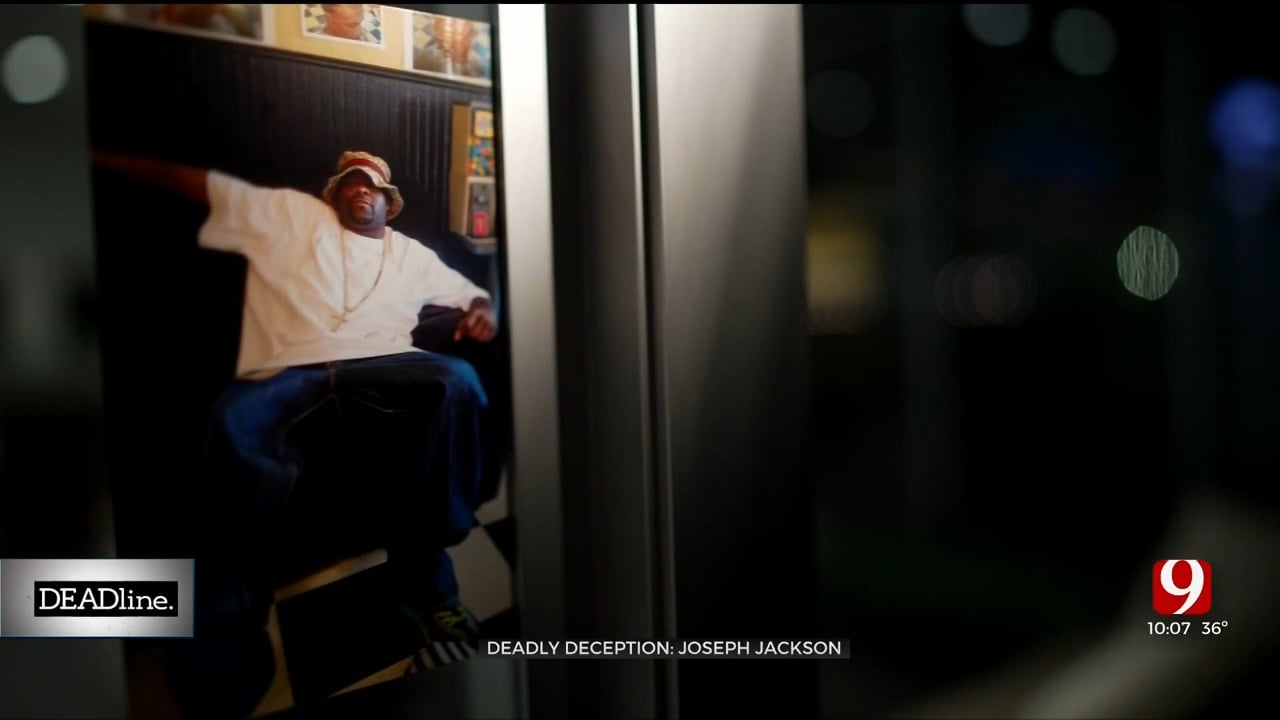 Six years ago, a neighbor found Oklahoma City metro barber Joseph Jackson, 42, dead in the garage of his townhouse. Investigators say it appeared Jackson opened the door to his killer.

Jackson’s case is the latest investigation in our cold case series called DEADline.

In the early hours of May 24, 2016, gunshots echoed throughout the Rockwell Gardens Complex near Northwest 13th Street and Rockwell Avenue.

Like several neighbors in the complex, she didn’t witness the crime.

Jackson was shot multiple times in the garage of his townhouse around 1 a.m., and then left for dead.

"It hurts how he died in that garage, in the dark by himself, by himself," said Shonyae Jackson.

Shonyae Jackson says her brother lived alone in Oklahoma City -- hundreds of miles from her and the rest of his family in their hometown Monroe, Louisiana.

Nearly five hours passed before anyone reported something being wrong.

"The neighbor at the time came home from work, (saw) the door standing open. She stepped just inside the garage and saw Jackson was lying on the floor," said Oklahoma City Police Department Lt. Mike Brenton.

The neighbor immediately called 911 to report the crime to the OCPD. Dispatchers took the call just before 6 a.m.

Lt. Brenton was one of two homicide detectives called to the scene to investigate.

"Everything we had suggested -- the struggle started somewhere right inside the door and then he retreated back toward the house," he said.

Crime scene investigators dusted for fingerprints on anything that could've been touched by the killer.

To better understand what was found and what could still be missing, we asked to review the case file.

"This is the door that the killer would have gone through to go into Mr. Jackson's garage," Brenton said, describing the scene depicted in photographs that the OCPD captured as evidence.

Investigators were unable to lift prints off the door handle. And a closer look revealed no sign of forced entry, suggesting Jackson most likely opened the door to someone he knew.

"Mr. Jackson didn't have an easy way to escape," Brenton said of the narrow walkway through the garage to the townhouse.

If he was ambushed, did the killer inadvertently leave DNA behind during the ensuing struggle?

An empty soda bottle found near the body gave police some hope in the form of fingerprints and a DNA profile. Forensic testing excluded the victim. Investigators uploaded the DNA profile and fingerprints to national databases in 2016, but there was no match.

"I’m having that DNA profile re-run," Brenton said. He submitted the samples again in late 2022.

If Jackson’s killer has been arrested since the initial test, reexamining the DNA could produce a match now.

"Those five shell casings were all submitted to our ballistics lab and (were) found to have been fired from the same gun, which tells me there was likely just one shooter," explained Brenton.

It didn't, however, rule out the possibility of more than one suspect.

The evidence also suggests Jackson’s killer never went inside. The house wasn't ransacked, and nothing appeared to be missing. Why then would someone want to kill Jackson?

"To be honest, I really don't know. At first, I thought it was jealousy," Shonyae said.

She’s been trying to find that answer for years now.

"He was self-made. My brother had money all the time," she added.

Shonyae says some people had it out for Jackson because of his financial success. Jackson ran a cash-only operation at his Louisiana-based barber shop. He was robbed numerous times and shot once. Jackson also had his own run-ins with the law, mostly for drug crimes.

"Maybe it was something he was into? I don't know. But I do know whatever it was didn't justify my brother's life being taken," she said.

Another possibility: Shonyae says her brother was accused of snitching in a drug case just before he moved to Oklahoma. She wonders if Joe's past somehow caught up with him.

Or did it have to do with a more recent business deal?

He’d become well-known for his cuts. He also had a side hustle at the shop, bootlegged shoes and purses.

We tracked down a close friend for more on his illegal trade.

"We bought those purses and ended up hooking up with a guy. He never spoke of a name,” Jackson associate Eyon Lewis said. Lewis couldn’t give us specifics but said whatever deal Jackson made with that unknown man in 2013 apparently unnerved him.

"He said if anything ever happens to me, you need to -- and then he made sure I knew who his contacts were," she explained.

Not long after the deal, the Department of Homeland Security raided Jackson’s shop, seizing hundreds of counterfeit shoes, handbags, and clothing. He avoided prison but couldn't dodge his debt for the seized goods.

Within 48 hours of that encounter, Joe was dead. Was his murder payback? The timing suggests it could have been, but an even stronger case can be made for Joe's murder being a botched robbery.

"It was a lick, just supposed to be a lick. He told me there was some big money in there," an unnamed informant told police.

In the jailhouse interview, the informant provided investigators with a detailed account of Joe's murder including names of those involved in the murder. To protect the integrity of the case, we've hidden the inmate’s identity.

"The dude came out through the townhouse and hits him in the head with a pistol. They wrestled and he shoots, 'boom, boom, boom,'” the informant explained. "Dude tried to reach for it, I guess his gun, or whatever he had, and he shot him again. Emptied the clip on him and took off running," he said.

The informant claimed the suspects, one of them seeking revenge over a woman, concocted the plan to rob Jackson by texting him and pretending to be someone else.

"He's parked outside. He's calling off a government phone...so the phone wouldn't track them," the informant said.

"We have evidence that Mr. Jackson thought he was expecting a woman coming over to his residence," Brenton said.

According to the texts, Jackson had apparently caught on to the ruse. Cell phone records show, just before 1 a.m., there was an incoming call that lasted several minutes. Then nothing.

Police found who the other phone was registered to and say evidence suggested someone else was using the phone. They began questioning Jackson’s personal contacts and close business associates.

Brenton: “Tell me what you know about Joe."

Giles: "Joe was cool...he sold weed out the barber shop, too."

Dustin Giles told investigators that Joe cut his hair. They had some mutual friends, but he didn't know much about Jackson’s life outside of work.

Giles: "I mean, he knew everybody. I know he came in contact with girls I mess with on Facebook."

We wanted to follow up and went to Giles's home, but he wasn't there. So, we spoke by phone.

Giles: "I don't understand why I'm still getting a call today for it."

Lisa Monahan, News 9: "You didn't have anything to do with his murder?"

Still searching, police looked into the jealousy motive by questioning the many women in Jackson’s life.

We are not revealing the identities of the women to ensure their safety.

Detective: "How do you know Joe?"

Female Witness 1: "We just talked on Facebook and on the phone, but we never actually hung out."

Female Witness 2: "I went to his house about three times. One of the nights that I stayed over there, somebody had come over there for some weed, and he sold it to him."

It was apparently no secret Jackson kept drugs and cash in his house. Investigators believe it's what got him killed.

"I have a very good idea who did it," Brenton said.

Brenton says they just don't have enough evidence to present charges to the District Attorney, at least not yet. They need more people to come forward to help Joe Jackson and his family finally get justice.

"That’s all we want somebody to do is just care about our family," cried Shonyae Jackson.

The Jackson Family said now is the time to come forward and help resolve this case.