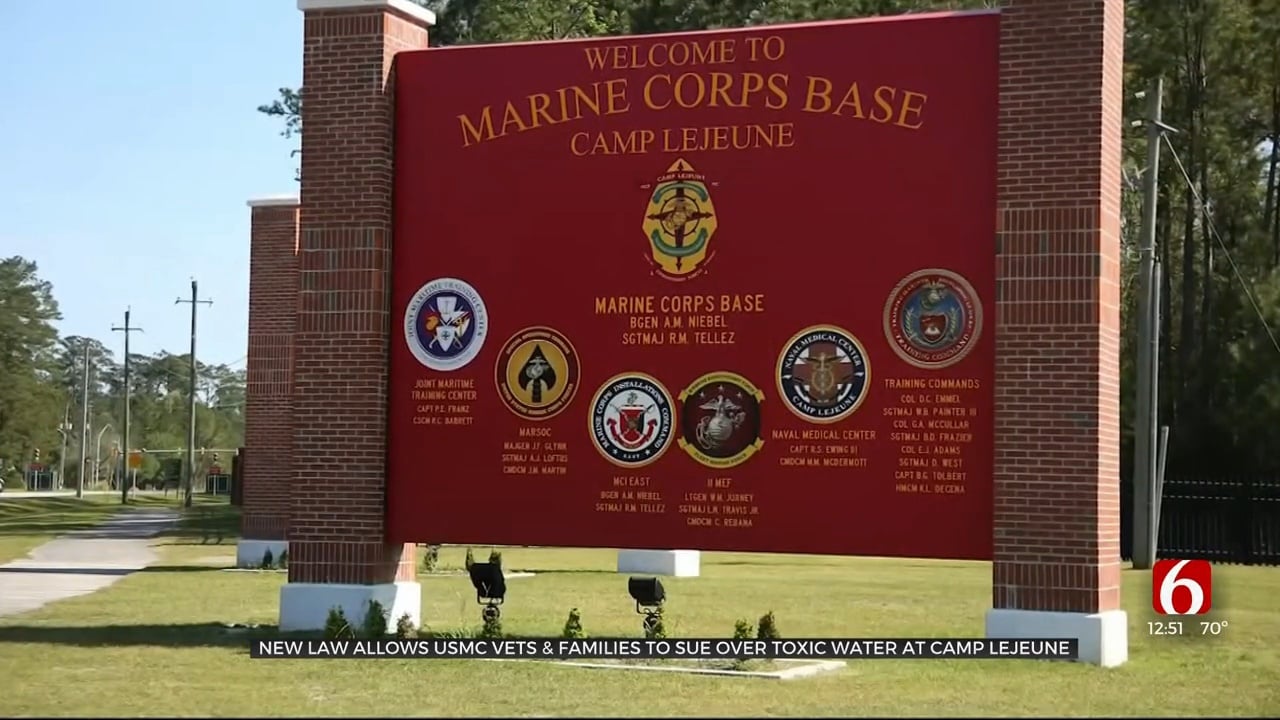 A new law may allow as many as a million people, mostly Marines and their families, to sue the U.S. government over contaminated water at Camp Lejeune, a Marine Corps base in North Carolina. The law is a major change for veterans and others who say they suffered illnesses as a result of their service at the base.

According to the Navy, 14,000 claims have already been filed after the Camp Lejeune Justice Act was folded into legislation in August that expands V.A. coverage for toxic exposure illnesses, and opens the courthouse doors for Camp Lejeune families.

The U.S. government has acknowledged that from 1953 to 1987 nearly a million veterans and civilians were potentially exposed to dangerous chemicals in Camp Lejeune's drinking water. In some areas, levels were 400 times what safety standards allow.

"Nobody told us anything about chemicals," said Bruno Teixeira, who worked in the base's mess hall for three months in 1986. "But we did notice that the water did have a strange taste and smell."

Texeira was 19 years old when he was at the base and said he worked with the camp's water every day for eight or nine hours. The father of two said he is not a smoker or a drinker, but he suffered a severe stroke in 2015. His doctor blamed the toxic water.

"We were serving as Marines. We were taking care of others, but we expected our own people to take care of us," he told CBS News.

According to the Department of Veterans Affairs internal watchdog, approximately one third of recent disability claims for Camp Lejeune veterans were mishandled or wrongly denied. The department turned down Texeira's disability claim — saying it "did not find ... he had maximum exposure."

Texeira said his disability claim was denied after a "Subject Matter Expert" at the V.A. hired to review his medical files never spoke to him or examined him.

Sen. Cory Booker from Texeira's home state of New Jersey got involved in Texeira's case, saying, "This one really breaks your heart."

"In many ways, they've been poisoned as a result of their service, and yet they were denied," Booker said.

He said a CBS News investigation that revealed stillbirths, rare childhood cancers and other illnesses among Camp Lejeune veterans has had an impact.

"You have expanded people's empathy and helped to add fuel to the demand that Congress do something about these injustices," Booker said.

In August, the Camp Lejeune Justice Act was folded into major legislation that expands VA coverage for toxic exposure illnesses.

Veterans who are suing say it is about acknowledging they were harmed by toxic water and getting accountability from the Navy and Marine Corps. The claims are shaping up to be one of the largest mass litigations in U.S. history.

The spokesman would not comment on the size of potential awards, saying it was an "ongoing legal matter."

As for Texeira, he has no hesitation about his service.

"I loved being in the Marines," he said. "I would do it all over again, cutting out Camp Lejeune, though. I wouldn't set foot in that base."