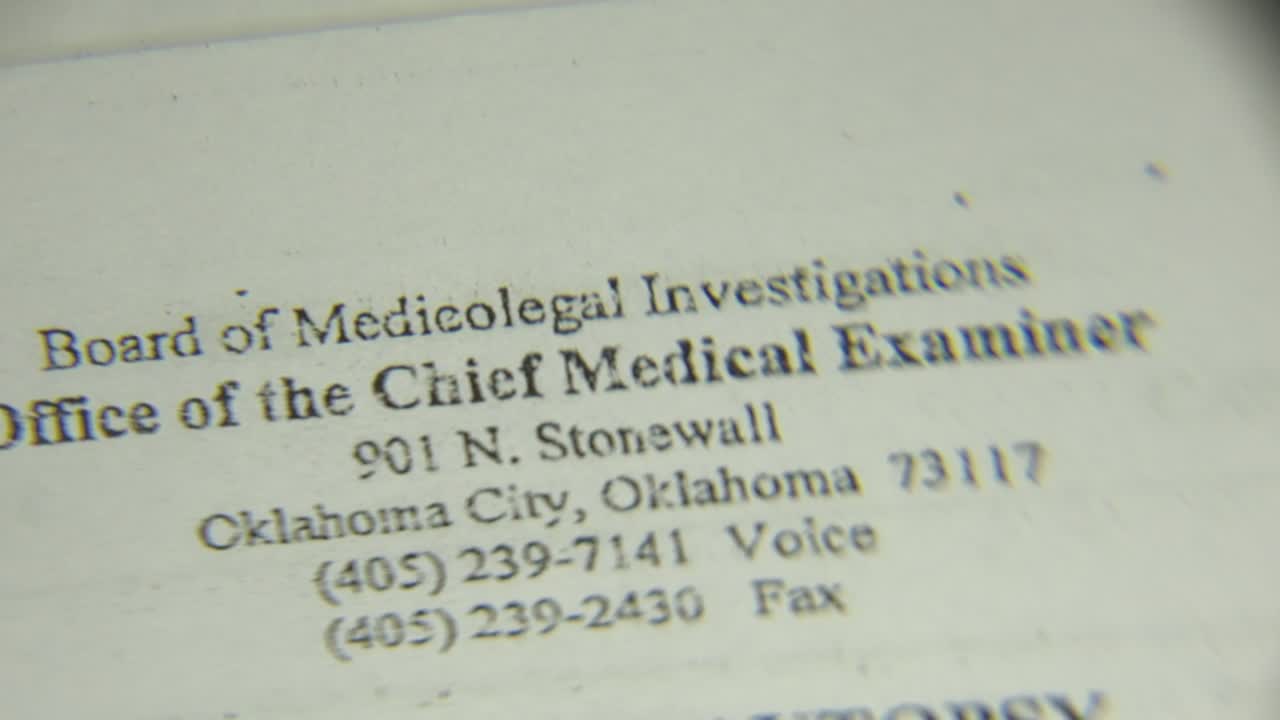 A Maysville, Okla., woman found dead inside a burned-out home nearly 19 years ago. Investigators say her death was no accident; Sheila Deviney was murdered.

News 9's licensed investigator Lisa Monahan is looking into who her killer might be, and why? Sheila's case is the next investigation in our cold case series called DEADline.

"They knew Sheila was in there somewhere," Coslett said.

The fire at Deviney's home sent a chill down her mother's spine to rival that morning's record cold.

"It was 8 degrees out. I didn't even know it. I couldn't feel anything," said Susan Deviney.

Susan Deviney couldn't see anything either. Her daughter's trailer home was filled with smoke. First responders and police were already there, where the police chief met Susan and her husband out front.

"I said, 'Have they found Sheila?' and he looked at me with tears in his eyes, and he said, 'I don't have that information,'" Susan said.

But it didn't look good. Sheila's car was in the driveway, and she wasn't answering her phone.

"It was just like I knew she was gone. All I could do was stand there," Susan said.

David Deviney, however, rushed past firefighters hoping for a miracle.

"I managed to get in. The ashes were deep. I never found her," he said.

Nobody found her until the smoke finally cleared. Firefighters discovered Sheila on the kitchen floor, burned beyond recognition. At first, it appeared to have been a horrible accident. The fire marshal initially determined a melted pan on an electric stove started the inferno. The fact that her body had been found in the kitchen, just feet from the stove, seemed to fit.

"He was asking questions, you know, about her having enemies and things of that nature," David Deviney said.

It's not clear just what piqued the coroner's suspicions, but an autopsy was ordered to help better understand what had happened to Sheila. While awaiting the results, the Devineys questioned everything and everyone.

Was their daughter's death an accident or something more sinister?

And if it was, was a killer among them?

Sheila had two ex-husbands including one from whom she had recently split. The other had a history of violence.

Sheila Deviney had once been the toast of the town, the cheerleader who married the local football star, Tyson Hendrix. The high school sweethearts wed in 1993 and had two children together. However, five years in, the marriage ended in a bitter divorce and contentious child custody battle.

"She would not even exchange the children with him here," David Deviney said. "They had to meet in a public place. She was that scared of him."

A judge approved a restraining order against Hendrix after Sheila complained that he had physically abused her and her children.

"We were having our heart-to-heart talk, and she said, 'Mom, he's going to kill me,' and I said, 'Tyson is not going to kill you. He can't,'" Susan Deviney said.

Digging deeper into court records, we discovered Hendrix owed Sheila $20,000 in child support, and the court had given him an ultimatum: pay up or go to jail. The money was due Jan. 5, 2004.

"Then the next day she was burned, killed and we believe still alive during the fire," David Deviney said.

Coincidence or connection? It's a strong theory, but it's not the only theory.

Sheila's second ex-husband, Wayne Braxton, was also in the picture. He had actually been staying at her place a few nights a week. However, he maintains they argued the night before the fire, and he left town.

More mysterious than that, there's been talk of a third companion -- someone who might have been jealous or angry over husband No. 2 being back in Sheila's life. In Sheila's last phone call, shortly before the fire started, she spoke of a "special friend" who had just arrived at her house.

That friend was never identified.

In fact, no one was questioned for several months. We built a timeline to better understand the case's progression (January to April). The Oklahoma State Bureau of Investigation immediately began testing a shred of shirt and a piece of carpet from beneath the body. A few months later, the Devineys met with fire investigators to discuss their growing suspicion of foul play.

Lisa Monahan: "When did you start thinking it's not a accident?"

David Deviney: "Tyson had made the threat to burn her out, and nobody would ever know the difference."

Then the discovery that confirmed their suspicions -- tests showed the presence of a highly flammable liquid in the clothing and carpet samples. Sheila's autopsy revealed the presence of accelerants in her blood and lungs, indicating that she had been burned alive.

The fire marshal's office reversed its opinion that September from accident to arson. But by then, the burned-out trailer and any evidence it contained, was long gone.

"It was demolished the very next day," said David Ballard.

The day after the fire, according to the Devineys, Tyson Hendrix insisted on bulldozing what was left of the home. One neighbor said he seemed nervous.

"He was running the backhoe just extremely erratically. And he looked straight at me and said, 'Do you think I did this?' And at the time, it didn't dawn on me that anyone had done it," said Daniel Beck.

The Devineys hired a private investigator to find some answers, starting with why their daughter's ex-husband would volunteer so quickly to obliterate the crime scene.

"That would be a good way to make sure no one ever finds it," David Ballard said.

Fortunately, the Devineys had the forethought to preserve what little evidence they did have from the scene, including photographs that they believe show there were three ignition points in the trailer.

"One was just above a propane heater in the living room. One was in the kitchen on the floor, and one was in the bathroom," Ballard said.

Fire investigators say Hendrix denied any involvement in the fire or in Sheila's death, claiming he was at work.

We found several witness statements, however, that contradict his alibi. Hendrix's foreman said he left work abruptly with an unidentified man around 8 a.m.

"I thought he would want to know," said Betty Deviney, Sheila's sister-in-law. She called his place of employment right after they found out Sheila had died in the fire.

"He cussed at me for calling him and told me he already knew that," Betty said. "There is no way he could have known this was happening."

Another witness, Daniel Beck, followed the fire truck to Sheila's house around 10 a.m.

"Tyson, I believe, was there whenever I got there, whenever I actually pulled in," Beck said.

Was Tyson Hendrix there before the fire was reported? There was only one way to find out.

Lisa Monahan: "I want to speak with you about your ex-wife's murder."

Tyson Hendrix: "Okay?! As to what? I've never been told anything other than she died in a house fire. You need to look into your source a little better."

Lisa called Tyson's second wife, Amy: "I spoke with your husband about the murder of Sheila Deviney, and it occurred to me that no one has asked where you were the morning of the fire."

Lisa Monahan: "Do you know who killed Sheila Deviney?"

A multicounty grand jury reportedly didn't get much out of Hendrix, his second wife, or his brother when it took up the case in 2006. The grand jury didn't return any indictments and was critical of the initial investigation, asking for more information on potential suspects.

Since that time, the OSBI has been working to do more forensic tests on evidence that is still available.

"I'm going to go with an open mind and see where the evidence leads us," Gatlin said.

With a focus on advancements in technology, especially with cell phones, Gatlin said he's working to get phone records that were sealed by the grand jury.

"Specifically, you say you were here. Let's see if we can put you there at that date and time and kind of rule you out as being a suspect," Gatlin said.

The OSBI won't say who they're targeting, but investigators hope to make an arrest soon.

The Devineys meanwhile remain determined and undaunted almost 19 years after losing their daughter.

"You always feel when you lose a family member," said David Deviney.

Mother Susan Deviney said, "There is hurt, just as much there today as it was then -- but somehow, between the two of us, our fight goes."

If you have any information, contact OSBI at tips@osbi.ok.gov.