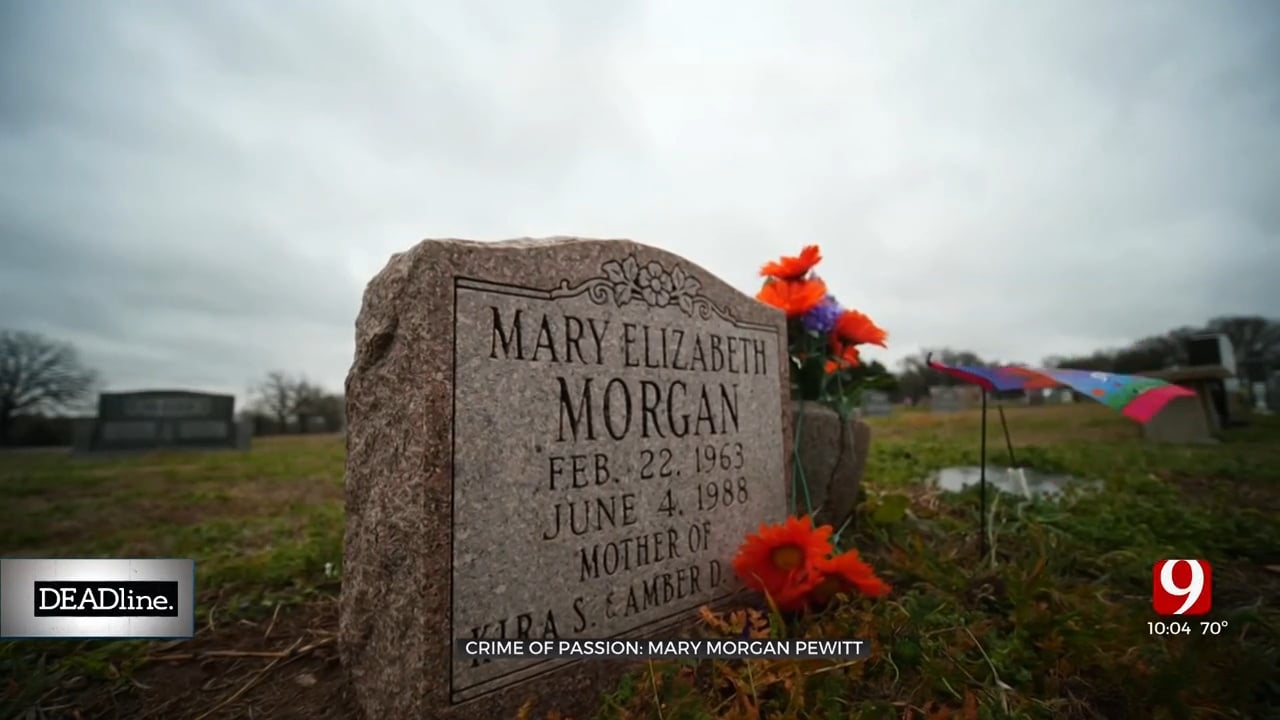 We also introduced you to one of the persons of interest in her death, boyfriend Randy Benson.

That's where licensed investigator and News 9 investigative journalist Lisa Monahan picks up, with Benson and the other suspects.

Monahan started by tracking down people who knew Randy Benson after the Pewitt murder but who were unaware of his potential connection to the case. In hindsight, some say his behavior was suspicious.

"He would say things like, 'I just want to kill that *****.' I mean, I can hear his voice in my head saying that, but that was just Randy's vernacular," said Ryan Welton, who worked with Benson at a Norman night club in the early 1990s.

Clear evidence of that was captured in a comment Benson made about an ex-girlfriend in that recorded phone conversation with Mary's daughter.

"She's just been driving me crazy," Benson said. "She's just... I mean, I'm not going to kill her or nothing, but I would like to punch her (laughs)."

Randy Benson always maintained his innocence, but there's one other bit of circumstantial evidence against him -- the fact that Mary was found with no panties on.

What happened to them? Were they just overlooked? Or did her killer take them as a souvenir?

Those who knew Randy Benson say he often made random, crude remarks about ladies' underwear, collected them even.

And apparently, he wasn't the only one.

While searching records on Deems Rowell, another person of interest, Monahan found this:

Monahan: "(Name redacted) accused you of stealing her panties. What was that all about?"

In 2017, a woman claimed Rowell "hit her, pushed her, and threatened to kill her." The protective order further stated she found a pair of dirty underwear on a hanger in his closet. Rowell denies it.

Monahan: "What are you guilty of?”

Rowell: "I'm guilty of being a fool."

Rowell has a violent, criminal history that includes kidnapping, assault, and a second-degree murder exoneration. In one case, he's accused of cutting a woman on her back, which is noteworthy given how Pewitt was killed.

"I never cut anyone. I collect knives. I did then. Nothing illegal ever done with those numbers," Rowell said.

His knife collection has never been tested for evidence, but Rowell said investigators have searched his home, collected his DNA, and given him a polygraph test, which he failed.

"They've always tried to blame me for it," Rowell said.

Since investigators have his DNA and he's never been arrested in connection to Pewitt's death, it would seem that either the sample ruled him out or the Oklahoma State Bureau of Investigation has yet to run it. We don't know for sure because the investigation is sealed.

Monahan: "Did you kill Mary?"

Rowell said his only connection to Pewitt is that they ran in the same drug circles.

Rowell offered up that somebody named Riland Miller and a Don Allen Jr. make have killed Pewitt because of a debt she had incurred while dealing cocaine.

That brings up the second theory in Pewitt's murder investigation: drug retribution. Pewitt was supposedly dealing out of Harold's Club in Comanche. She had been caught skimming off the top, couldn't pay it back and was killed as punishment.

Following leads, we were able to track down Riland Miller, a convicted drug trafficker in the area.

"I just want to let them little girls know that I was trying to help, and then they start acting like I'm a suspect," Miller said. "There's no way that I would be that."

Miller denied working for a local drug ring. Our investigation indicated that he and his late brother, Robert, were enforcers for the ring's hitman -- but then he contradicted himself.

"I know a hit man. They don't kill people because they want to," he said.

Miller stopped short of giving a name for the hitman. Instead, we were pointed to Don Allen Jr., who has been convicted numerous times for drug possession and trafficking in Oklahoma and Texas. Allen Jr. has been under suspicion because he made a drug run to Texas with Pewitt around the time of her death.

"I don't know if he got down there and got involved with something he shouldn't have or whatever, but that can happen," Miller said.

The only way to find out was to track down Don Allen Jr.

Monahan: "Did she ever make a drug run with you?"

Monahan: "Did anything go wrong during that drug deal?"

Monahan: "Would there be any reason someone would want her dead?"

He said he brokered the deal and that Pewitt and several other unknown men went along for the ride. They brought the drugs back to Oklahoma and then allegedly went separate ways.

Monahan: "What happened to the drugs at that point?"

"I don't know who she was involved with," Allen Jr. added.

For somebody so well connected to Pewitt, he didn't know much. What's more, he couldn't say exactly where he was when Pewitt was killed.

Monahan: "Where were you the night of her murder?"

Monahan: "Did you have any involvement in Mary's murder?"

"I took a polygraph test to prove my innocence," he added.

Allen Jr. said his DNA is also on file. In fact, there are samples for nearly everybody under suspicion.

Coincidentally, Allen Jr. is also the brother of Pewitt's second husband, a man named Tim Allen, who was in a tumultuous child custody battle with Pewitt. Allen refused to talk. He and his second wife, Lynn, were accused in several violent assaults on Pewitt, which piqued investigator interest early in the investigation.

Pewitt's daughter, Kira, said she and her sister saw some of those assaults.

"Other times they attacked when we were in the bushes watching helplessly," she said.

"I saw Lynn put away something, which I believed to be a weapon of some sort. Tim had her backed into a corner, and she reached for an ice pick and stabbed him," she said.

Could Pewitt's brutal killing with a knife, thrust dozens of times into her upper torso and face, have been Allen's revenge? Or possibly the dirty work of someone Allen hired?

To explain the murder-for-hire theory, I started digging deeper into the child custody agreement. It turns out that Allen had been ordered to pay thousands of dollars to Pewitt from a workers compensation settlement. Adding to the suspicion, Pewitt's parents told investigators that on the night of the killing, Allen called to ask if their girls would be staying with them for the night.

And then later in the evening...

"I stepped out on the front porch," said Jeff Arnold.

Pewitt's neighbor saw something that got his attention.

"A pickup pulled up to the house, who I assumed was her. I saw a female get out and go to the house. I assumed it was her, but it was dark, and I couldn't tell," Arnold said.

The truck and the woman who approached the house were never identified. Allen and his wife, Lynn, were each other's alibi. After Pewitt died, they got custody of both children and half of Pewitt's estate.

They refused and hired a lawyer.

"The Allens, of course, want this solved but not at their expense. They want people to stop looking at them as suspects, but they don't have anything to offer the OSBI," said defense attorney Irven Box.

DNA could help rule them out if investigators collected and, more important, preserved evidence from the crime scene.

"It was like New York City," said Larry Pewitt. "Let anybody and everybody see everything."

Pewitt is a former Comanche Police officer who remembers distinctly that investigators collected cigarette butts, beer cans, hair and more from the scene.

"They just didn't take care of it like they should have," Pewitt said. "They sort of put it in a closet and stepped on it.”

By all accounts, Stanley had several ties to this case but was allegedly in jail the night of Mary Pewitt's death. He has also since passed -- as have time, answers and perhaps even evidence.

Investigators said work is going on behind the scenes at the OSBI in hopes of solving this case.

"One of the obstacles with old evidence is how much you have left every time you run a piece," said Special Agent Francia Thompson. "It does take it away a little bit eventually where we might not have anything left. So, we have to be careful."

Unfortunately, this could mean more time that Mary Pewitt's family will be waiting and wondering who's the killer.

"Am I having Christmas dinner with this person? Am I meeting this person in town? Just put yourself in someone else's shoes. It's not too late to speak up," Mary Pewitt's daughter, Kira, said.