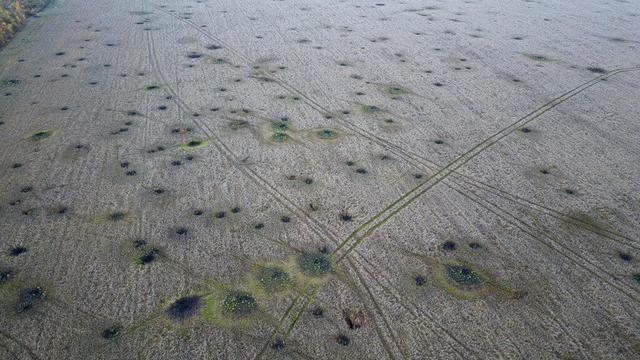 After being encircled by Ukrainian forces, Russia pulled troops out Saturday from an eastern Ukrainian city that it had been using as a front-line hub. It was the latest victory for the Ukrainian counteroffensive that has humiliated and angered the Kremlin.

Russia's withdrawal from Lyman complicates its internationally vilified move to annex four regions of Ukraine and paves the way for Ukrainian troops to potentially push further into land that Moscow now illegally claims as its own.

The fighting comes at a pivotal moment in Russian President Vladimir Putin's war. Facing Ukrainian gains on the battlefield — which he frames as a U.S.-orchestrated effort to destroy Russia — Putin this week heightened his threats of nuclear force and used his most aggressive, anti-Western rhetoric to date.

Russia's Defense Ministry claimed to have inflicted damage on Ukrainian forces in battling to hold onto Lyman, but said outnumbered Russian troops were withdrawn to more favorable positions. The Russian announcement came soon after Ukraine's air force said it had moved into Lyman and the Ukrainian president's chief of staff posted photos of a Ukrainian flag being hoisted on the town's outskirts.

Lyman, a key transport hub, had been an important node in the Russian front line for both ground communications and logistics.

Ukrainian forces have retaken vast swathes of territory in a counteroffensive that started in September which saw them push Russian forces out of the Kharkiv area and move east across the Oskil River toward Lyman and other strategic points.

Meanwhile, Russian bombardments have intensified in recent days as Moscow moved swiftly with the annexation and ordered a mass mobilization at home to bolster its forces.

Despite Putin's land-grab Friday of four regions, Ukrainian President Volodymyr Zelenskyy and his military have vowed to keep on fighting to liberate the annexed regions and other Russian-occupied areas.

The governor of the Kharkiv region, Oleh Syniehubov, said 24 civilians were killed in an attack earlier this week on a convoy of people trying to flee the Kupiansk district, calling it "сruelty that can't be justified." He said 13 children and a pregnant woman were among the dead.

"The Russians fired at civilians almost at point-blank range," Syniehubov wrote on the messaging app Telegram.

The Security Service of Ukraine, the secret police force known by the acronym SBU, posted photographs of the attacked convoy. At least one truck appeared to have been blown up, with burned corpses in what remained of its truck bed. Another vehicle at the front of the convoy also had been ablaze. Bodies lay on the side of the road or still inside their vehicles, which appeared pockmarked with bullet holes.

Russia's Defense Ministry said its rockets destroyed Ukrainian military targets in the area, but has not commented on accusations that it targeted fleeing civilians. Russian troops have retreated from much of the Kharkiv region amid the successful Ukrainian counteroffensive but have continued to shell the area.