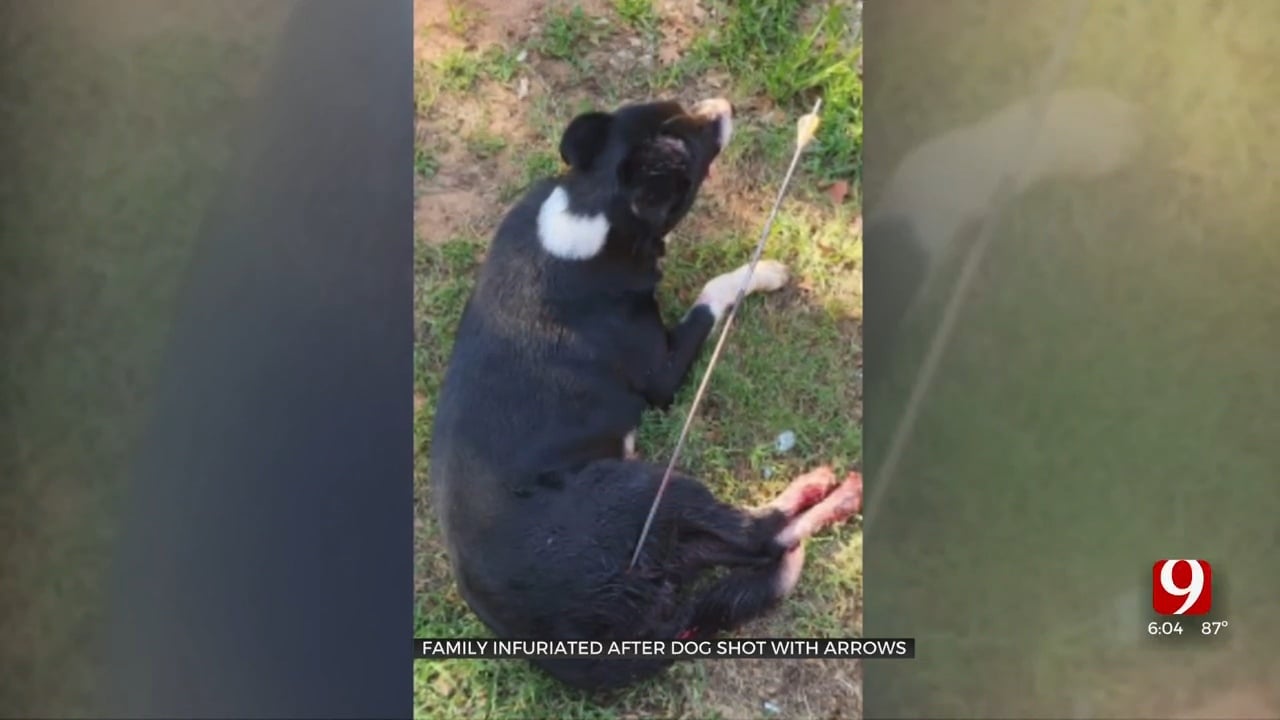 A Shawnee family is shaken up after their dog was shot with an arrow in their backyard.

The dog’s owner, Melody Davis, said this has been a horrible two weeks for their family.

Koda was shot in the leg, leading to an array of medical complications.

Davis said she doesn’t understand how anybody could have done this to her dog. She said Koda has never been violent or aggressive towards neighbors or family.

Davis said she got a call from her husband last Monday and said she had never heard fear and panic like that in his voice.

They immediately called the vet, who came to their home. The vet had to cut the arrow, and make an exit wound to pull part of it out, so the wound wouldn't get worse.

“The arrow used on him, it was just absolutely cruel and it was mean," said Davis.

After stitches and a few days at the vet, Koda was able to go back home to his family. The Davis family thought they were finally in the clear.

“The vet told me how lucky he was that it only went through the muscle, and that he would be sore for a few days and that we would be back in 2 weeks to remove the stitches," said Davis.

But that was just the start of Koda's medical complications. Shortly after getting home, Koda's symptoms started getting worse, and his health was quickly declining.

“We were concerned, and we were scared, and we didn't know what was going on," said Davis.

They rushed Koda back to the vet and realized that Koda had actually been shot by two separate arrows, not just the one like they had originally thought.

“The second arrow had actually done more damage that we weren't aware of until the complications arose over the weekend after we took him home," said Davis.

The Davis family has some speculation about who may be responsible but did not share details. They filed a report with the sheriff, and after investigating, the sheriff's office closed the case. The sheriff's office came out to the scene, and did what they could, but ultimately said there was not much evidence to go on.

“The sheriff called back Friday and said they were going to close the case because there wasn't really any proof of who had done this," said Davis.

Still, the Davis' think somebody should be held accountable.

“Shooting once may be an accident. But him being shot twice, that was absolutely not an accident," said Davis.

News 9 spoke with the Potawatomie County Sheriff's office, and they said if any new information comes up, or any suspects come forward, they will continue investigating.

They are hoping to be able to bring Koda home for good this weekend, if he is fully recovered.

“We miss him. And we want him to come home. and I just don't know how somebody can do this to him," said Davis.

The Davis' started a Go-Fund-Me to help pay for Koda's expensive vet bill.