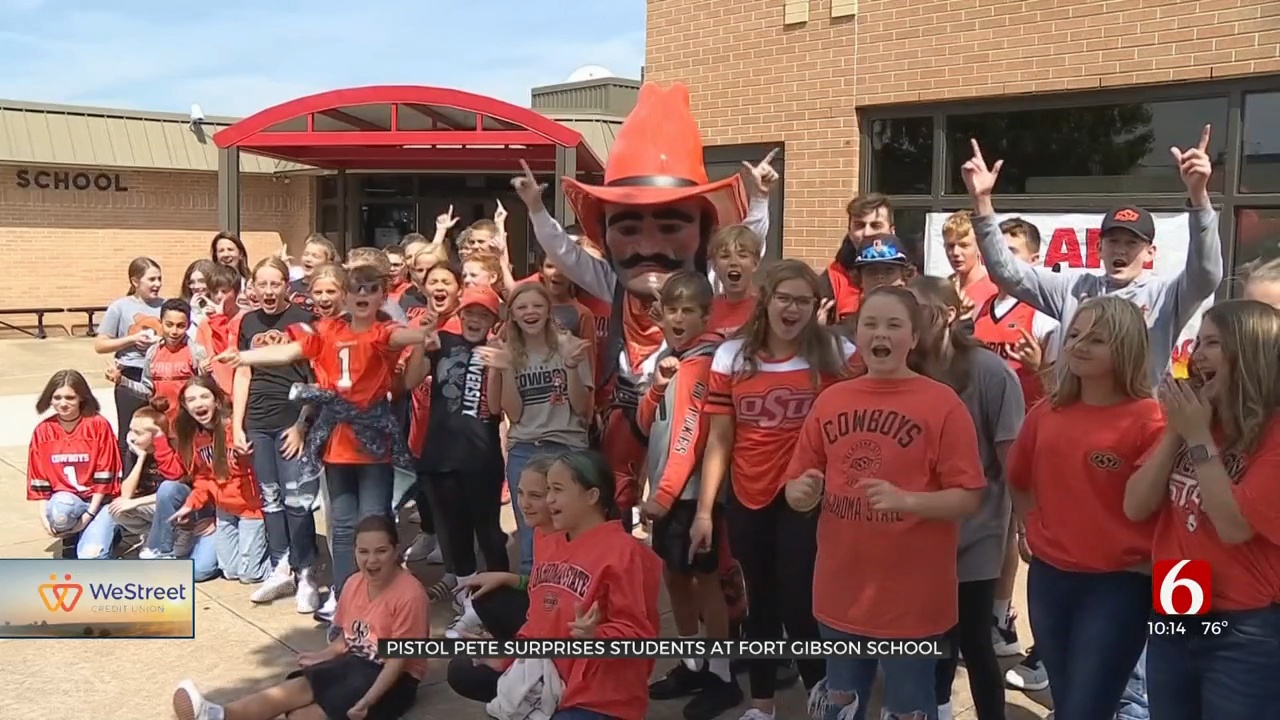 Thirteen-year-old Karson and nine-year-old Kase are brother and sister who live in Fort Gibson. They thought today was going to be like any other day at school, until they had a surprise visit from a famous mascot.

The two needed a day like today after overcoming tragedy.

Fort Gibson Public Schools had a special guest grace the hallways on Thursday. Shocked faces and beaming smiles doesn’t even begin to describe the kids' reaction to seeing Pistol Pete in person.

“I brought a special guest with me," said Sean McCabe, OSU Foundation.

Since the summer, Kase has been asking his grandma if they could go to an OSU game this season.

Cindy Impson said they didn't get to go to a game last year because of a tragic car accident that devastated the family.

“Karson and Kase have had a very rough year and a half. They lost their parents in April of 2021 in a horrible car accident, car wreck. Kase and Karson were both injured very severely. Kase is now a paraplegic," said Impson.

She said their parents Klint and Katie loved the Cowboys.

“O-S-U, Go Cowboys. I'm gonna change you all into fans," shouted a teacher.

“They’re a spittin' image of their mom and dad, inside and out," said Impson.

“[Their parents] made sure that Karson and Kase always, from the time they were little, had OSU t-shirts and caps and just everything that went along with OSU, they did," said Impson. "Karson can tell you where every building is. Her favorite place in the whole campus is the library. Kase is, he just likes to go. He just likes to go and look around and see you know all the different things that OSU has to offer.”

Thanks to the OSU Foundation, Kase got his answer about going to a game from Pistol Pete, himself.

“He wanted to come out and offer you the opportunity to come back to Stillwater as his guest for a football game," said McCabe.

Impson said McCabe has been great to her family and has sent the kids many OSU care packages.

“Sean had asked us several different times you know, what is something we can do? What can we do? He’s tried many, many times to get us up to OSU because Karson and Kase both love OSU and my husband and I both graduated from there," said Impson. “He came through big time for us. Out of the kindness of so many people, we got to surprise Karson and Kase with Pistol Pete visiting their school on Bedlam day. [...] This was homecoming week and today was Bedlam day, so it worked out great, so we’re having an OSU, OU war and I think OSU won cause Pistol Pete’s here.”

She said they can't wait for gameday. “We are all gonna get to go as a family to the game," said Impson.

Impson said they'll have some pretty sweet seats, but Klint and Katie will have the best view of the game.

“They’re rejoicing in heaven. They are…. Klint and Katie were both shy just like Karson and Kayson. They were both very successful but they never wanted to be in the limelight. They wanted to be behind the scenes exactly like Karson and Kase. They excelled at everything they did, and you can tell by the love that is shown to them how much they were loved," said Impson.

Karson and Kase will cheer on the pokes on November 12, during the OSU verses Iowa State game.

Impson said she is so grateful to everyone who has stepped up and wrapped their arms around the family.

“We have been so blessed. We are so blessed by all of the kindness that people from everywhere have shown us," said Impson. "People just continue to reach out and hold our hands through this."

The family is holding a Memorial Run on October 15 in Fort Gibson to honor Klint and Katie.