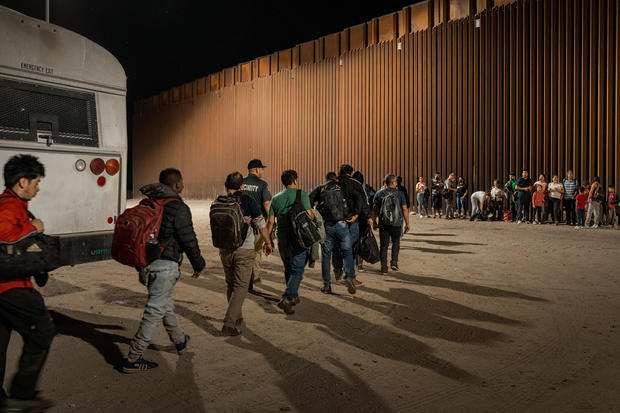 Chris Magnus, the head of U.S. Customs and Border Protection (CBP), acknowledged on Thursday that Title 42, a Trump-era border rule that the Biden administration has enforced for a year and a half, has had a "human cost" on migrants, stranding them in parts of Mexico where they endure poor conditions and insecurity.

"One of the things that I think can't be denied is that conditions are very, very difficult for the individuals who are returned to Mexico," Magnus said. "We know that some of the shelters, some of the other places where migrants find themselves waiting, are not great for families and children."

The U.S. advocacy group Human Rights First has compiled more than 10,000 reports of attacks, kidnappings and murders against migrants stranded in Mexico since President Biden took office in January 2021. The U.S. expels some migrants to Mexican states that Americans are advised to avoid visiting because of widespread crime and kidnappings.

Magnus said the continued enforcement of Title 42, which a federal court mandated in May, is also exacerbating the operational challenges faced by his agents, because the policy has allowed many migrants to try to enter the U.S. multiple times, inflating the record levels of migrant arrests recorded over the past year. CBP said 22% of its border arrests in July involved migrants who had been previously detained.

"It is frustrating for our agents and officers in that we are, you know, we're expelling many people, many migrants who are covered under Title 42, only to see them attempt and in fact in some cases even successfully re-cross the border over and over again, because under Title 42, there are no consequences," Magnus said.

While Title 42 blocks migrants from seeking asylum, expulsions under the policy do not come with multi-year banishments from the U.S. or the threat of detention or criminal prosecution, unlike formal deportations.

Despite the problems it has caused, Magnus said Title 42 in some ways "has value," noting the expulsions limit the number of migrants allowed into the U.S., especially Mexican border-crossers who make up the bulk of those who face expulsion. Magnus also said the policy had "some public health value in the past."

"There are certainly some advantages to Title 42. But there's also a human cost to it," Magnus added.

First authorized in March 2020 by the Centers for Disease Control and Prevention (CDC) during the outset of the coronavirus pandemic, Title 42 has allowed U.S. officials along the Mexican border to expel migrants more than 2 million times to Mexico or their home countries in over two years, government statistics show.

Despite its stated public health justification, the CDC order authorizing the expulsions was signed over the objection of top experts at the agency who did not believe the policy was justified, according to congressional testimony and CBS News reporting.

The Biden administration defended Title 42 as a necessary public health measure for over a year, but it moved to discontinue the policy this spring. A coalition of Republican state attorneys general, however, convinced a federal judge in Louisiana to force border officials to continue the expulsions indefinitely.

While tens of thousands of migrants continue to be expelled each month, the percentage of border-crossers subjected to Title 42 has decreased recently. In July, roughly 40% of the migrants taken into Border Patrol custody faced expulsion, according to CBP data.

The lower expulsion percentage can in part be attributed to the record arrival of migrants from Cuba, Venezuela, Nicaragua and other countries where the U.S. can't expel individuals because of strained diplomatic relationships or logistical challenges. In July, nearly 50% of border encounters involved migrants from countries outside of Mexico and Central America's Northern Triangle.

Under Mr. Biden, arrests along the U.S.-Mexico border have reached the highest levels on record. CBP has reported nearly 2 million migrant encounters in fiscal year 2022, a tally that has surpassed the record set in 2021, even with two months left in the fiscal year, agency data show.

Magnus said he's not sure if border arrivals will return to pre-pandemic levels, noting the world is experiencing a historic displacement crisis, with millions of people forced to flee their homelands, according to the United Nations.

"There's unprecedented levels of cartel and gang violence in other countries, political upheaval. People are at real risk. Some of them really [face] such danger for their families, themselves, that they see no alternative but to flee," he said.

But Republican lawmakers have said the historic migration wave is a direct result of the Biden administration's rhetoric and policies, including its reversal of some Trump-era asylum restrictions. They have accused the administration of lax border enforcement and denounced mass releases of migrants.

Asked if it's possible that the record border arrivals have been fueled by conditions in migrants' home countries and human smugglers taking advantage of what they see as more welcoming policies under Mr. Biden, Magnus said he doesn't think "there's any one particular push or pull factor."