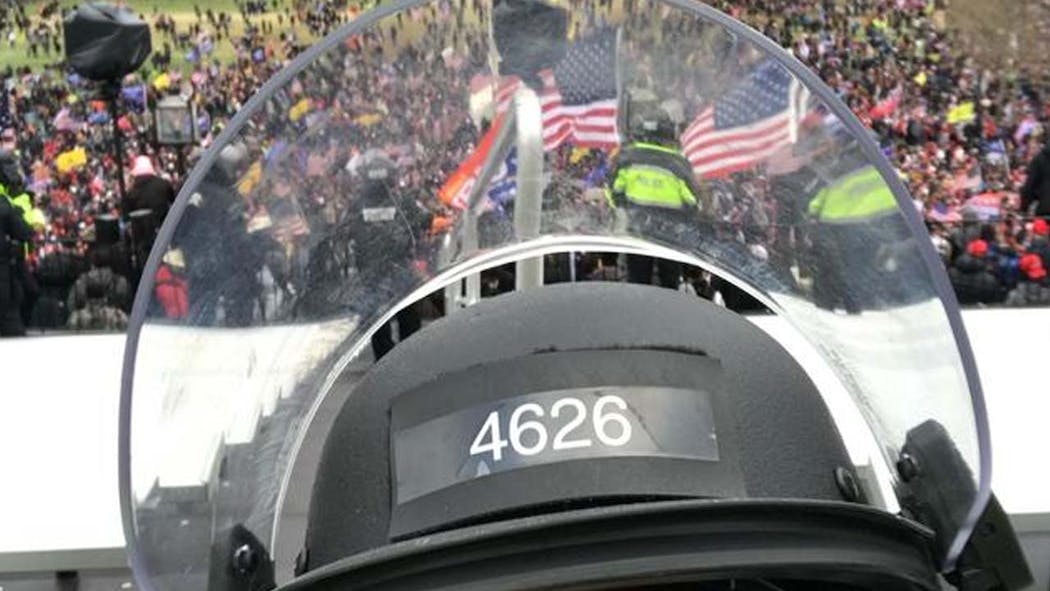 President Biden on Tuesday signed a bill into law which extends disability and death benefits to families of officers who suffer from post-traumatic stress disorder or die by suicide in the line of duty. The Public Safety Officer Support Act of 2022 is part of a larger effort to recognize the emotional impacts of traumatic events on first responders nationwide.

Erin Smith fought for months for death benefits after her husband – Washington, D.C., Metropolitan police officer Jeffrey Smith – died nine days after the Jan. 6 assault on the Capitol. A 12-year veteran of the department, Jeff Smith was the target of several attacks that day after responding to the mob of rioters who breached the Capitol.

"I have gone through hell and back to get my husband's death declared line of duty, and to get the Metropolitan Police Dept. and the city of D.C. to recognize that the brain injury he received on duty is the reason he is no longer here with us today," Erin Smith said in a statement Tuesday.

Like many parts of the country, Washington, D.C., did not consider suicide a line-of-duty death, which left Erin Smith without health insurance and income following her husband's passing. In March, the District of Columbia recognized that the injury her husband sustained on Jan. 6 while performing his duties was the "sole and direct cause" of his death.

"This bill is not only for my husband, but for all law enforcement and first responder families that have been tossed to the side because no one believed that their family members' death was Line of Duty and caused by their job," Erin Smith added in her statement.

"This was an experience that no widow or widower, or child should ever have to suffer again," Erin's attorney David Weber told CBS News in a statement. "Put quite literally, Jeffrey Smith's actions on January 6th have changed the conversation forever of police mental health and how we care for our protectors in the aftermath."

Introduced by Reps. David Trone (D - Maryland) and Guy Reschenthaler (R - Pennsylvania), along with Sens. Tammy Duckworth (D - Illinois) and John Cornyn (R - Texas), the legislation cleared the Senate earlier this month by unanimous consent. The House passed the bill in May with overwhelming bipartisan support, with just 17 Republican lawmakers voting against it.

"First responders often experience more trauma in one day than many of us will experience in our lifetimes," Trone said. "This takes a significant toll on the officers and sometimes leads to disability or even suicide."

Biden's signature permits for the expansion of the Public Safety Officers' Benefits Program, which previously only addressed physical injuries of law enforcement. The updated legislation allows public safety officers to seek disability benefits for PTSD tied to severe trauma in the line of duty. Families of law enforcement and first responders who die by suicide are now entitled to seek death benefits now that suicide is recognized as a line-of-duty death.

While appreciative the bill became law, Erin Smith was disappointed that the president signed the bill into law behind closed doors, without ceremony.

"It feels like suicides again are being pushed to the side, just as they have been for years, because of political calculations that have nothing to do with all the men and women who don't get a choice, including my husband, of when to put on their badge and go to work," she said in her statement Tuesday.

Erin Smith is now petitioning to have her husband's name added to the National Law Enforcement Memorial in Washington, D.C., and to see that he is buried at Arlington National Cemetery, next to U.S. Capitol Police Officer Brian Sicknick, who died of natural causes a day after defending the Capitol. Sicknick was laid to rest in February 2021.

If you or someone you know is in emotional distress or suicidal crisis, please call the National Suicide Prevention Hotline at 1-800-273-TALK (8255).

For more information about mental health care resources and support, The National Alliance on Mental Illness (NAMI) HelpLine can be reached Monday through Friday, 10 a.m.–6 p.m. ET, at 1-800-950-NAMI (6264), or by email at info@nami.org.

﻿It is our policy to provide resources for anybody considering self-harm when reporting about a situation involving suicide or a suicide attempt.

Crisis Text Line is a texting service for emotional crisis support. To speak with a trained listener, text HELLO to 741741. It is free, available 24/7, and confidential.﻿