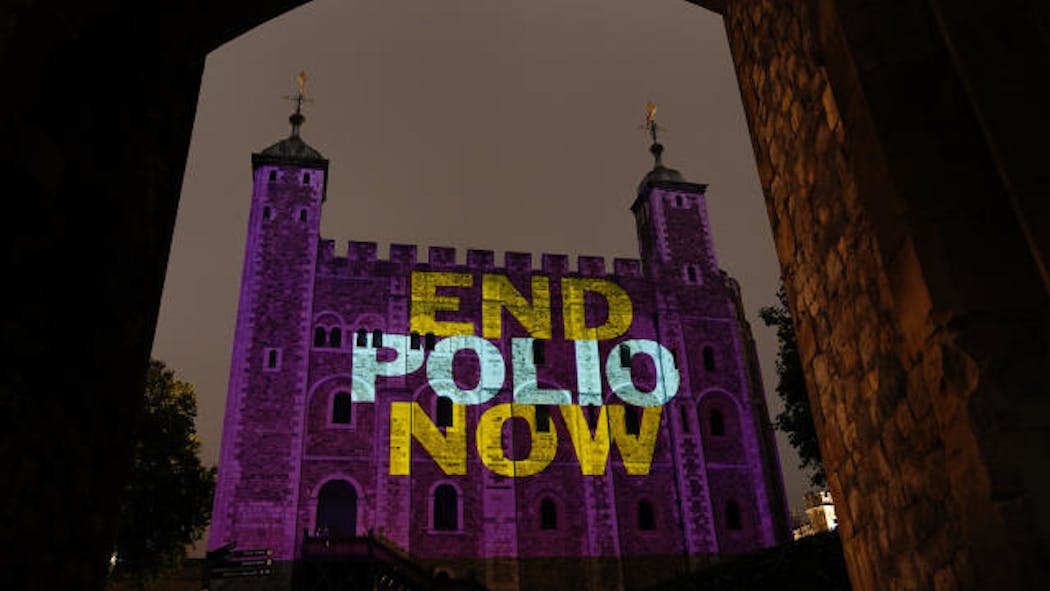 British health authorities say they will offer a polio booster vaccine to children aged 1 to 9 in London, after finding evidence the virus has been spreading in multiple regions of the capital, despite not confirming any cases of the paralytic disease in people.

In a statement on Wednesday, Britain's Health Security Agency said it had detected polio viruses derived from the oral polio vaccine in sewage water from eight boroughs of London, but had not identified any cases.

Its analysis of the virus samples suggested "transmission has gone beyond a close network of a few individuals" but that it had not found anyone infected with the virus. According to the World Health Organization, only one in 200 polio infections leads to paralysis; most people don't show any symptoms.

"This will ensure a high level of protection from paralysis and help reduce further spread," the agency said. Most people across Britain are vaccinated against polio in childhood. It said the risk to the wider population was low.

The agency said it was working closely with health authorities in the U.S. and Israel and WHO to investigate the links between polio viruses detected in those two countries.

"We know the areas in London where the poliovirus is being transmitted have some of the lowest vaccination rates," said Dr. Vanessa Saliba, a consultant epidemiologist at the U.K. Health Security Agency. "This is why the virus is spreading in these communities and puts those residents not fully vaccinated at greater risk."

Polio is a disease often spread in water that mostly affects children under 5. It has mostly been wiped out from developed countries, but outbreaks remain in Pakistan, Afghanistan and parts of Africa. Initial symptoms include fever, fatigue, headache, vomiting, and muscle stiffness. Among people paralyzed by the disease, death can occur in up to 10% of cases when their breathing muscles become paralyzed.

In rare cases, the live virus contained in the oral polio vaccine used in the global effort to eradicate the disease can mutate into new forms potent enough to trigger new outbreaks. The vaccination booster effort in London will use injected polio vaccines that do not carry that risk.

Polio has also raised concern in the U.S. Last week, New York state health officials said they found indications of additional cases of the virus in wastewater samples from two different counties, leading them to warn that hundreds of people may be infected with the potentially serious virus.

Last month, the New York Health Department reported the nation's first case of polio in almost a decade, in Rockland County, north of New York City. Officials said that case occurred in a previously healthy young adult who was unvaccinated and developed paralysis in their legs. Since then, three positive wastewater samples from Rockland County and four from neighboring Orange County were discovered and genetically linked to the first case, the health department said in a press release, suggesting that the polio virus is being spread within local communities. The newest samples were taken from two locations in Orange County in June and July and one location in Rockland County in July.