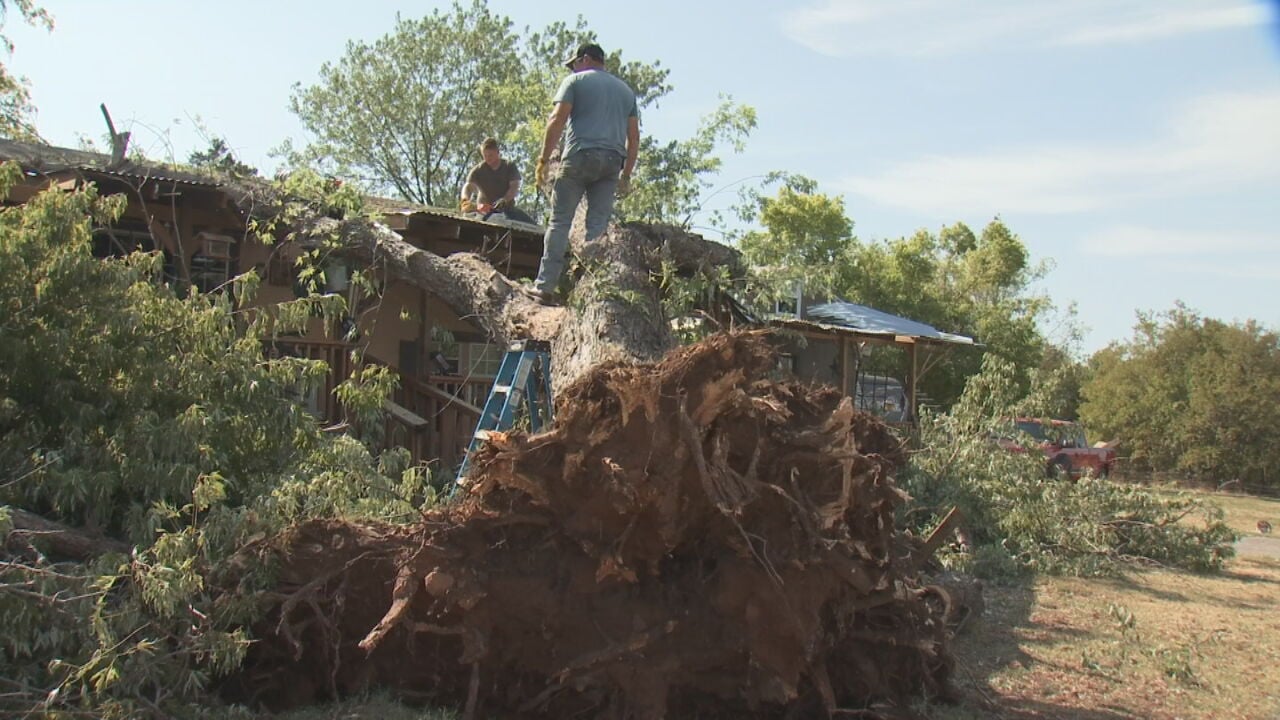 Residents near McAlester are cleaning up debris after severe storms swept through town early this morning.

Jack Pratt said he was asleep inside with his wife and grandkids when strong winds blew through Crowder knocking a tree onto his house.

“About 3 o’clock it was hailing really, really bad. Really loud. Sounded like pretty good-sized hail. Granddaughter busts into the bedroom. Scared to death. Her eyes big around as silver dollars," said Pratt.

The Pratts' grandkids jumped in bed as destructive winds tore through trees and ripped up roots.

"Next thing I know the whole house is shaking cause the big tree fell on the roof right above our bedroom. I get them up out of the bed. We go to the living room and then this big giant tree falls on the house and basically destroys my whole porch," said Pratt.

“I’ve been on the fire department for 43 years. This is probably the most debris I ever seen other than the ice storm," said Gary Brooks, Retired Chief of the Crowder Fire Department.

Gary Brooks said he and other volunteers had a 5 a.m. wakeup call.

“For lightning and electrical fires of poles and electrical lines down,” said Brooks. “Every block has probably a third of the trees has damage to them as far as debris.”

Trees blocked roads and covered cars. “Even for our rural community of about 450, we lost 4 or 5 trampolines," said Brooks. “Rained so hard so fast that it couldn’t get away from the school and come in through the front doors. The cafeteria floors. So, they were supposed to have an open house tonight. I understand they canceled that."

Jack Pratt said it'll be a few days before an adjuster can come. “These good friends of mine called me up and said hey we will come and help you out," said Pratt.

“We’re all taking care of our own little community," said Brooks.

Brooks said they needed some rain. "We’re like everybody else. South of Eufaula needed rain. We got some. We got it all at once, but we got some,” said Brooks.

The city is asking people to pile up their excess limbs on their property near the city streets, not blocking the road, and will come by tomorrow to throw them in the chipper.