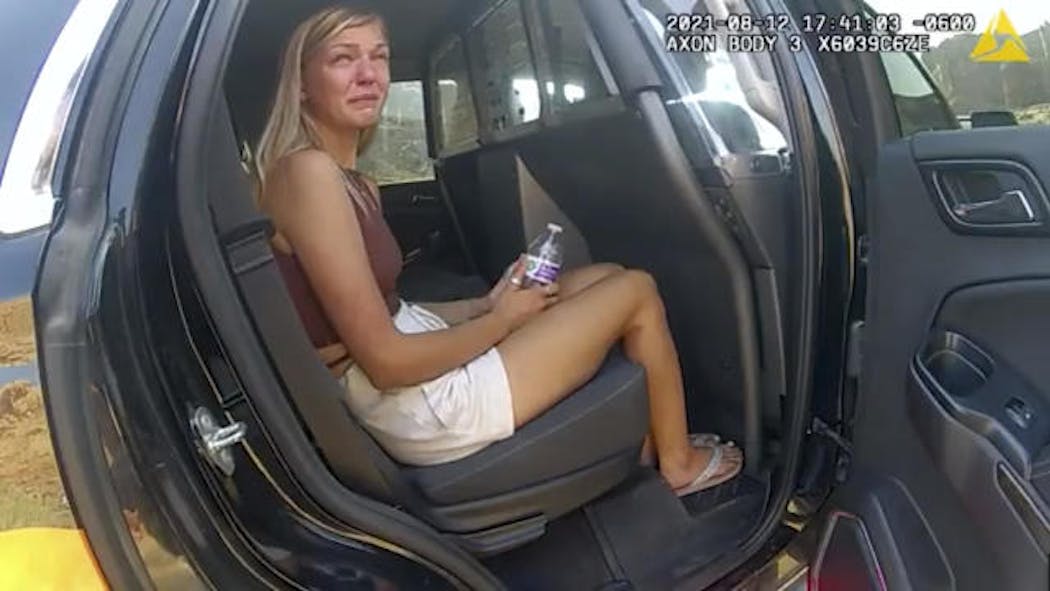 Gabby Petito's family has filed a lawsuit against police in Moab, Utah, accusing them of negligence that resulted in the 22-year-old's death last year. They are seeking $50 million in damages.

The lawsuit, filed by attorneys representing Joseph and Tara Petito and Nichole and Jim Schmidt, names the Moab Police Department; three of its officers: "Palmer," "Pratt" and Daniel Robbins; and 10 other unnamed defendants and accuses them of "negligent failure" in their investigation into an alleged assault between Petito and her fiancé, Brian Laundrie, several weeks prior to her murder.

They also accuse all of the defendants of "wrongful death," saying that Petito's "death was caused by their wrongful acts or neglect." Petito's body was found on Sept. 19, 2021, near a remote campground in Grand Teton National Forest, just over a week after her family reported her missing. She had been on a cross-country trip with Laundrie, who was also found dead weeks later in a reserve in Florida after going on the lam. Authorities located a notebook near his remains in which he confessed to killing his fiancée.

Prior to her death, Petito spoke to several officers with the Moab Police Department after she and Laundrie had a verbal and physical fight in August 2021. Attorneys hired by Petito's parents allege that the officers "failed in their duty to protect Gabby."

According to the lawsuit, a 911 caller reported seeing Laundrie slap Petito and hit her while chasing her down a sidewalk in Moab. Another witness said they saw the two "talking aggressively" and that "something seemed off" — they said it appeared Laundrie took her phone, got in their van and tried to leave her, before she climbed over him and into the van. An officer, identified by the lawsuit as Daniel Robbins, found the couple's van speeding down a highway, swerving across the center yellow line and hitting a curb, the lawsuit said. The van then stopped outside of Arches National Park, where Robbins separated the two and spoke to them.

Robbins was later joined by his superior, identified in the lawsuit as Officer Pratt, and two park rangers.

Body cam photos from the officers' interviews with the two were previously released to the public, but the lawsuit says the photos don't paint the full picture of what actually happened. An unreleased photo of Petito from that day allegedly shows smeared blood on her cheek and her left eye, as well as the fact that Laundrie grabbed her across her nose and mouth.

The lawsuit also includes the photos that were released to the public, one of which, it says, shows a mark on her skin. When asked about it, Petito told the officer Laundrie had grabbed her.

During questioning, Petito showed "the classic hallmarks of an abused partner," according to the lawsuit, trying to take the blame for the incident and asking to stay with Laundrie.

In turn, Laundrie told police that Petito tried to slap him, and he pushed her. At one point he said he tried to take Petito's phone because he didn't have his own, but he later showed officers his own phone. Laundrie also claimed he wanted he and Petito to take separate walks while in Moab, which contradicts witness' statements that he tried to drive off in the van.

The lawsuit accuses the officers of failing to question Laundrie on his inconsistencies. Instead, they found Petito to be the "primary aggressor" and Laundrie the victim. At this point, Pratt told the two he would have to arrest Petitio, which neither of them wanted.

Pratt called his superior, Assistant Chief Palmer, who told him to "carefully read the assault statute" and decide what to do. The lawsuit claims Pratt only read part of it, and had an incorrect understanding of the law — he believed that assault is only a crime if the person "intended to cause bodily injury."

Pratt then told Robbins, who was his junior, to decide. Robbins said he didn't believe Petito and decided not to file charges, but to pass it on to the city attorney. Meanwhile, Pratt warned Robbins that if the couple disagreed with his decision "you might hear about it in a very negative way," the lawsuit said.

A park ranger also disagreed with the decision, saying that "she would rather 'be dinged for a decision I made than a decision I didn't make.'" Pratt added after the ranger's statement, "especially if they think you were completely negligent in your decision," the lawsuit said. Pratt followed by saying he would support Robbins' decision.

Then, as Robbins was filing a citation, Pratt asked if he'd rather respond to another call that had just come in. Robbins stayed, but said he wasn't sure how to proceed.

In consultation with Pratt, Robbins split up Laundrie and Petito for the night. Pratt said that if the couple later found their way back to one another it wouldn't be their responsibility, the lawsuit alleges.

Petito's family conducted an independent investigation into the officers' response, and found that "the officers made several mistakes and could not rule out that Gabby's murder might have been prevented if the officers had handled the situation properly."

The Petito family attorneys also included stories from local newspapers that allege issues among the Moab Police Department. In one, several officers were accused of drinking with minors while on the job. None of the articles mention any of the officers named in the lawsuit.

"While the full evidence has not yet been made public, when it is released, it will clearly show that if the officers had been properly trained and followed the law, Gabby would still be alive today," James McConkie, one of the family attorneys, said in a statement. "Failure to follow the law can have deadly consequences, as it did in this case."

The family is seeking $50 million in damages.

Petito's family also filed a lawsuit against Laundrie's parents, whom they allege knew what happened to their daughter and where her body was while she was still missing. They are seeking $30,000 in damages.

Christopher and Roberta Laundrie responded to the lawsuit in March, calling the claims "baseless" and "frivolous" and seeking to dismiss the suit.