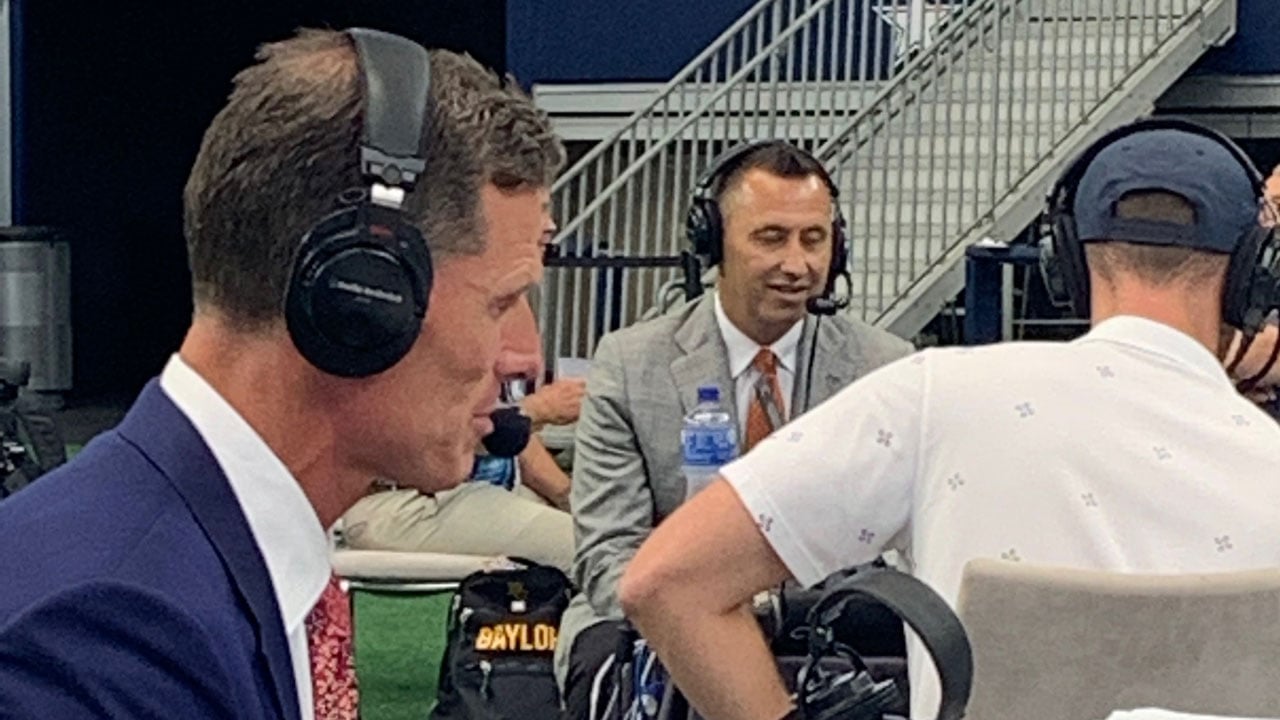 As of Thursday, anyway.

But one influential person jokingly took exception with both schools appearing at Big 12 Media Days.

“It’s interesting. We go to conference meetings, and OU and Texas are in there,” Oklahoma State coach Mike Gundy said Wednesday in Arlington. “They’re still in the conference. But I’m guessing when they leave, they’re scratching down things that can help them when they're in the SEC, so it is an unusual situation. I think there’s a business side of it that nowadays. People say, ‘It is what it is,’ which 10 years ago, they might not even let them in meetings. The new commissioner, I mean, honestly, if I was him, I wouldn’t let OU and Texas in any meetings.”

I hope Gundy was joking about the “scratching down things” part because one thing the SEC does not need guidance on is how to be more like the Big 12.

First Takeaway: Givin’ ‘Em Something To Talk About

Sooners head coach Brent Venables was the first Big 12 coach to hit the stage Thursday. Venables didn’t look nervous. He looked ecstatic to be in Arlington and to be Oklahoma’s head coach, as he was when the university named him the leader last December.

When he began speaking, that’s when his nerves began dueling with his genuine excitement.

Venables began speaking just after 10:35 a.m. and proceeded to go beyond the typical, short introduction most coaches have given this week in Arlington. He threw out some important stats about his team, citing the 33 scholarship players who will don the crimson and cream for the first time in their college careers this season.

The piece de resistance, however, came as he explained how he has been learning on the job as a first-time head coach.

Somebody’s been taking a page from the playbook of News 9 Chief Meteorologist David Payne.

There might not be a more equipped or qualified person to become a first-time head coach at a powerhouse like Oklahoma than Venables. He checks all those boxes.

At the same time, it’s nice to see someone as qualified as Venables express his nerves and excitement in this way. It’s honestly endearing. He gets nervous and excited about things in life just like us regular folk.

Keep being you, Brent.

Sooners wide receiver Marvin Mims has seen a lot change around him since arriving as a heralded recruit from the Dallas-Fort Worth Metroplex.

Mims, a receiver who caught a jaw-dropping 32 touchdowns during his final high school season, came to Norman to do more of the same: catch a lot of footballs for touchdowns.

Through two seasons at OU, Mims has 14. Fourteen isn’t bad by any means, but it is not close to the uncommon pace he is known for.

After sharing the field with the likes of Spencer Rattler, Caleb Williams and Tanner Mordecai (yes, Mordecai threw Mims one touchdown pass in 2020), Mims said OU now has the right man under center.

“Just from having Dillon (Gabriel), he’s the best all-around quarterback we’ve had at OU,” Mims said. “Just the way he reads the field, how comfortable he is in the pocket, his escapability when he needs to get out of the pocket. These are all elite things that we’re going to need when the season comes. It’s something that not every quarterback, especially in this conference, has.”

Mims said he wasn’t just saying that because Gabriel was standing next to him.

Gabriel’s quick connection with Mims suggests that they were cut from a similar cloth.

“Marv(in) and I are similar dudes,” Gabriel said. “Very chill dudes. We can get to the point where we’re having fun and being vocal and doing our thing but very calm and very collected. That’s how we approach life and football.”

The good news for Mims and the Sooner offense: Gabriel can throw the ball around the yard, too. He threw for 8,037 yards and 70 touchdowns over three seasons at Central Florida.

“It’s what you dream of – playing in big-time atmospheres, hostile environments and winning games in those environments,” Gabriel said. “It’s really just made my dreams come into fruition and play in the places I’ve always wanted to play in.”

There was only one athlete from Oklahoma at Big 12 Media Days who did not already play for OU or OSU.

Dadrion Taylor-Demerson is not yet a household name for the Texas Tech Red Raiders, but his star is on the rise.

Taylor-Demerson enjoyed a decorated high school career as a running back at Carl Albert High School in Oklahoma City.

“My recruitment didn’t go as I thought it would,” Taylor-Demerson said. “I kind of got down on myself my senior year. I committed to Utah State and coach (Matt) Wells, who was there, came to Texas Tech. It honestly didn’t matter who I played for. I was going to play wherever I wanted.”

Now he makes his football home in the Red Raider secondary.

“After I got my scholarship pulled at Utah State, coach (Keith) Patterson (Tech’s former defensive coordinator) called me and asked me if I wanted to play safety for him,” Taylor-Demerson said. “So he came to a few of my basketball games and watched me play defense. Of course, I’m locking dudes up. But I really appreciate him for giving me this opportunity, and it’s turned out pretty well for me.”

After two seasons in mostly a reserve role, Taylor-Demerson made his mark on Tech’s 2021 defense. He made seven starts at safety, missed all but one game, broke up 10 passes and led the team with three interceptions.

Taylor-Demerson is thinking big for 2022.

Finalists for the Jim Thorpe Award are announced annually by the Oklahoma Sports Hall of Fame. Each December, the winner of the award is recognized as the best defensive back in college football.

“It would mean more than the world to me to be able to go back (to Oklahoma City) and be given that award while going to the all-state high school ceremony,” Taylor-Demerson said. “And also lead the Big 12 in interceptions and win first team all-Big 12. I can’t do any of that without our team goal, which is winning the Big 12.”

Texas Tech will head into its first full season under Joey McGuire after he took over during the 2021 season. McGuire, Taylor-Demerson suggests, has changed the complexion of the program.

“It has nothing to do with his coaching. It has everything to do with how good of a person he is, how he speaks to the young men on this team, how he takes care of them, how he’s willing to put us first,” Taylor-Demerson said. “Coach McGuire is a big family man. His family is at the top. You can’t break that barrier, and we are a part of that family.”

McGuire especially made a strong first impression on Taylor-Demerson.

“The first day I met him, he bought Wingstop,” Taylor-Demerson said. “That took my heart away.”

Taylor-Demerson said McGuire bought lemon pepper wings for the team and asked to have them prepared well done.