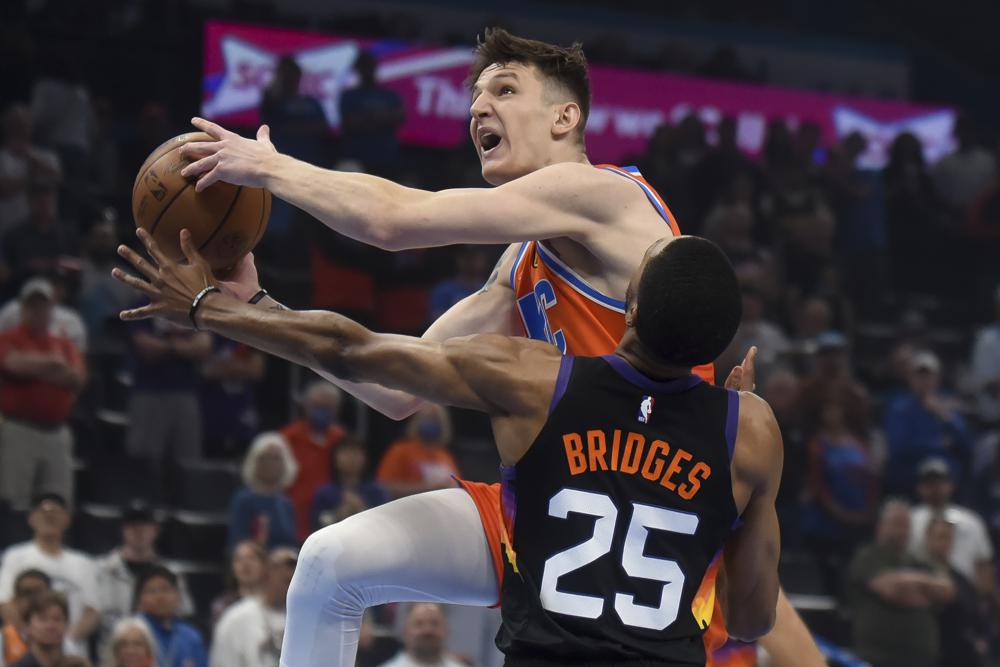 Backup center Olivier Sarr scored a career-high 24 points and Aleksej Pokuveski recorded his first career triple-double to lead the Oklahoma City Thunder to a 117-96 victory over the NBA-leading Phoenix Suns on Sunday night.

Sarr came off the bench to shoot 9 of 12 from the field, including 5 of 6 from 3-point range. The other 7-footer, Pokuveski, had 17 points, 12 assists and 10 rebounds while playing point guard for the bulk of the game.

The Thunder put seven players in double figures and took advantage of the Suns’ worst 3-point shooting effort of the season. Playing without scoring leader Devin Booker, Phoenix hit just 7 of 38 (18.4%) beyond the arc, well below its previous season low of 22% in a January win over Dallas.

Phoenix led by 12 in the first quarter, but the Thunder refused to go away, getting a halftime buzzer beater from Isaiah Roby to go into intermission down 53-52.

The Thunder got the opening points of the third quarter on a goaltending call on JaVale McGee to grab their first lead of the game and held it the rest of the way. Oklahoma City took an 11-point lead into the fourth quarter and doubled it to 22 before Phoenix emptied the bench in the final four minutes.

Thunder: Jeremiah Robinson-Earl is still on restricted minutes after coming back from a foot injury, but he is making the most of his time on the court. In 11 first-half minutes, he hit all four shots, including three 3-pointers, to lead the Thunder with 11 points and also grabbed three rebounds. He finished with 14 points and five rebounds in just 15 minutes.

Suns: Chris Paul got his usual rousing welcome from Thunder fans, who credit him for popularizing NBA basketball in the city when the-then New Orleans Hornets were relocated to Oklahoma City after Hurricane Katrina. Paul sent the fans a message with his game shoes which carried the message “Thank You OKC!!”