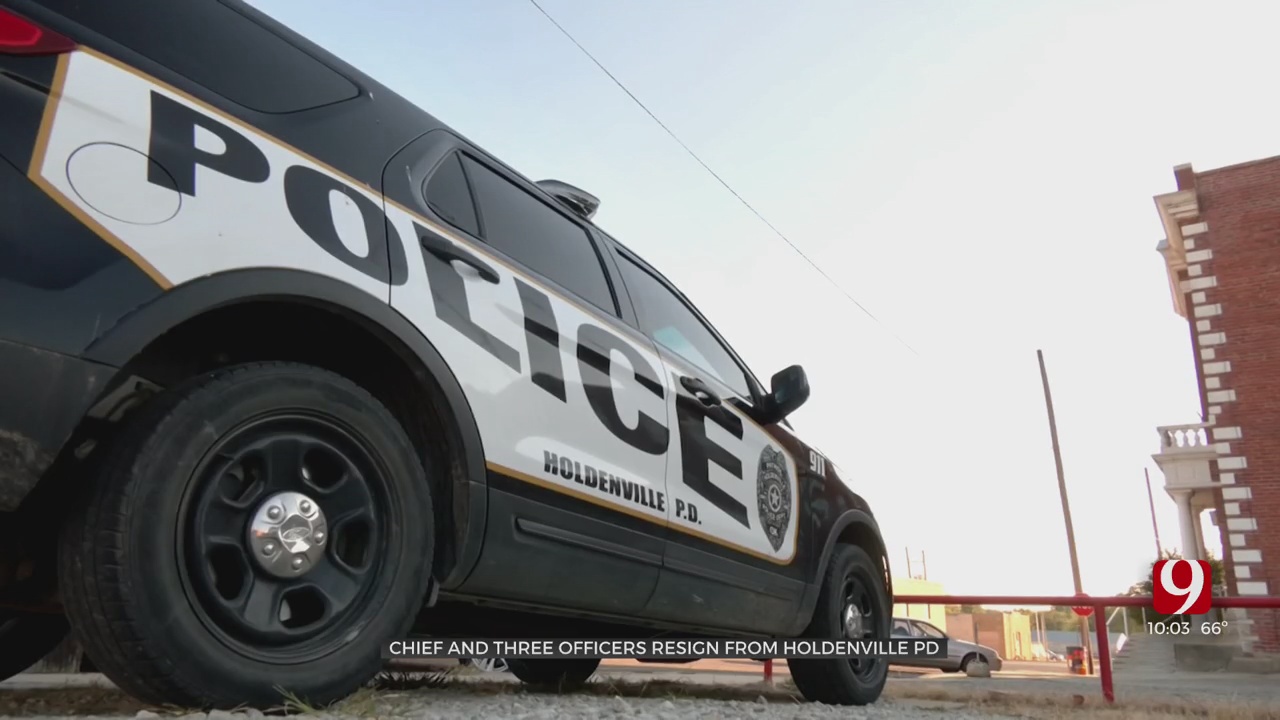 Officials with the City of Holdenville are scrambling to figure out what’s next after the city’s police chief and three additional officers suddenly resigned.

Clay is the former Choctaw chief of police.

The Hughes County Sheriff’s Office and local tribal police have stepped in to help patrol the city while city officials determine what’s next.

“I appreciate everything that Chief Clay did,” said Massad, during Tuesday night’s city council meeting. “He came into this when it was a mess, tried to straighten it up as best as he could.”

In his resignation letter obtained by News 9, the former chief calls out two council members, alleging Bill Freeman launched a campaign to make the chief’s position an elected one.”

Council members are also accused by Clay of breaching his contract for a city vehicle and gas card to commute home.

“I have to work within the law,” said Grizzle. “There is a certain arrest I had to get an arrest warrant on. I couldn’t just go to his house and arrest him out of his front door for the crime that was committed. It was a misdemeanor not committed in my presence.”

Freeman took to Facebook Tuesday night stating there was no written contract between the city and chief regarding a city vehicle.

Clay’s resignation letter can be read in full below:

“To Whom It May Concern:

This letter is to notify you that my last day as Chief of Police of Holdenville will be October 1, 2021.

This decision was not an easy one to make and I apologize for the short notice. When I came to Holdenville, the city council in place at the time was very supportive of me and the police department. They hired me because they said they wanted a professional police department. I attempted to find qualified officers, but they were few and far apart. Last April when Bill Freeman was elected along with three other new council members, the council quickly turned against me. It became apparent that Freeman’s goal was to replace both the mayor and myself. He set out to make my position into an elected office, rather than appointed, which would eliminate my position as chief. Throughout recent weeks, Freeman and Amber Orr have become much more aggressive toward me and the police department, including profanity toward a police officer and myself when Freeman abused his power as a member of the city council and ordered a police officer to make an illegal arrest. Following the incident, his wife posted on social media about how sorry and worthless the police department is.

On September 7, 2021, Freeman started an aggressive campaign against me by breaching my contract in an open meeting of the city council, revoking my benefit of a take-home vehicle. He and Orr continued this campaign by trying to change the position of chief of police to an elected position. Freeman continues to interfere with police business, even after being reprimanded.

If being publicly criticized in open meetings and online by city council members wasn’t enough, on September 21, 2021, Sheriff Marcia Maxwell wrote an open letter to the council and presented it in a public meeting, criticizing both me and my department. I was shocked at this unprofessionalism and public criticism from a fellow law enforcement officer. If I ever have a problem with a fellow officer of the law, I handle it privately and discreetly. I did agree with Sheriff Maxwell that the city council should stay out of police business and stop trying to micro- manage the department, however, I couldn’t believe she chose to tell the entire city instead of coming to me personally. This for me was the final straw. When the citizens, the council, and other local law enforcement agencies are publicly criticizing me, I have no more desire to put in all the hours I have had to put in to hold this department together with only 4 officers (including myself).

I think that Holdenville has a lot of good, decent people that want what is best for Holdenville. With Freeman and Orr swaying the council’s vote, I believe that this department is doomed to fail, regardless of what I do, giving me no other recourse but to resign. The good people of Holdenville need their voices to be heard.”

“Now to address the article of Police Chief Resigning.

In his letter, he stated that my goal after being elected was to get rid of him and the mayor. FALSE. My goal was to find out why there were so many complaints about the PD and why the officers were not happy with this Chief.

He states that throughout recent weeks, Freeman and Amber Orr have become much more aggressive toward me and the police dept, including profanity toward an officer and myself when Freeman abused his power as a member of the city council and ordered a police officer to make an illegal arrest.**** Well, not sure what he means about more aggressive. I haven’t had personal contact or verbal contact with the chief in weeks, other than asking if we had a policy regarding officers involved in shootings. Not being truthful about profanity toward him either. NOR truthful when stating I directed an officer to arrest someone….I asked him to go talk to the perpetrator and go make the victim feel safe! Too much to ask? He also later says I was reprimanded…I have not had any conversations with anyone regarding his false allegations.

He states that I started an aggressive campaign against him by breaching my contract in an open meeting….As I stated in my council summary…There were no written contract. NOR did any of the other council members other than the hiring committee, know of any agreements made before deciding to hire him. Councilman Wulf attested to that in the meeting. I brought an agenda item to limit the distance that a city owned vehicle could go unless on official duty. This was because when you looked at the Chief’s fuel usage, it was considerable vs the officers doing active patrol. Also, driving that distance every day opens the city to liabilities…for example…what if he were to have an accident way over there…if it’s his fault, it’s on the city. If it were someone else’s fault, then he would qualify for Work Comp as he was in a city owned vehicle. Also, the amount of maintenance vs patrol cars here. The mayor says all the time, the city is broke…well, we need to cut where we can then.

He states that myself and Orr are trying to change the Chief to an elected position. TRUE! But even if/when we do, that would be after he is no longer chief. So it’s not doing a thing against his job. Just saying that if he were to quit or retire, then the vote would be returned to the people. That is what many of the town people have asked to happen for a long time now. WE AS COUNCIL MEMBERS are supposed to consider what the citizens are wanting done for their town…are we not? This isn’t a dictatorship! So, I am not sorry for bringing that up.

Then he laments about the letter from the Sheriff. All I can say here is that I have been told by members of law enforcement that other agencies that come to town, want nothing to do with our chief. They felt he was incompetent and did not have his officer’s back. Especially after he refused to show up and relieve the 2 officers after they were shot at.

He speaks about the part of the letter regarding council members. Had he actually spoke to the Sheriff, like I did, he would have learned that that was over some officers being called out for being at the Sheriff’s dept for a while…only to find out that they were there doing reports on the shooting and trying to get their adrenaline levels down before going back out on patrol. She even stated that it had nothing to do with my issue with an officer, as she said that what she was told by the officer and the chief were different.

You know, at the end of the day….it’s very frustrating to be called out continually for trying to do the job of a council member. To make the changes needed or just to open the dialogue about moving a certain direction. This is just another form of their bullying. They want us to “get in line” and it’s just not going to happen. Will I always be right? Absolutely not. But I will always have the best interest of this town and it’s citizens….AND I know that this is true of Amber Orr as well as the others not mentioned in the Holdenville Enquire.

Thank you for taking the time to read the facts behind the myths.”

Another meeting is scheduled for Thursday evening to address some issues, the mayor said.