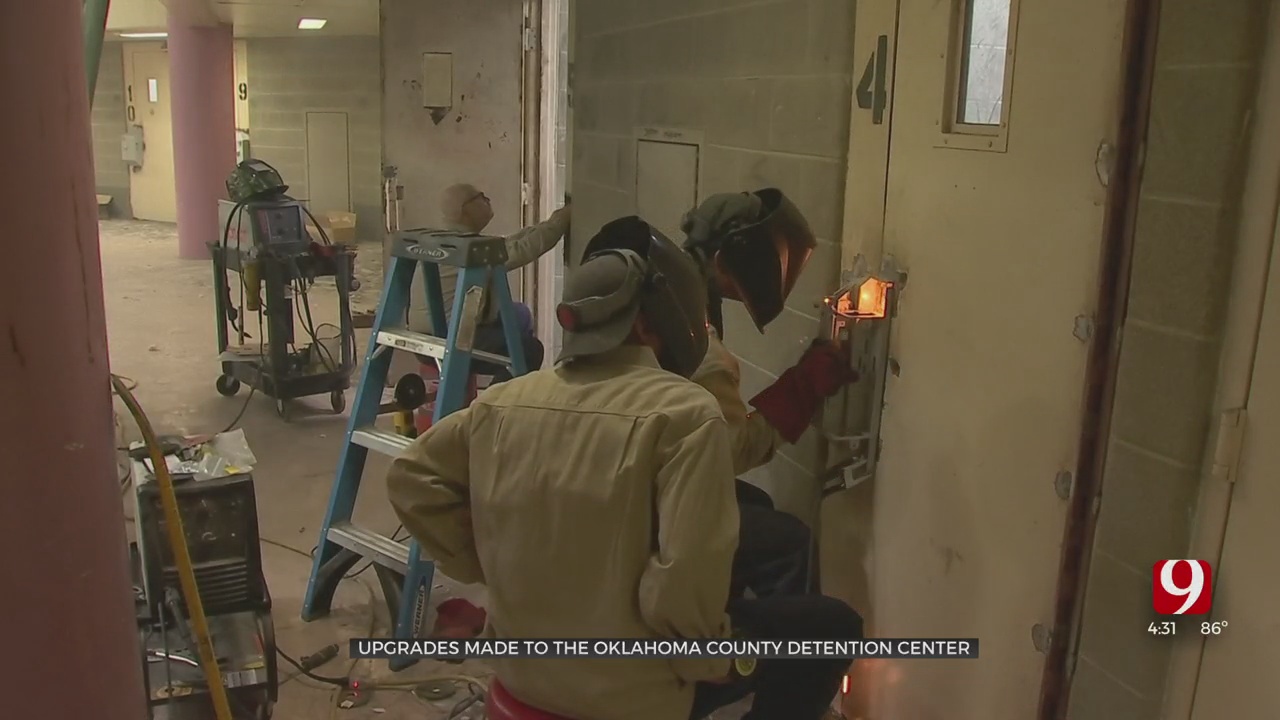 The Oklahoma County Detention Center has made some upgrades thanks to the CARES Act. Staff said the changes have eliminated several issues plaguing the jail.

Water puddles in the basement, showers, and maintenance rooms, mold throughout the facility and the inmates' ability to pick cell locks are all problem areas the jail has addressed with the pandemic funds.

"Almost a year and a half ago, we cleaned up water every shift, every day. We spent three or four hours a day cleaning up water," said Dale Frey, the jail's facility director.

The Jail Trust has already spent $10.3 million of CARES Act funds to fix a plethora of problems staff and inmates have dealt with for years. One of those issues is stagnant, puddled water.

"They were putting stuff in the sewage system, plugging it up, and then flooding the whole building," said Frey. "Sheets, towels, batteries, concrete, everything."

Now, there is a new water management system that allows one flush every five minutes. If an inmate tries to flush a second time in five minutes, it will stop mid-flush. The inmate will not be able to flush then, for an hour. Water to the sink and showers is not cut off when toilets are locked. Jail staff can also lock one inmate's toilet, or an entire floor from the control room.

"The yellow 'number 4' means that he tried to flush it four times after it was locked out and sometimes, I've seen them up to 150 or so flushes trying to get it to flush. Especially if they think somebody is going to shake the cell down," Frey said.

The system also makes other equipment last longer, which saves money in other places. Sewage grinders used to break and need to be replaced multiple times a week. Since the new water system has been in effect, staff hasn't needed to change or fix the grinder in seven months.

That's not the only place the new system saves dollars.

HVAC upgrades and an ionization system moves pull fresh air inside the building, something not possible before.

Cells are also in the process of getting new locks and hinges installed. The new equipment will be installed by the pod, which houses a few dozen cells each.

"They aren't able to get through them to get out. The old locks, they could stuff paper in, sheets, to pull the locks back and get out when they wanted to," Frey said.

The new locks will also add to inmate safety in case of an emergency. The old locks needed to be opened by a detention officer one-by-one with a key. New locks are controlled electronically and can all be opened at once.

Several other issues like access to hot water have also been addressed. The jail now has hot water on demand.

Frey said inmates may need to wait a few minutes in the showers before the water gets hot, much like bathrooms at home.

Previously, Frey said, the water never even warmed up at times.

Jail staff also spray for bed bugs regularly, with each floor sprayed around every two weeks. Frey said bed bugs are a tough issue because people bring the pests inside the building, too.=

Frey said the jail has come a long way in the last year, but they have more work to do. That includes a new roof, more the HVAC upgrades and new elevators.