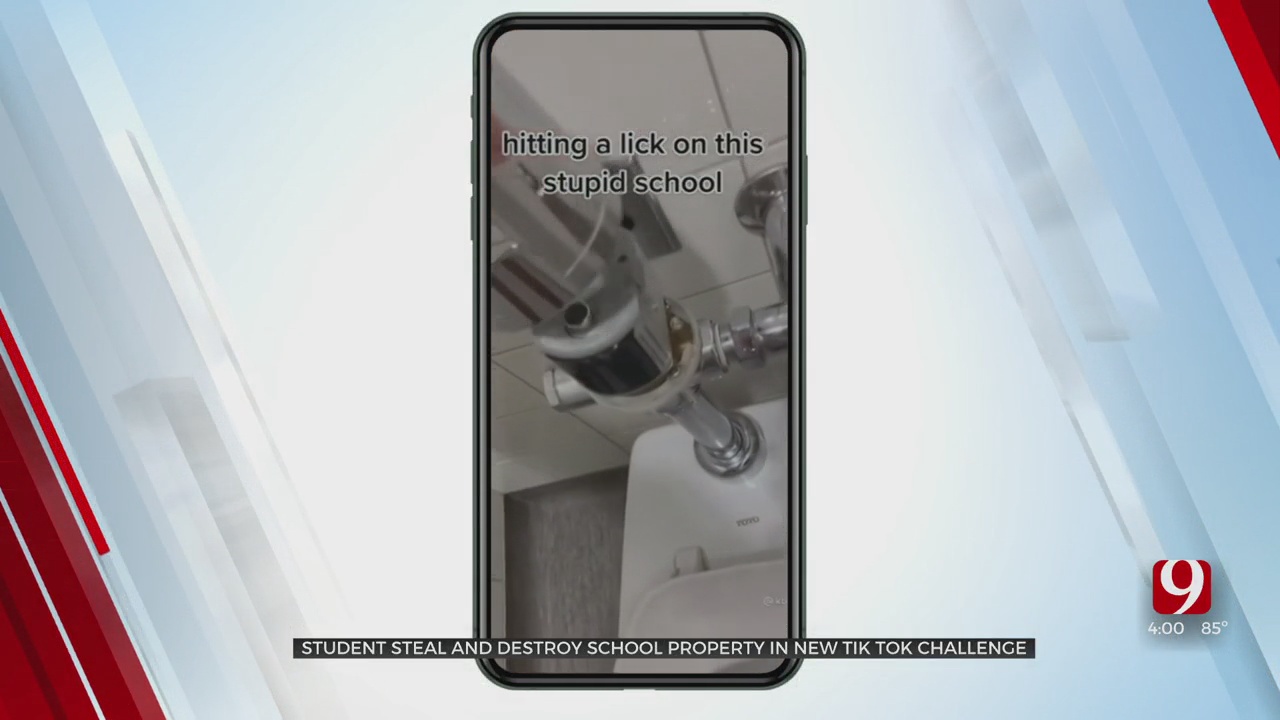 A viral TikTok challenge, called the "Hit a Lick Challenge,” features students recording themselves stealing items or vandalizing their school.

Edmond and Mustang school district officials said they've had students participate in the TikTok challenge and have already taken action.

Many of the videos have since been removed but many of these videos across the country are going viral.

If someone says they got a "lick" on TikTok, it means they stole something.

Parents from Mustang Public Schools and the Putnam City School District have also said their children have alerted them of this challenge. Putnam City school officials declined an interview.

"If your child uses social media, please talk to him/her about being socially responsible and kind; this “challenge” is criminal behavior, not an innocent prank,” the statement read in part.

The statement goes on to call it a disturbing trend and students needs to work together to put a stop to it.

TikTok has said publicly the company is removing content and redirecting hashtags related to the “devious lick challenge.”

I Hope this email finds you well. I wanted to make you aware of a few things that have been going on at school.

1. This sounds crazy but students are stealing or damaging our hand sanitizer and soap dispensers in the bathrooms and around the school. Unfortunately, there is a TikTok challenge going around the country in which students steal or damage school property, record it, and post it on TikTok or other social media platforms.

Stealing and damaging property is never acceptable, however, stealing soap and sanitizer keeps students and staff from being able to properly wash and sanitize their hands while we still have multiple COVID cases in our school. Just today a parent called to complain that there was not soap in the restroom. When we went to investigate, we found that the soap dispenser was missing. Please be aware of this and know that we will have to give consequences for theft and vandalism.

2. Some students participated in a silent protest today against school dress code. Allegedly, students communicated through TikTok and other social media platforms and organized a silent protest in which multiple students wore clothing that was in violation of dress code. Some students put up signs around the school as well. While this happened at our school today, this is a common trend across the country. The overall message of these protests is that school dress codes are outdated, focus more on girls than boys, and are not fair based on body type. There are certainly truth to each of these. We want our students to be able to express themselves and their individuality. However, we also have a duty to help prepare students for life after high school in which they will have jobs that require a particular dress code. Our goal is not to surpress students and their individuality but to prepare them to meet expectations by an employer or supervisor.

A few things to note regarding dress code:

-So far this year we have not given consequence for dress code, other than asking them to change or giving them a shirt/clothing so that they can meet the minimum dress code requirements.

-Often times students wear an inappropriate shirt underneath a zip-up hoodie or jacket. Sometimes boys may not even wear a shirt under their jacket and girls may be wearing something that resembles a bathing suit. They unzip their jacket when they get to school. We give them a shirt or ask them to zip up their jacket, which they do...for a while until they are corrected by another administrator or teacher.

-Another issue, mostly with boys, is students wearing shirts with inappropriate words or images.

To be honest, we have been pretty lenient on dress code so far this year as we have wanted to focus more on getting students to class and getting caught up on learning after being out of the regular classroom setting for so long. We as administrators are willing to have conversations about appropriate dress code while still being able to prepare students to follow a professional dress code in the future.

3. Skipping class and being tardy - We are having an abnormal amount of students be late to class or skip class this year. Just today, 175 tardies were recorded! Students have been assigned lunch detention once they get 5 tardies in one class period and consequences will grow from there. Again, like dress code, we feel a responsibility to prepare our students for life after high school and being on time and productive are 2 of the basic requirements for any job or career. We want them to develop this habit now so they can be successful in the future!

Thank you for your time and thank you in advance for having a conversation with your child about these issues!