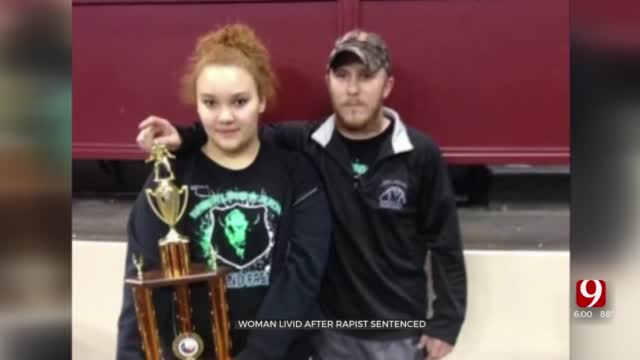 Aleece Cooper was 15 when she was assaulted by her wrestling coach.

A rape survivor spoke out Friday saying she does not feel her case was settled fairly in Oklahoma County court.

Aleece Cooper was 15 when she was assaulted by her wrestling coach.

“There is not a single day where I don’t think about it, because it was so traumatic, because I was a 15-year-old girl,” she said.

“It affects a lot of things, especially with like, relationships, because it’s just nerve-wracking that anybody can do that,” she said.

Patrick John Luhm pleaded guilty on Wednesday to first-degree rape by instrumentation and felony soliciting sexual conduct with a minor in a deal with prosecutors.

Luhm had been Cooper’s wrestling coach for five years.

She had won state and national wrestling championships.

But she never went back after the rape.

“I was extremely upset because of what happened, because I loved to wrestle, and it made me not want to ever do it again,” she said.

When Luhm was sentenced this week, Cooper’s family had no idea.

“I just started crying at the kitchen table because it was upsetting. I sat here for years and years just wondering why he wasn’t in jail,” she said.

To Cooper, the short sentence was stunning.

“There are people going to jail for drugs and stuff for life, when someone who touches kids is only there for three years. I would have hoped for at least 15 years,” Cooper said.

Cooper said that in the years this case has been moving through the court system, she has never had the chance to face her perpetrator in court or speak in front of the judge.

She wanted to give a victim’s impact statement at the sentencing.

Patrick Luhm was sentenced to three years in prison with 15 suspended. He will have to register as a sex offender.

News 9 reached out to Luhm's defense attorney for a statement but did not get a response.

We also reached out to David Prater with the Oklahoma County District Attorney’s Office, but he is out of the office.