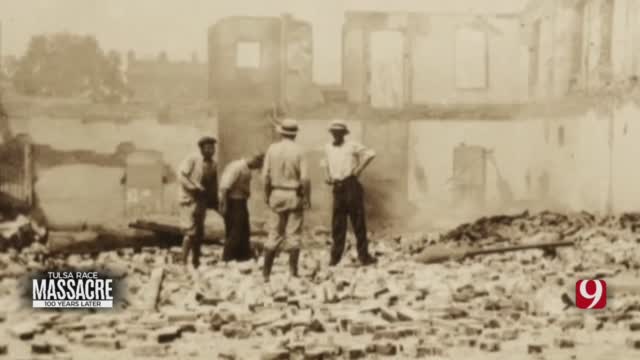 No one was ever brought to justice in connection with the deaths in Greenwood.

Rumors of a coverup involving mass graves lingered for years.

In 2018, the City of Tulsa began investigating those rumors.

Then in 2020, archeologists found an unmarked grave with at least 12 bodies at a site many had long suspected: Oaklawn Cemetery.

Could these murders ever be solved 100 years later? Oklahoma's Own talked with a man who worked 450 murder cases about what it would take. And looks at were the search for answers goes from this point.

Sergeant Dave Walker served with the Tulsa Police Department for 35 years, and the last seven years he was head of the Homicide unit—tracking down killers and bringing them to justice.

Walker said the challenges of solving a 100-year-old crime are not being able to visit the crime scene as it was, having witnesses who have died, and evidence that has disappeared.

But he said the principals are the same in the past as they are now when it comes to solving crime.

Based on his research and understanding of the massacre, how planned it seemed, and how fast it grew from a mob to something much more, Walker believes the crime was in play before that night.

“I would initially think we are looking at a conspiracy and from the suspect’s point-of-view, there are meetings, going to be talking.. and how do we do it today? You’d have to break into that group, and how you do that is go[ing] back to the written world and their history,” Walker said.

He said just like how we have heard from the victims about their experiences and from descendants about all the things they had heard over the years, we now need to hear from the suspects’ family members and see their diaries, notes, and old papers.

“It is going to be hard to find who shot what and that sort of thing, but you can get to the person who said ‘this is a good idea.’ If we get to that person, we’d all feel a little bit better that we did something,” Walker said.

He said technology also plays a role in solving the murders.

If a bullet or slug is recovered from any possible mass graves, the National Integrated Ballistic Information Network might be able to do a comparison between that slug and weapons in museums to see if it can be tied positively to that weapon.

Walker said it would take a team effort with investigators, archaeologist, and historians. But, he said, like most cases, it comes down to someone talking—great-grandchildren or other relatives of those who planned and carried out the massacre.

“Somebody knows something that can break this wide open, and if you have got that in your chest, down in the basement, or up in the attic, go dig it out and give it to somebody. If you are afraid of repercussions, call me; I’ll go get it and do it anonymously,” Walker said.

Sgt. Walker said even though the suspects could not be prosecuted now, there si some peace in getting answers, some healing in knowing the truth.

“I would like to see it solved; the murder victims never forget. I never forget the murders we solve, by we do move on,” Walker stated.