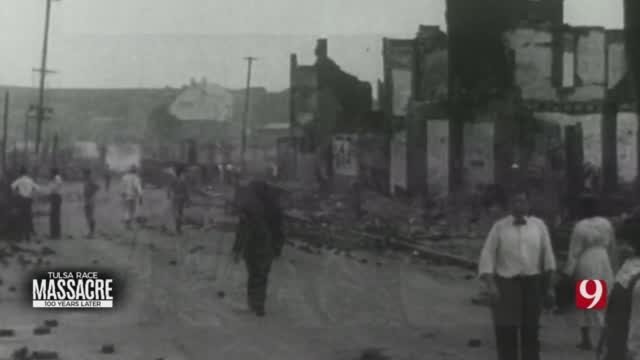 It all started inside an elevator at what was the Drexel Building on Main Street in Tulsa.

We will never know exactly what happened, but we do know an African American man by the name of Dick Rowland possibly tripped into, or stepped on, the elevator operator Sarah Page.

Her scream—sounding the alarm—sparked one of the darkest times in Oklahoma history.

This was the headline the next morning on May 31, 1921: “Rowland arrested accused of assault” as rumors ripped through white neighborhoods about what happened.

2,000 people rallied at the courthouse where Rowland was being held.

As rumors of a lynching spread, some Black Tulsans gathered to defend Rowland.

At 10 p.m., a white man tried to take an African American’s gun during a fight, and it went off. The shot triggered chaos in the streets.

White men, including police, robbed a sports store across from the courthouse and stole all the guns and ammo they could get their hands on.

The Police Chief rounded up his entire force of 65 men, according to the Tulsa World, and the commissioner recruited possibly 400 veterans and called them “special deputies.”

As fighting rumbled in the roads for hours, African Americans eventually drew back to Greenwood.

Reports say the Senior of the Tulsa National Guard wanted to create a perimeter around Greenwood, but just did not have the resources.

Finally, at 1:30 a.m. the National Guard was requested via telegram.

With echoes of gunfire somewhat slowing overnight, many assumed the massacre was ending. But dawn awakened the angry white mob that was strengthening in numbers—up to 1,500 men—and included some citizens who were deputized by the police chief.

Historians vary exactly on what happened—whether it was gunfire or small flammable objects—and exactly how much of an impact they had on the attack.

As African Americans watched their booming business district burn, many escaped. Others were protected by their employers. And some stood their ground and tried to fight but were overwhelmingly outnumbered.

Everything Black Tulsans had worked so hard for was gone in a matter of hours.

Greenwood was a ghost town with bodies in the streets, and the haunting truth hidden under the rubble.

Historians believe the death toll could have been up to 300. However, the state officially recorded 36: 26 African Americans and 10 white.

With so many unanswered questions, history is still being written 100 years later.

The elevator operator, Sarah Page, ended up asking for the charges to be dropped within hours of the massacre.